Millionaires declare themselves to be a minority group - Canary 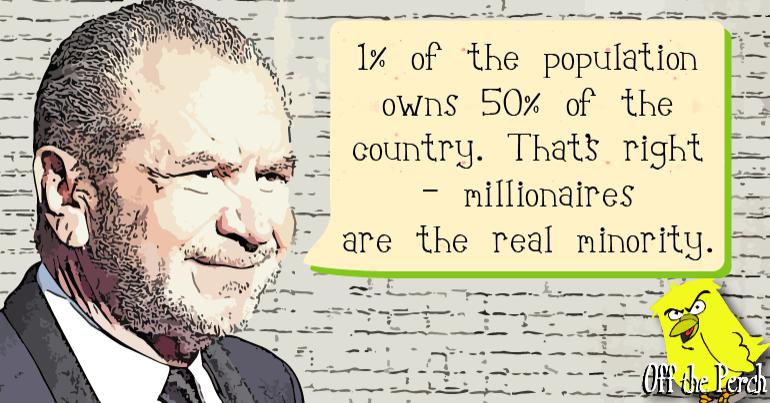 Lord Alan Sugar has become the only celebrity/politician/millionaire brave enough to speak out against mild socialism:

I have to do it no one else will @jeremycorbyn is tough to undermine in the eyes of his adoring followers. He’s been spouting same nonsense for 40+ years.His fanatics sense there is a chance to get into power,They look other way when required.Its been a long time coming for them https://t.co/KrljErVjc4

Fair enough, right? After all, 50% of the country is owned by 1% of the population. And I don’t know about you, but 99% of the country having a go at the other 1% sounds like bullying to me.

This is why millionaires have now joined together to fight for their rights.

Speaking on behalf of his fellow millionaires, Lord Sugar tweeted:

All these jealous loosers [sic] wouldn’t even have jobs if not for me!

When someone pointed out Sugar wouldn’t have anything if not for the many, many, many employees who make his empire possible, he replied:

Another looser [sic] who wants something for nothing! That’s all socialism is – just people with no skills begging for handouts.

Sugar then got on the helicopter he bought with his last tax cut to go to his job at the national broadcaster – a job in which he gets paid hundreds of thousands of pounds to point at millennials and insult the way they sold bean bags to sales executives or some shit.

Labour has done a lot to suggest it will work for the interests of the many since 2015. It’s not done as much as these panicking millionaires, however.

Every time they open their mouths, more and more people realise what a scam this country is.