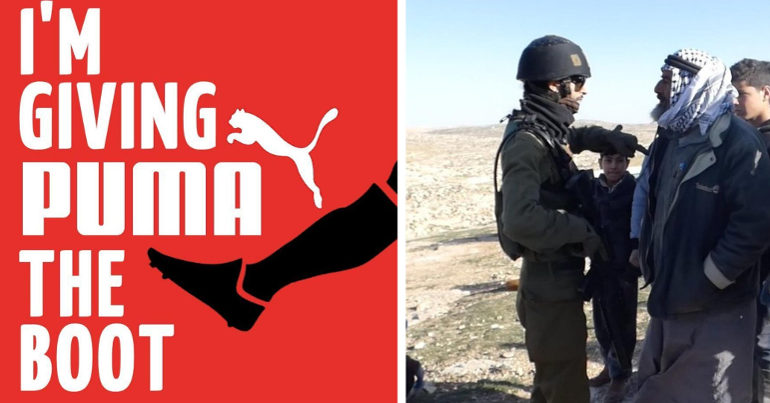 Thursday 18 April is sports giant Puma’s annual general meeting. But while the company’s directors and investors celebrate annual growth, a Twitter-storm is taking place, urging us to boycott the brand.

Puma is the main sponsor of the Israel Football Association (IFA), which includes six football clubs in Israel’s illegal West Bank settlements. These settlements are located on land stolen from Palestinians, and are gradually swallowing up what’s left of the West Bank.

The colonisers who live in the West Bank settlements routinely terrorise their Palestinian neighbours. Human rights activists accompany Palestinian children to school so that they’re not attacked. And shepherds are frequently targeted as they walk with their sheep in the hills.

Meanwhile, the colonisers continue to kill with impunity. On 18 April, an Israeli settler reportedly killed 42-year-old Fatima Suleiman. He deliberately rammed into her car with his truck. When she got out of her car, he ran her over. According to local news, Israeli soldiers confiscated CCTV footage documenting the murder.

And on 3 April, settlers shot Muhammad ‘Abd al-Fatah dead. The Israeli army erased the evidence of the crime.

More than 200 Palestinian sports clubs have signed an open letter to Puma. They state that:

Palestinian players are routinely attacked, imprisoned and killed. They are denied the freedom of movement to attend their own matches. Palestinian stadiums have been bombed and destroyed. Israel even prevents Palestinians from importing football equipment and developing football facilities.

By sponsoring the IFA, Puma is normalising apartheid. As a brand that is familiar to millions, people see the logo and feel comforted. Puma is, therefore, complicit in enabling Israel to appear as a democratic, peaceful country. Meanwhile, Israeli forces have murdered 3,418 Palestinians in the last ten years.

Activists are calling on Puma to stop sponsoring the IFA. And until this happens, they’re asking you to boycott Puma, arguing that it is a “proud sponsor of Israeli apartheid”.

Let @Puma know you will respect the call from Palestinian athletes to #BoycottPuma until it ends support for illegal Israeli settlements pushing Palestinian families off their land. ►https://t.co/tRWeKZprSK pic.twitter.com/BPUOtoRD9a

As long as Puma sponsors teams in illegal Israeli settlements pushing Palestinian families off their land, I will respect the call from Palestinian athletes to #BoycottPuma. pic.twitter.com/aGwPB8hTVe

Do the right thing

Puma founder Rudolf Dassler was a Nazi party member, so the company has already been on the wrong side of history once.