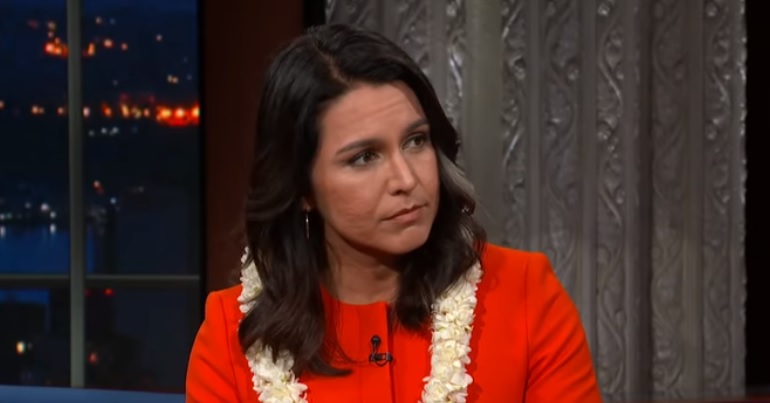 2020 Democratic presidential hopeful Tulsi Gabbard has once again slammed US ‘regime change’ wars. The Iraq veteran tweeted out a video of her discussing US foreign policy with comedian-turned-commentator Stephen Colbert. Gabbard, a major in the Army National Guard, told Colbert:

Gabbard is a member of the highly influential invite-only Council on Foreign Relations. She continued by saying:

history has shown us that every time the United States goes in and topples these dictators we don’t like, trying to act as the world’s police, we end up increasing the suffering of the people in these countries; we end up causing loss of life – both American lives and the lives of people in these countries; we end up undermining our own security; what to speak of the trillions of dollars of taxpayer money that’s spent on these wars that we need to be using right here at home.

The text of her tweet was even more explicit, saying “regime change wars cost millions of lives” and “strengthen terrorist [organisations]”:

There are bad people in the world, but we can't be the world’s policeman. Regime change wars cost millions of lives, strengthen terrorist orgs, undermine our national security & waste precious money that should be used to improve the lives of the American people. #Tulsi2020 pic.twitter.com/XtZUr5uO4w

US congressman Ro Khanna, meanwhile, recently reiterated this point about investing at home rather than in war. He gave China as an example of how such a policy could turn out:

President Jimmy Carter this weekend offered the most profound insights of any modern politician in what America must do to win the 21st century. “Since 1979, do you know how many times China has been at war with anybody?” Carter asked. “None. And we have stayed at war.”

A ‘force for good in the world’

Colbert did box Gabbard into agreeing that the US “is a force for good in the world”. He remained apparently oblivious to her telling him that the US and its allies had covertly supported the arming and training of “terrorists” to overthrow the Syrian government; and that “terrorists” had also used chemical weapons. Colbert’s response was to say that, if the US steps “away from the world stage in a significant way, that might destabilise… the world”; and that he believed it was “a force for good”. To her credit, Gabbard did respond by saying that, in order to “be a force for good”, the US must “actually do good”.

Hard against regime change, but soft on ‘War on Terror’?

It’s worth noting that Gabbard seems not to have come out against the so-called ‘War on Terror‘, which has also caused untold suffering and misery around the world. And there are genuine concerns that Gabbard may still hold an imperial world view. But she has shown growth over the years, and there is no reason that US citizens can’t potentially push her in an even more enlightened direction regarding the entirety of US foreign policy.

Featured image via The Late Show With Stephen Colbert-YouTube