'Out, traitor, out!' Ecuadorians respond to their government's betrayal of Julian Assange. - Canary 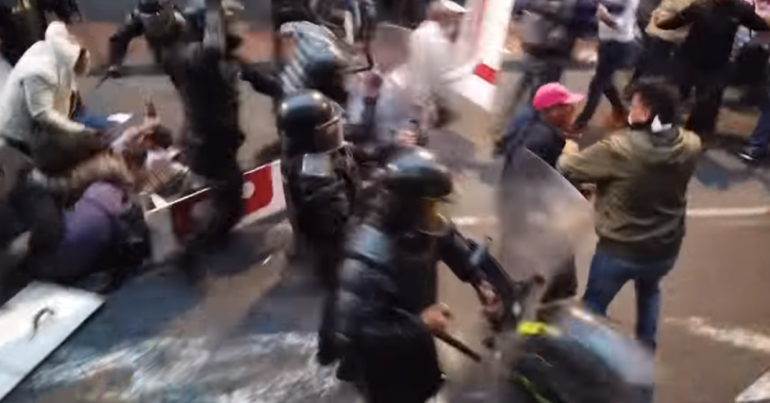 Protests swept the Ecuadorian capital of Quito on 16 and 17 April, as thousands took to the streets in response to the Lenín Moreno government’s “betrayal” of WikiLeaks founder Julian Assange. Many of the protesters are supporters of former Ecuadorian president Rafael Correa, who said Ecuador’s withdrawal of Assange’s asylum on 11 April was “a crime that humanity will never forget”. Ecuador’s tightening links with Washington and international finance, combined with an ongoing corruption scandal, are also a source of major concern in the country.

Police clashed violently with protesters in Quito on 16 April. The latter could be heard chanting about Moreno: “Out, traitor, out!”:

In solidarity with WikiLeaks, meanwhile, hackers have also attacked the websites of Ecuadorian and British authorities. Ecuador has reportedly been hit with 40 million cyber attacks since Assange’s arrest.

BBC and the Guardian

Utterly disgraced president @Lenin Moreno allowed to make outrageous allegations, easily refuted by facts, about #Assange including that he is a “cyber terrorist” and make false claims about WikiLeaks publications. Have you no decency @BBCWorld? pic.twitter.com/sftDuTSLg5

Though Assange was under heavy surveillance in the Ecuadorian embassy, little evidence has been produced to justify claims about Assange’s conduct there. The closest they have come is showing Assange skateboarding in the embassy.

Notice how the Guardian is now the go-to place for vassal state politicians – Ecuador's Moreno, Venezuela's Guaido – to convey propaganda on behalf of the US national security state. And the Guardian has the gall to call such stenography an 'exclusive' https://t.co/WnyWfD19xn

The Guardian profited from WikiLeaks after Chelsea Manning shared thousands of military and diplomatic secrets in 2010. Since Assange entered the Ecuadorian embassy in 2012, however, the Guardian has published stories filled with disdain and unproven allegations about the WikiLeaks founder.

Contravention of all laws

Pink Floyd musician Roger Waters has been an outspoken critic of Washington’s treatment of whistleblowers and journalists. On 17 April, he claimed Assange’s removal from the Ecuadorian embassy and arrest by British police was in:

This sentiment was supported by Ecuador’s former foreign minister, Guillaume Long. According to Long:

When Mr. Assange was apprehended in the… Ecuadorian embassy in London, he was still Ecuadorian. He was naturalised Ecuadorian, and as far as we know… the Ecuadorian state still hasn’t concluded the process of stripping him from his nationality.

So this is really serious. It’s in breach of… certain things in international law; but it’s really in breach of the Ecuadorian laws and constitution.

Assange’s arrest has provoked a serious response in defence of press freedom both inside and outside of Ecuador. May it continue.