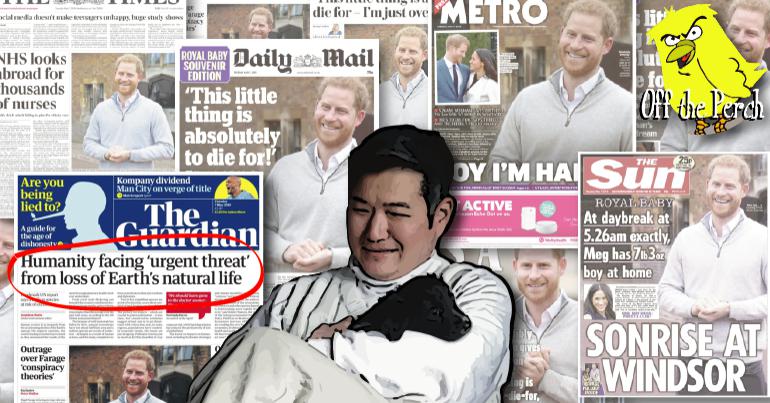 ANOTHER ROYAL BABY HAS SPRUNG FORTH!

How many is that now? 6? 37? 48,534? It’s certainly not enough. After all, if it wasn’t for these apparently important sprogs, HOW WOULD WE DISTRACT OURSELVES FROM THE POST-CLIMATE APOCALYPSE WE’RE INFLICTING UPON OURSELVES!?

In a few decades’ time, the planet may be uninhabitable. Unless of course you’re a royal super baby. As we all know, the Windsors can withstand temperatures of up to 400°C. They can also exist in the vacuum of space. Most of them can fly and defecate rainbows.

A newspaper editor told us:

In the event of the climate collapsing, the only thing saving us will be our royal overlords. Perhaps they’ll drag the entire planet a few million metres to the left so things cool down a bit. Or maybe they’ll fly us all one by one to a new planet.

This is why we’re putting so much focus on the royal offspring. That and because Rupert Murdoch said we have to.

ADAM BOULTON: The environment? Who has time to give a fuck about that shit?

ALSO ADAM BOULTON: I'VE BEEN THINKING ABOUT ROYAL BABY NAMES AND I HAVE SOME IDEAS https://t.co/p5ukfBtzef

Scientists are in disagreement over the media’s position. One biologist described it as:

The dumbest fucking shit I’ve ever had the displeasure of witnessing.

Others have described it as:

Regardless of which side is proven right, it’s clear we can all agree on one thing. Stories about babies are less terrifying than climate breakdown.

The problem is we should be terrified.