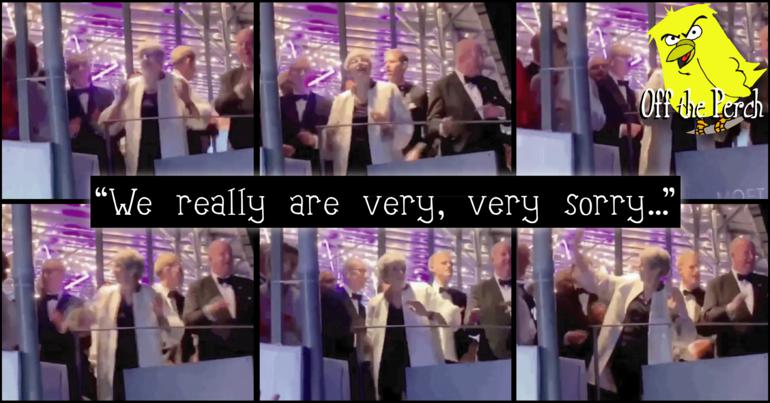 On 14 July, the England team won the Cricket World Cup. Joy soon turned to dread, repulsion, and horror, however, as the victory prompted Theresa May to once more do the dance.

When she arrived at the cricket match, she told one journalist:

Upon victory, she launched into the dance that’s alternatively known as the ‘Maybot’ and the ‘Oh God, Please Make it Stop’. One terrified onlooker said:

She has so many sharp angles. When I looked up and saw it, I thought someone had tipped a draw of cutlery out over my head.

May first unveiled the May dance at the Tory conference. Appearing on a stage cast from the compressed ashes of all the human beings she’s destroyed, May proceeded to jive like a praying mantis on the mass grave.

The England cricket team has since issued an apology.

Look, we really are very, very sorry. We thought she only danced when confronted with people who have less money than her; we didn’t realise a happy event might set her off too.

May’s legacy is pretty much secure at this point; she is, without doubt, one of the most useless prime ministers we’ve ever had. It seems like she’s trying to distract from that by making herself ‘the PM who did that awkward/nauseating dance’. She’ll fail to distract most people because of the aforementioned uselessness.