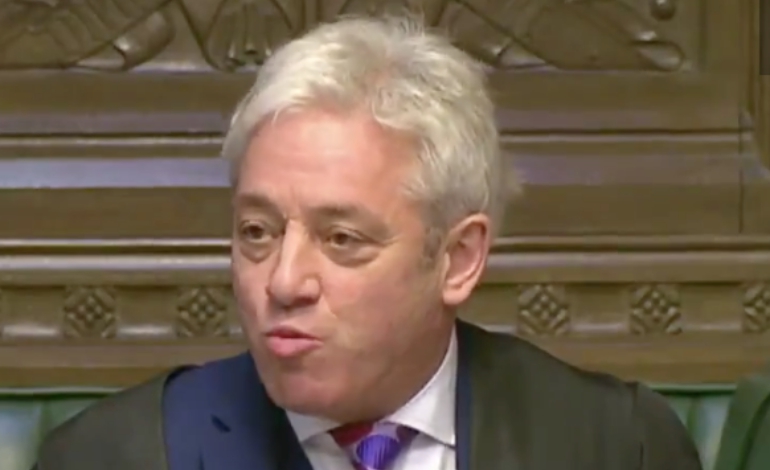 Prime Minister’s Questions (PMQs) often finds me shouting at the television. But today, I was forced to turn the volume down. I just couldn’t bear it. It wasn’t just the pathetic platitudes from our so-called Prime Minister that had me screaming. It was the abhorrent behaviour from MPs; behaviour that led to the Speaker, John Bercow, giving them a dressing down.

MPs behaved like naughty school kids when Jeremy Corbyn was trying to ask questions. And it was left to Bercow to issue a reprimand:

Both sides of this house will be heard. And the idea that when somebody is asking a question there should be a concerted attempt to shout that person down is totally undemocratic and completely unacceptable… Give some thought to how our behaviour is regarded by the people who put us here.

“Give some thought to how our behaviour is regarded by the people who put us here” says John Bercow to noisy MPs #pmqs pic.twitter.com/aXip0m0EIn

Well, I can tell you how it made this voter feel. I felt utterly disgusted hearing a load of mostly male, overprivileged voices shouting down democratic debate. And I wasn’t the only one:

#PMQs
Listening to Tory MPs cheering/jeering like adolescents is depressing. They're such a poor example of leadership for this country.

And Labour MP Laura Pidcock summed up what appears to be many Conservative MPs’ attitudes towards the issues that the UK faces:

And it isn’t as if the questions, when Corbyn was finally allowed to ask them, got any meaningful responses. Whether it was Universal Credit, police cuts, or the state of our education system, May deflected and ignored the central claims of all the questions. Instead, she relied on sound bites – full of sound and fury and signifying absolutely fuck all:

May says the Tories are "building a Britain that's fit for the future", says Corbyn "may have brought momentum to his party but he brings stagnation to the country" #PMQs

Our country is run by a bunch of out-of-touch politicians who think it’s hilarious to jeer about questions that concern poor and vulnerable people across the country. In fact, they are displaying behaviour I wouldn’t expect from my teenage son. Corbyn has promised a “kinder politics”. And this has to start with how MPs behave in parliament.

It’s no wonder that so many of us are sick of parliamentary politics. Because at the moment, we have a system that makes a mockery of the concept of democracy. MPs sit in parliament because we voted for them. And their behaviour makes me want to take to the streets to get rid of them once and for all.

– Support The Canary so we can continue our work.