‘Nothing in Daniel Blake is exaggerated,’ says the vicar who runs the food bank where it was filmed [VIDEO] - Canary 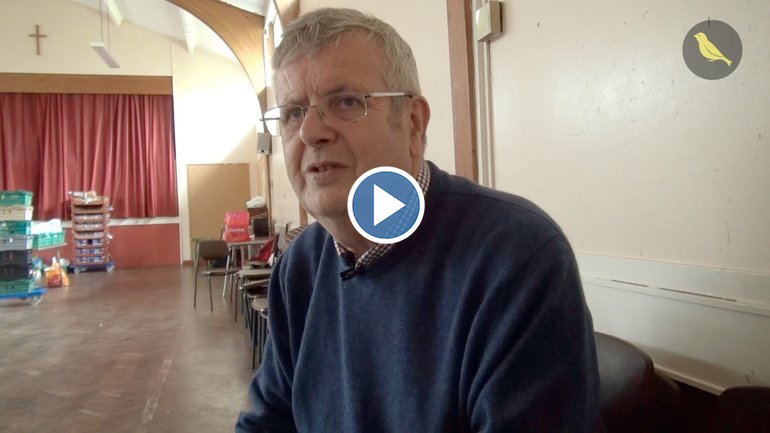 Some of the key scenes of Ken Loach’s acclaimed film I, Daniel Blake were filmed in Newcastle’s West End food bank. Now, the vicar who runs it has told The Canary that “nothing in Daniel Blake is in any way exaggerated”.

The food bank is already the busiest in the country. It gives out emergency food parcels to around 46,000 people a year. Michael Nixon, who manages the food bank, fears these numbers could double as Universal Credit is rolled out to disabled people and families.

Nixon says in an exclusive film for The Canary that the Conservative government’s flagship welfare policy could push thousands more people into desperate poverty in Newcastle:

My concern is that we have a massive raft of people who are just above the limit of needing the food bank… And we think the Universal Credit rollout is likely to throw these families into more need and we’ll suddenly see them.

And the problem is we don’t know how many there are so we can’t prepare for it… We’re already the busiest food bank in the UK… Our numbers could double in the next six months.

Universal Credit – which combines six benefits into a single payment – has been repeatedly criticised by Labour Party leader Jeremy Corbyn for leaving people in poverty without money for six weeks. It has also been attacked by councils, charities, and even Tory MPs.

Food banks in areas with full Universal Credit have recorded an average 30% increase in referrals since April, compared with 12% in parts of the country not yet covered by the new system.

But the government has refused [paywall] to halt the rollout to disabled people and families with kids. Currently, 50 new areas are being added every month.

In the film, two men picking up essentials from the food bank explain how universal credit has affected them.

Former homeless man Nicholas Hickwood, who had to wait six weeks before he got his first Universal Credit payment, says: “I had to come to food banks… I was living on Cornflakes and whatever I could get.”

Newcastle Council tenant Dave Ravel went a whole month without money. He got by with help from his family and food banks. But he couldn’t pay his rent so he received an eviction letter. “I said it cannot be right,” he says. “How can I give you £315… when I’m only getting £312? So what do I live on?”

People on Jobseeker’s Allowance in the city have already been moved on to Universal Credit. Since March, the Jobcentre in Newcastle’s West End has been moving disabled people and families with children onto Universal Credit when their circumstances change or when they make a new claim.

Nixon, who is also an Anglican minister, is not surprised by these stories, because the welfare state has been replaced with something punitive.

If people are able to go out and work… let’s encourage them to do that…. But those are not the people we see here… 90%… need help and need it urgently.

Nixon worked with Loach on the film I, Daniel Blake, which shows the reality of life on benefits. Some of the film’s key scenes were shot in the West End food bank:

Daniel Blake was filmed here after an awful lot of research. And nothing in Daniel Blake is in any way exaggerated. We see situations worse than Daniel Blake every week of the year.

Nixon thinks the numbers using food banks tell us something about the country that Britain has become:

The scenes The Canary shot in Newcastle’s West End are not unusual. Up and down the country, people without savings are being left penniless while they wait for their first Universal Credit payment. They cannot buy food or pay the rent. This should not be happening in one of the richest countries in the world.