Ex-EDL leader goes on a Nazi march. Then he's made the 'goodwill' ambassador for an arts charity. [TWEETS] - Canary 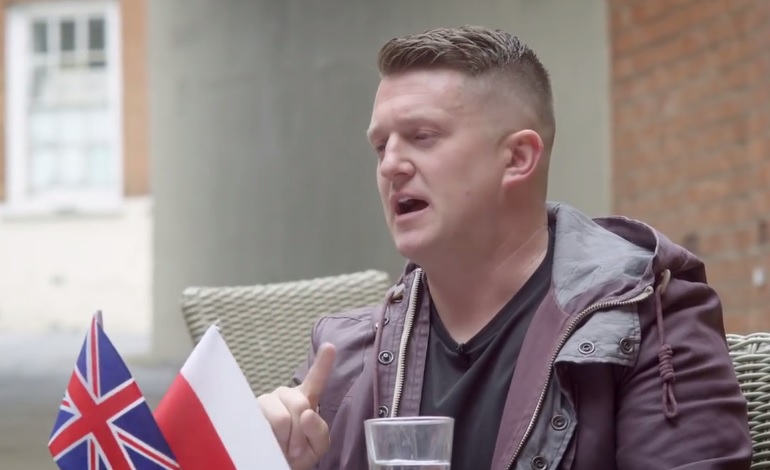 The ex-leader of the English Defence League (EDL), Tommy Robinson, attended a march recently. At that event, CNN witnessed people carrying signs that read “Pray for an Islamic Holocaust”.

When Robinson returned to the UK from the nationalist, far-right celebrations of “White Europe” in Poland, he received some good news. An arts charity announced it had selected him as its “Goodwill Ambassador”.

And social media has rightly concluded that you literally couldn’t make this shit up.

The word ‘goodwill’ doesn’t immediately spring to mind when thinking about Robinson, whose real name is Stephen Yaxley-Lennon. And the words ‘a champion of the arts’ don’t either. Because he’s famous for being a leading figure in Islamophobic hate groups. He headed up the EDL between 2009 and 2013. And he co-founded Pegida UK; a group set up to counter the “Islamisation of our countries”.

Yet the Matthew Martino Benevolent Fund (MMBF) has decided to give the role to Robinson. The MMBF was started by its namesake, Matthew Martino, in 2014. He’s a Zimbabwean immigrant. The MMBF says it provides grants, awards and support for aspiring film industry professionals.

In its announcement, the MMBF said Robinson is a “keen supporter of the world of media and the arts”. And so, as part of his ambassador role, Robinson will oversee a £100k grant scheme called the “MMBF Tommy Robinson Award”. Commentators on social media, however, had quite a different interpretation of both Robinson and the MMBF’s decision.

Many commentators didn’t believe the appointment was real at first:

This is a joke obviously… good one 👍

My iPhone does this all the time. Can't remember it correcting 'Racist' into 'Goodwill' though🤔🤔🤔

Any artist worth their salt will refuse to accept a single penny from your foundation until all ties with this violent hate preacher are severed. This is an absolutely baffling decision and I can only hope it is in fact some incredibly subtle work of satire.

But people then realised it wasn’t a joke. And they ‘charitably’ tried to show the MMBF the error of its ways:

Ah, the far-reich! Very well known for their contribution to the arts and artistic freedom.https://t.co/80GNRkvqV6

You've really dropped a bollock on this one, chaps. The guys a convicted fraudster, marches with fascists and is connected with all sorts of far right stuff. I reckon the goodwill your charity gets will be negative right about… Now.

Some commentators, however, wondered whether the MMBF’s internal politics influenced the decision:

Does MMBF stand for Making More British Fascists? Are you a real organisation or an alt-right front?

Matthew Martino, whose real name is Mathetes Chihwai, is a UKIP supporter who openly backed Islamophobe Anne-Marie Waters as leader. Waters set up Pegida UK with Robinson. Martino published an open letter supporting Waters as UKIP leader on The Daily Brit website. This is one of a number of “curious” media titles that campaign group Hope not Hate has found to be connected to Martino’s company MMBF Ltd.

So it looks like Martino and Robinson may have more in common than a ‘keen support’ of the arts.

The Canary contacted the MMBF for comment but received no reply by the time of publication.