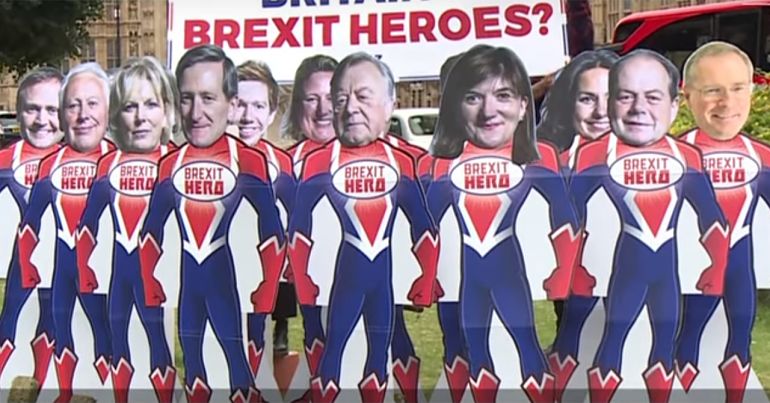 It looks like something from the rankest depths of the Leave.EU promotional brains trust. A line-up of spandex-clad ‘Brexit Heroes’ topped with the disconcertingly large faces of various right-wing MPs.

Unbelievably, it was a stunt by supposedly progressive lobbying behemoth Avaaz. These MPs, so the story went, were going to stand bravely against Theresa May’s evil schemes to bypass parliament. According to the excitable press release that plopped into The Canary’s inbox:

Of course, fifteen Tory rebels are enough to upend May’s tenuous working majority, even with several Labour MPs gleefully hoofing the ball into the crowd when faced with the simplest of open goals. So the cardboard cutouts’ human representatives inside the chamber really did hold the balance of power.

It’s not hard to see why many people would have wanted the vote on 20 June to go against the government. There’s the question of the primacy of parliament over the government. The idea that, when push comes to shove, parliament can tell the government it’s barking up the wrong tree is an important one in British politics. Not for us the type of rule by executive order going on in the US. And bound up with this is the feeling that the government is so unlikely to achieve an even vaguely acceptable deal with the EU that parliament will have to make sure it can reject it.

There are different ways of leaving a club. You can sashay out with a stylish swagger that leaves everyone else thinking you must know something they don’t. Or you can tumble out arse over tit, land flat on your face and fall asleep in the gutter. There’s nothing in the antics of May’s tawdry coterie of idiots such as Davis, Fox and Johnson to suggest anything other than option two. May’s repeated mantra that she’s “delivering on the will of the British people” only works if you interpret the Leave vote as a call to make Britain worse off and less significant on the global stage. Suggesting that British opinion was frozen in carbonite on 23 June 2016 is also wilfully fatuous to the point of demeaning the office of prime minister.

So any rebellion against May’s headlong charge is really no more than a lemming stopping for a moment to say: “Are you sure this is a good idea lads?” But for a rebellion to work, you need rebels. That’s right, rebels. Not ‘rebels’. Wat Tyler was a rebel and it cost him his head. Robert Kett was a rebel and he ended up dangling from Norwich Castle for months. The Fen Tigers were rebels who ultimately saw their efforts to preserve their world crushed. John Lilburne was a rebel and he was in and out of jail most of his adult life. Being a rebel is costly. It has consequences. It doesn’t always get you what you want. But people remember you, and your actions resonate through the ages.

Nicky Morgan is no rebel. She failed to live up to her billing, voting with the government because she didn’t want May to be “destabilised or undermined”. Maybe she’s hoping to worm her way back into the cabinet. Can’t have principles if they might inconvenience a prospective boss.

In the end only Clarke, Soubry, Wollaston, Allen, and Sandbach stuck to their guns. Phillip Lee also voted against May. Avaaz had missed him out of the superhero lineup. Maybe the cutouts had to be ordered before Lee’s elevation to hero status the previous week. With utter predictability, ten of the Avaaz heroes proved to have no more substance than their cardboard avatars. Why did Avaaz think they would? Why are some people, for whom staying in the EU is quite reasonably important, hitching their hopes to Tory MPs? Especially when their track record is one of over-promising and under-delivering? Perhaps when some Conservatives start resigning the whip and working to bring down this chaotic and incompetent government we can give them some credit. Not before.