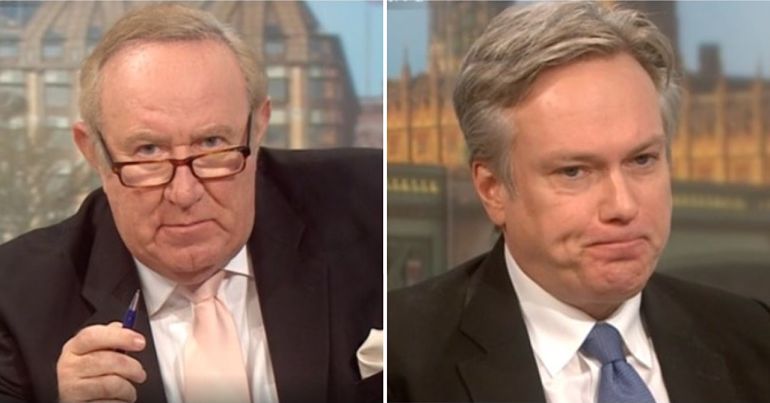 Tensions are running high over alleged Labour antisemitism this week. But in a rare media moment, journalist Andrew Neil confronted the Conservatives about a slightly forgotten scandal in UK politics: Tory Islamophobia.

And although Neil’s questioning is welcome, it accidentally revealed a lot about the media’s bias and its unequal approach to racism.

isn’t it also rather sad that a once great – other British party, I think called ‘the Conservatives’ – also has its elements of Islamophobia in it?

Smith responded by saying something that would be unthinkable for a Labour MP to say about antisemitism. He denied there was any problem at all that he was aware of:

“I have never come across any of that in the Conservative Party” MP @HenrySmithUK tells @afneil about claims of islamophobia in his party#politicslive https://t.co/A8fzeU0Sf4 pic.twitter.com/Kq6cZsqXhP

This was later rebuffed by a former Conservative minister and Muslim, Baroness Sayeeda Warsi. Warsi has previously called for an inquiry into Conservative Party Islamophobia. She tweeted:

I have a lot of time for @HenrySmithUK – whom I have campaigned with but on this he is simply wrong.
Dozens of cases now been seen by the Party- dealing with one again today.
Sad that colleagues continue to refuse to confront this issue #islamophobia https://t.co/oE8jgPHpnL

Guardian journalist Dawn Foster had already confronted the Tory hypocrisy on this issue:

Criticism of the speed with which Chris Williamson was suspended rings hollow when the Conservatives are entirely ignoring Sayeeda Warsi’s calls for an inquiry into systemic Tory Islamophobia, and Boris Johnson facing no repurcussions for his “letterbox” burqa comments.

However, aside from the Tory MP’s predictable denial, more revealing were Neil’s own comments. Neil said to Smith:

and because of the row over antisemitism you’ve got away with this.

Neil’s comments accidentally shed light on the hypocrisy of the media and its failure to adopt a balanced approach to the two issues. People rightly question why the media obsesses over Labour antisemitism, yet ignores Tory Islamophobia. Why is one a two-year long scandal and the other a forgotten footnote?

The media’s focus on antisemitism isn’t inevitable, it’s a choice. And so Neil should more accurately have said to Smith of Islamophobia: ‘because we the media have no interest in holding the Conservative Party to the same standards over racism as Labour, we have let you get away with it’.

"and because of the row over antisemitism, you've got away with this"

THAT'S BECAUSE THE MEDIA CHOOSE TO FOCUS ON ONE ISSUE AND NOT THE OTHER!

More accurately YOU LET THEM GET AWAY WITH IT! https://t.co/TFi6hUA0Ga

The Conservatives’ record on racism speaks for itself after Windrush. And although they ignore their problems with racism, it is unforgivable for the media to. The media whose job, after all, is to hold to account the party of government. Especially when the media seems to have no such problem providing incredible levels of scrutiny to the Labour Party on issues of racism.

For example, as the furore grew around Chris Williamson, Laura Kuenssberg of the BBC was quick to tweet:

I asked Kuenssberg the following:

Dear @bbclaurak (Laura Kuennsberg)@SayeedaWarsi has been talking about Islamaphobia in the Conservative Party for nearly a year. I haven't heard you mention this once. May I ask why one issue is news and the other not? I'm trying to understand news values https://t.co/x94GQZpH2x

And the evidence of my contention that “I haven’t heard you mention this once” seems well founded. As Evolve Politics tweeted, regarding Kuennsberg’s record:

> 0 of her tweets have been about Islamophobia

And also regarding Iain Watson of the BBC, Evolve Politics documents that:

And as journalist Omar Baggili commented of Smith’s denial of racism on Politics Live:

Cue the outrage from the media at the denial of Islamophobia within the Conservative Party from a Tory MP.

Sorry I mean cue the tumbleweed. Thank you @afneil for raising this issue.

Beyond the BBC, journalist Basit Mahmood, writing for Media Diversified, makes the wider point that:

Given that so much of our tabloid press produces sensationalist and misleading stories about Muslims, whether it be the Times’ false Muslim foster families story or the Sun’s claim that 1 in 5 British Muslims support ISIS, not to mention the daily articles that suggest the entire community is “a threat within”, “forcing schoolchildren to eat halal meat”, or trying to “ban Christmas”, is it little wonder that many fail to hold power to account when it comes to Islamophobia?

Why doesn’t the media portray Islamophobia in the Conservative Party as a scandal? | AN ALTERNATIVE LENShttps://t.co/Bv64aWjtAV

Media bias is letting the Tories get away with racism

Compared with some of the poor records above, Neil’s raising of the issue is welcome. But he has accidentally highlighted the terrible imbalance in wider reporting of these issues.

This is destructive for antiracism. Because currently Labour supporters only see the media dealing with racism energetically in a one-sided manner. And as this is so destructive to their party, while the Conservatives walk scot-free, some conclude it’s a media smear. The tragedy of this is that real victims of racism may then be ignored by sceptics.

If the media genuinely wants people to take racism seriously the answer is simple: deal with it fairly. It isn’t ‘whataboutery’ to ask it to do so.