People are rising up against Ireland’s failed housing policies - Canary 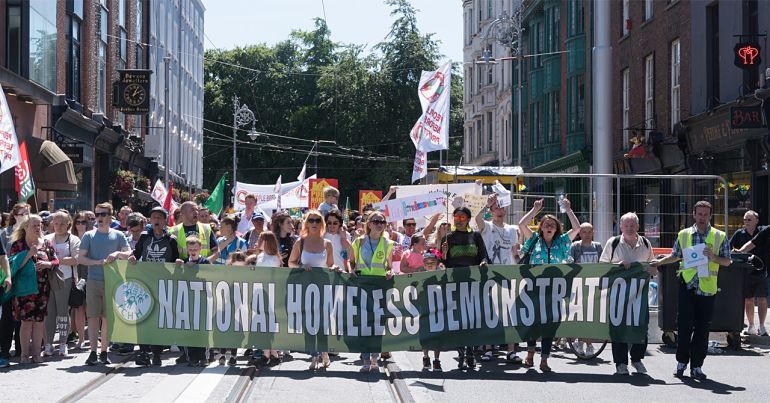 An Irish housing group is calling for people to take to the streets of Dublin on 9 March. The National Homeless and Housing Coalition (NHHC) is organising a march to highlight the housing and homelessness crisis. It announced on Twitter that it will be marching to demand the government takes “meaningful action”.

The group’s call comes as the government released the latest homelessness figures for this year. A record 9,987 people were homeless in January according to the Department of Housing. Paul Sheehan of the Simon Communities said the government needs to do something. With rents in Ireland at an all time high, he said:

Without an accessible private rental sector or affordable housing, people have nowhere to go if they cannot afford to rent; this isn’t fair.

And, he insisted the government must “build and invest in social and affordable housing”.

The government is at fault

On Twitter, NHHC claimed that the 9,987 figure was not accurate. It instead believes the figure is far higher:

#Homeless figures released by Dept for Jan show 9,987 people as officially homeless. This is a drop in the ocean compared to the true number of people impacted by #homelessness.#HousingCrisis impacts everyone from students, Travellers, workers, families, migrants & children.

It also accused the government of failing to take action against greedy landlords:

Between Q3 2011 & Q3 2018 average rent in Dublin increased by €606 ( 60%) per month to €1620 (@RTBinfo). Continued over-reliance on private rental market by Gov has allowed landlords to maximise profits using loopholes to evict tenants then relisting at much higher rent.

We need to show the government that we will no longer accept their lack of will to build public housing on public lands and their continued over reliance on the private sector to address the homeless and housing emergency.

The European Commission has also recently criticised Ireland’s housing policies. A lack of new homes being built, unaffordable rents, and rising prices are “driving increased rates of homelessness in Dublin and elsewhere”, it said. Rents have increased by 23% since 2015. The Commission said this is “the highest in the EU”.

NHHC also called for more radical solutions to the housing and homelessness crisis. It said housing mustn’t be seen as a commodity:

Yes @RentalProperty8 very important argument – we need #rentdrop and more. We need people to make alliances, fight against 'housing market' ideology and recognise that housing cannot be a bought and sold as a commodity if we are going to solve global #housingcrisis #homesforall

Unless this Gov starts a #publichousing plan to build public housing on the zoned land owned by local authorities and #NAMA, our #homelessness figures will continue to rise. This includes using UNSPENT allocated #TravellerHousing budgets! #March9th #HomesforAll #Right2Housing pic.twitter.com/G2EILTmoUp

As The Canary previously reported, roughly 10,000 people joined a housing protest in Dublin in December. And similar demonstrations were also held earlier in 2018. The rally on 9 March is part of a build-up towards a larger national demonstration that will happen on 11 May in Dublin.