Conforming to establishment media groupthink could destroy Corbyn - The Canary 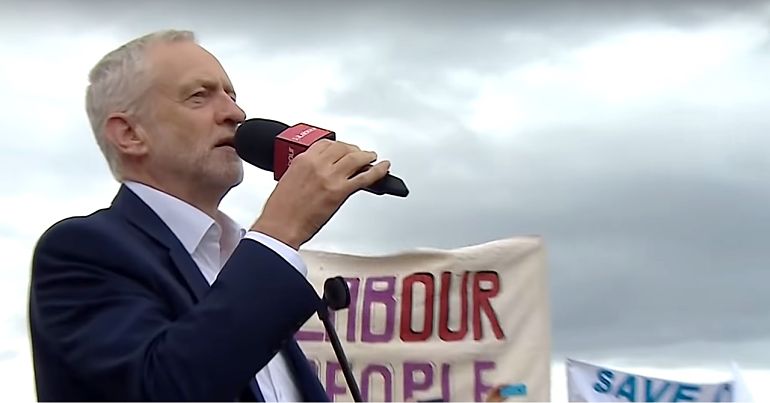 The establishment media in the UK constantly proclaims various ‘truths’ that all serious people are supposed to accept. Many of these claims are sold in any ‘capitalist democracy’. It tells us which governments are ‘dictatorships’ that must ‘pressured’ or overthrown. It tells us a government’s finances are like a household’s. In recent years, the UK media has also been telling the public  that the Labour party under Jeremy Corbyn is antisemitic.

During the general election campaign of 2017, Corbyn mobilised his base to demolish the media’s claim that he was leading the party to electoral annihilation.

In spite of that success, Corbyn’s Labour party has a problem with cowering before the establishment media consensus. It could be destroyed by it. If it ever forms a government, it could be weighed down by so many concessions to the elite that it badly disillusions the hundreds of thousands who were inspired to join the party.

The most obvious manifestation of this problem has been its response to the antisemitism smear campaign that has been waged against the party. But this instinct to appease the media is also apparent in its economic policy agenda, and on its statements about Venezuela. The membership must fight back against this tendency in Corbyn’s leadership. It must pressure Corbyn from the left, because the pressures from the right will not stop.

British newspapers have run headlines saying that Corbyn poses an “existential threat to Jewish life” in Britain. If that doesn’t give away an incredibly cynical smear campaign, then what does?

The staunchly pro-Corbyn MP, Chris Williamson, dared to state an obvious truth: the party has been “too apologetic” in response to being “demonised as a racist, bigoted party”. He clearly meant the smears, and did not deny that the “scourge of antisemitism” (which he referred to in the same address) exists to some extent in the Labour party. Indeed, numerous problems exist in Labour. A party that still hasn’t expelled Tony Blair has huge moral failures to address. It does not take hundreds of thousands of needless Iraqi deaths seriously enough, never mind its own rules. And why wasn’t Ian Austin immediately expelled when he viciously heckled Corbyn in parliament as Corbyn attempted to wipe a tiny bit of Iraqi blood from Labour’s hands?

Williamson was suspended despite apologising for not making his remarks even more abundantly clear. By suspending him, the party added an exclamation point to the valid statement Williamson made.

His suspension will now be used as additional ammunition to depict both Williamson and the membership as antisemitic. It will encourage persistent Corbyn-bashers to push for more unjust suspensions and expulsions. Tom Watson, Labour’s deputy leader who has been undermining Corbyn for years, was clearly emboldened to attempt an audacious power grab.

Jewish Voice for Labour quickly issued a strong statement defending Williamson, but one feature of the smear campaign has been to make the ‘wrong kind’ of British Jews easier to ignore, vilify, and even threaten. The implications for Palestinians on the wrong side of Israeli guns are vastly worse.

‘Israel is a racist endeavour’

Corbyn’s right hand man, John McDonnell gave an ‘excruciating interview‘ last year in which he denounced posters in London that said “Israel is a racist endeavour”. This came after the party accepted a deeply flawed set of examples of antisemitism, which, predictably, has done nothing to stop the party from being smeared as antisemitic.  It did, however, lead McDonnell to rebuke activists engaged in non–violent resistance to the UK-backed slaughter and savage economic strangulation of Palestinians. It was a perfect illustration of the point Williamson made. In fact, McDonnell’s behaviour in this interview shows that Williamson could have been harsher. Williamson might have added that the party has been so intimidated by the antisemitism smear campaign that it has marched backwards on antiracism in some ways.

Palestinians have always paid a heavy price for the moral cowardice of westerners.

they don’t have confidence in their own ability to provide leadership in the debate, so they default to using the language and framing of neoliberals.

Lacking this confidence, Labour put out a ‘fiscal rule document‘ that says

While there are exceptional times when shocks from the private sector mean that government has to step in to help, everybody knows that if you’re putting the rent on the credit card month after month, things needs to change.

That’s nonsense. The finances of a government that can issue its own currency are absolutely not constrained in the same way a household’s are. The analogy is a neoliberal scam, as Mitchell explained. This matters tremendously, because a Labour government that seriously confronts inequality will encounter fierce resistance. It will need to make full use of all the policy tools it has like running deficits when required to fight unemployment and make urgently needed public investment.

McDonnell has written that “deficit denial is a non-starter for anyone to have any economic credibility with the electorate”. In other words, he’d rather not struggle to debunk a key neoliberal dogma the media relentlessly sells to the public.

A closely related dogma McDonnell refuses to challenge is the supposed virtue of “central bank independence”. Why should the Bank of England be allowed to defy the elected government on economic policy any more than the military should be allowed to defy the government on foreign policy? There is no valid analogy to the judiciary which should be independent of the government of the day. Central Bank independence is simply an elitist idea that McDonnell considers it unwise to challenge.

According to the BBC, the only kind of “pressure” Emily Thornberry explicitly rejects being applied on Venezuela’s government is “invasion”. Does Corbyn’s shadow foreign secretary support barbaric US sanctions on Venezuela that have been in place since 2017?  This is how Labour responds when the likes of Donald Trump, John Bolton, and Elliott Abrams openly try to overthrow a democratically elected president? Why does Thornberry discuss “pressure” on Venezuela at all and not on the United States? US sanctions on Venezuela are a massive human rights abuse. What “pressure” should be applied to end them? What “pressure” should Labour bring to bear on the Bank of England? The bank has been illegally withholding gold deposits from Venezuela’s government.

Chris Williamson was courageous enough to raise those concerns.

Don’t give up. Take action.

No doubt Corbyn is saddled by many hostile MPs like Tom Watson who will happily leverage the media consensus against Corbyn. But that points to the need for counter pressures, not silence. As Ben Chacko put it in the Morning Star:

“If those of us who disagree decide to hold our tongues, the leadership in practice is being pressed in one direction only and it is hardly surprising if its radicalism is being systematically blunted in the process.”

Ali Abunimah, the editor of electronIntifada.net has given up hope. He said that the “tragedy” of Jeremy Corbyn:

“that will be studied for decades is that he led a mass movement that could have won power and brought real change without surrender or appeasement to the unappeasable right, but whose leaders chose not to fight. Much was at stake and not just for UK.”

Perhaps, but it’s too early to write Corbyn’s leadership off as a cautionary tale. It’s better to give up a worthwhile struggle too late than too soon. Corbyn is still the same person with an exemplary anti-war, anti-austerity, and pro-Palestinian rights record that goes back decades. Ordinary Labour members – not pundits like Owen Jones – saved Corbyn’s leadership before. They need to try to save it again – from itself. Here is a worthwhile plan of action.