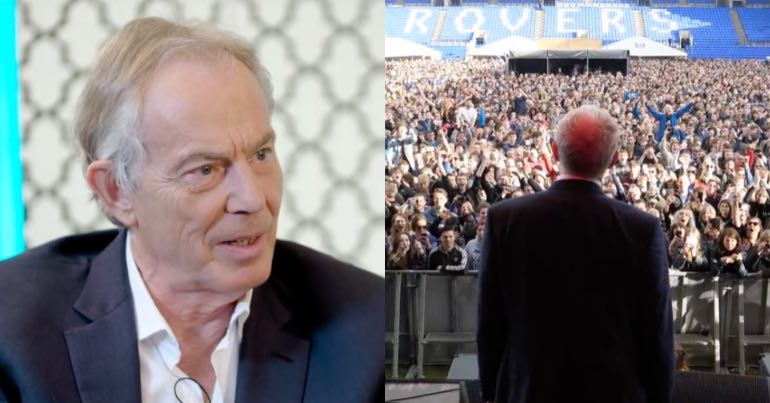 During an interview with James O’Brien on 6 March, Tony Blair claimed that antisemitism in the Labour Party is because of new party members.

In doing so, Blair confirmed the long-held view of critics of Labour’s so-called antisemitism ‘crisis’ – that antisemitism serves as a vehicle through which Labour right-wingers can discredit the largely left-wing membership.

This isn’t to say that antisemitism doesn’t exist on the left and in the Labour Party. Genuine cases need calling out and need tackling. But Blair’s suggestion that antisemitism is a problem originating from a new Corbyn friendly membership flies in the face of the available facts. Not to mention his own record that disqualifies him from taking any moral high ground.

If you can’t beat them, smear them

Critics have long believed that some of the antisemitism accusations are, in part, motivated by a desire to undermine Jeremy Corbyn. And this has been seized upon by party critics as yet more evidence of a personality cult surrounding Corbyn.

But this is as simplistic as it is patronising.

Corbyn supporting Labour members are politically clever enough to understand that attacks on him are also attacks on them and their politics.

Take, for example, Corbyn being accused of presiding over a sudden emergence of institutional antisemitism in the party. Although aimed at him individually, there is another subtle and pernicious implication to this accusation – the public is led to believe that if antisemitism is unique to Corbyn, and Corbyn was elected by Labour’s new members, then they must be the cause of this antisemitism.

And so the effect is to inflict collective punishment against Labour’s hundred of thousands of new members and taint them as racist in one fell swoop. This is a more subtle type of smear than when the likes of Chuka Umunna or Tom Watson directly referred to members as “dogs” or a “rabble”.

This point was clear in O’Brien’s interview with Blair:

But there was nothing ‘subtle’ about what Blair said. When asked why he thought antisemitism in Labour had happened, Blair responded:

There is a whole series of people with a set of very far-left attitudes, some of which are around the foreign policy questions, particularly around Israel, and they’ve come into the Labour Party.

And the truth is now because the leadership is from that tradition, the door is open with a welcome mat.

Note how he stressed that “they’ve come into the Labour Party”. As though antisemitism in Labour never existed before new members joined.

Is antisemitism unique to Corbyn and his members? Evidence says otherwise

there exists no reliable, empirical evidence to support the notion that there is a higher prevalence of antisemitic attitudes within the Labour Party than any other political party.

Addendum [2]: A YouGov poll conducted in 2017 concluded that antisemitism is more prevalent with the @Conservatives Party and that antisemitism had fallen markedly within Labour under @jeremycorbyn's tenure. pic.twitter.com/wfe8FyW1v9

And as prominent Jewish academic Norman Finkelstein stated,  “I don’t see the evidence”:

Excellent.
Too long to include all of it but i've clipped a couple of minutes here
It's a shame our mainstream media don't have @normfinkelstein more often
re Yougov / Pew actual polling data on Antisemitism pic.twitter.com/gBvIaptrLK

Although according to Channel 4 News Fact Check, the YouGov report also showed that the majority of British Jewish people perceive that Labour is tolerant of antisemitism. But without wishing to be accused of gaslighting, it must be stressed that perception is not the same as reality. And intense media coverage that the Media Reform Coalition found ‘misleading’, ‘distorted’ and ‘inaccurate’ can distort perceptions.

Nor does this evidence mean denying that antisemitism exists in the Labour Party. Clearly it does. But according to the available data at least, to treat it as a new and unique ‘crisis’ is baseless. Especially considering the small number of confirmed instances.

You therefore do have to wonder what the hell Blair is talking about?

What about his own record on racism?

Blair also boasted that when he was leader there was no place for antisemitic attitudes in the party. He said:

when I was leader…the door was locked and barred to those elements with a kind of ‘not welcome’ sign on the door.

And yet Blair has conveniently forgotten the history of his own leadership. Labour was criticised for using antisemitic imagery depicting a former Jewish Conservative Party leader as a flying pig and as Fagin from Oliver Twist:

Is this the same Tony Blair who was leader of the Labour party when they had to withdraw their anti-Tory election poster because of its anti-semitism? pic.twitter.com/s86hrvcWYM

Even Luciana Berger – who recently resigned from Labour citing abuse and antisemitism under Corbyn – was critical of the Blair government, describing it as “misguided” and “wrong” back in 2005.

She also said that:

I think the insensitivity surrounding all parties’ approach to asylum and immigration has a lot to say for the rise in not only anti-Semitism but any form of racism directed at immigrants. All parties have been responsible for not dealing with the issue in an appropriate manner.

But according to the Jerusalem Post, Blair was happy to tell Sophie Ridge on Sky News:

And the editor of Tribune Magazine also pointed out that some of Blair’s employers happen to be peddlers of antisemitism:

Tony Blair took millions in consultancy fees from a Saudi regime which distributed the Protocols of the Elders of Zion to schools alongside textbooks saying Jews were descended from pigs and responsible for the spread of disease. We are through the looking glass now. https://t.co/4DTW7XUguM

Although even Blair must be able to ‘imagine’ Islamophobia when he was Prime Minister. His holy crusades abroad into majority Muslim countries created a truly hostile environment at home for British Muslim communities who were subsequently demonised, surveilled, and worse.

So yes Tony, perhaps taking a high ground on racism isn’t for you.

For Blair, it’s about Israel

And as though the above isn’t enough, in the interview Blair also indulged in the ‘criticising Israel is antisemitic’ fallacy.

In fact, according to the Guardian, when defending himself back in 2005 during the antisemitic imagery scandal, he said:

We have been staunch supporters of Israel, staunch defenders of the Jewish community, and aggressively against any form of racism.

This historic answer reveals that he has long believed that because he’s a defender of Israel, he couldn’t be antisemitic – another fallacy this piece in the Guardian makes clear. Blair repeated this belief when he said to O’Brien:

it’s a problem [antisemitism] when it drives from a worldview, in which…this criticism of Israel is so excessive, that it, kind of impacts the whole of your thinking

The suggestion that criticism of the Israeli state is antisemitic is a propaganda tactic used to silence critics. It is yet another reason not to listen to Blair on antisemitism. And as argued by sociology lecturer Sami Ramadani, such an unfair conflation actually undermines the fight against antisemitism:

Tony Blair explains that it’s strong criticism of the apartheid state of Israel which he equates with antiSemitism, in order to beat the left with. His & his ilk’s campaign is actually doing great damage to the cause fighting against antiSemitism & all other forms of racism. https://t.co/5Co9nREqC2

But Blair’s attitude on the subject is unsurprising. He was condemned during his role as Middle East peace envoy for not making:

sufficient attempts to get the Palestinians on board. Where he has stepped outside the mandate, it has been one-sided, in praise of Israel.

In short, he was biased. And he showed that same bias and “almost unqualified support for Israel” to quote one critic, throughout his time as prime minister.

Time to shut up, Tony!

Given this history, why should a man so wrong and so horribly compromised on every level take the moral high ground on antisemitism? And why do the media give him opportunities to spout such nonsense with so little challenge?

And as for Labour’s newer members, I say this to you: don’t take this shit lying down! Don’t allow a has-been war criminal to lecture and slander you on anything to do with racism. Or, anything else for that matter.