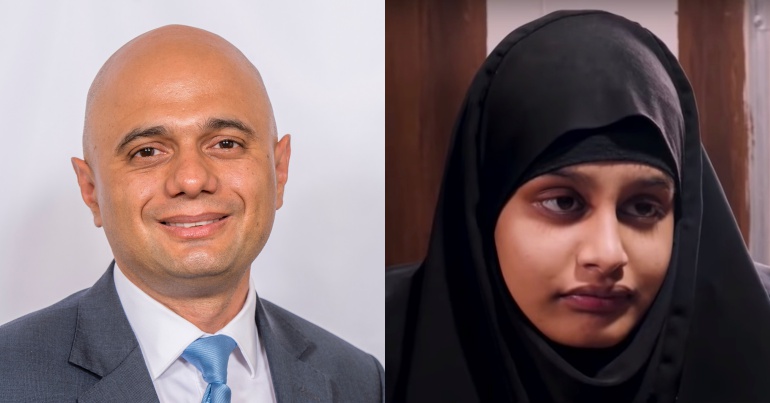 Home secretary Sajid Javid is facing widespread criticism after reports emerged that Shamima Begum’s three-week-old baby died in a refugee camp in Syria. Javid stripped Begum of UK citizenship and refused to allow her to return to the UK. Shadow home secretary Diane Abbott called this “tragic death” a “stain on the conscience of this government”.

In 2015, Begum left the UK and travelled to Syria with two friends. She was only 15 at the time. Groomed by Daesh (ISIS/ISIL), the girls married Syrian fighters.

In February, Begum tried to return to the UK with her newborn son, Jarrah. Javid refused and demanded that she should be stripped of UK citizenship. In other words, Javid effectively made Bergum stateless.

Abbott has led the criticism against this decision:

It is against international law to make someone stateless, and now an innocent child has died as a result of a British woman being stripped of her citizenship. This is callous and inhumane https://t.co/Lv35Q4vvrA

In a statement, Abbott also said:

The tragic death of Shamima Begum’s baby, Jarrah, is a stain on the conscience of this government.

It is against international law to make someone stateless. And to leave a vulnerable young woman and an innocent child in a refugee camp, where we know infant mortality to be high, is morally reprehensible.

What does it say about our government on International Women’s Day that it would allow hundreds of men to return to the UK from Syria and Iraq under similar circumstances, but strip citizenship from a young woman who was groomed as a minor. It is clear that society is not past blaming groomed young women for their fate.

Begum was groomed when she was only 15-years-old:

I don't care how unpopular this will make me. Shamina Begum was groomed as a 15 yr old, and after, effectively, being a sex-slave, has now lost her third child. And our govt.'s response is to persecute her instead of seeking to rehabilitate her. Hard to find words.

It is absolutely appalling that this young woman was left with her baby, alone and without medical assistance. It’s beyond ridiculous that her citizenship was revoked in the first place and now an innocent baby has died. SHE. WAS. GROOMED. @sajidjavid should resign. #Begum

His only sin was that he was born to Shamima begum who was groomed when she was only 15 then. The government is equally responsible for not handling the situation at all. She should have been brought back along with the child on humanitarian basis. https://t.co/m5ApQNStDp

The Shamima Begum case is devastating. To cancel the citizenship of a young person who was groomed by extremists, and then allow her baby to die demonstrates the total lack of compassion and moral compass of the UK government. I am disgusted.

trying to better his chances of becoming prime minister by illegally stripping her of her passport, rather than maturely focusing on the needs of a helpless infant who might have been rescued. Indeed, it is just this kind of ill-considered populism that is further alienating many Muslims when we should be proving that we really do believe in human rights for all.

Shamima Begum's baby son – a British citizen – has died. He would surely still be alive had Sajid Javid fulfilled Britain's obligations under international law instead of populist grandstanding. Appalling.

As a Muslim journalist and editor said:

And he was not alone;

.@sajidjavid, you have the blood of a three-week-old British Citizen on your hands.

You could have rescued Jarrah & partially saved face but, instead you did nothing apart from play to the crowd of baying racists.

Your intentional inaction cost the live of an innocent child.

On 8 March, the International Rescue Committee (IRC) said the situation in the Al Hol refugee camp (where Begum initially fled) was at “breaking point”. So she, and her baby, were in “one of the most vulnerable situations imaginable”:

Shamima Begum is a formerly groomed teenager and her child was a British citizen in a refugee camp. He was in one of the most vulnerable situations imaginable and his government left him to his fate. Try telling me they would have done the same if he was white

As the IRC reported, over 12,000 women and children arrived at the camp from ISIS-controlled Baghuz in Eastern Syria since Wednesday “bringing the total population… to over 65,000” people. It also noted:

I get the debate over the UK government’s responsibility for Shamima Begum’s baby. But in the camps and hospitals of Rojava, northern Syria, the issue is preventing more such deaths. The Kurdish authorities need more help to deal with all these families leaving the ISIS enclave.

There are still “hundreds of children born to foreign nationals” in Syrian refugee camps. Meanwhile, the UK’s track record in supporting refugees from the Syrian conflict – especially children – is appalling. But it’s now made that worse, and an innocent baby is dead.

Featured images via Ministry of Housing, Communities and Local Govt/Flickr and screengrab