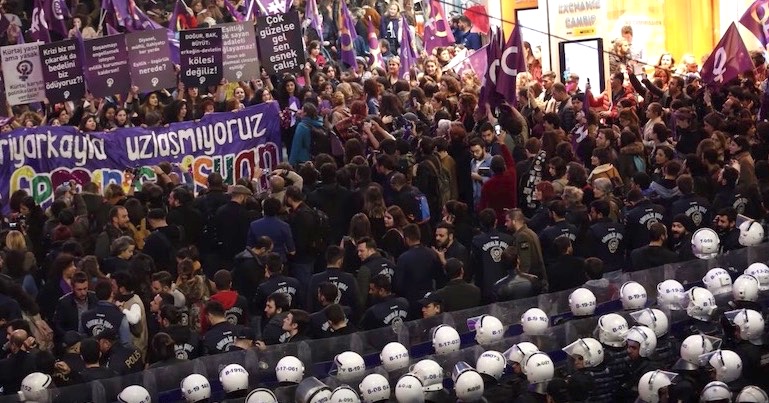 On March 8, women around the world celebrated International Women’s Day. But in Turkey, police opened fire on thousands of women marching peacefully in the centre of Istanbul. Police fired rubber bullets and used tear gas and pepper spray to disperse crowds.

disperse crowds in the latest sign of President Tayyip Erdoğan administration’s growing intolerance to any form of dissent or expression of civil rights.

Ahead of the march, riot police put Istanbul’s centre on lockdown. As thousands marched peacefully towards Taksim Square, “holding placards and shouting ‘We refuse obedience'”, police blocked their entry. Many of the women were there to demand “equal rights and an end to the rising political suppression in the county”.

In the violent scenes that followed, those marching ran from rubber bullets and tear gas. An anonymous attendee told Kurdistan 24 that police “attacked us with tear gas for no reason”.

The pro-Kurdish Peoples’ Democratic Party (HDP), issued a statement to condemn the violence:

Everywhere in the world, women celebrated March 8 freely. But there was only one place where a police assault took place. Guess where? We are baffled by the government’s logic that it thinks it can frighten women this way.

Meanwhile, other films showed the size of the demonstration and the panic caused by police action:

The human rights situation in Turkey is critical as Erdoğan continues to attack peace and democracy. His regime has shut down 180 media outlets and “independent journalism has been all but obliterated”.

excessive use of force; killings; enforced disappearances; torture; destruction of housing and cultural heritage; incitement to hatred; prevention of access to emergency medical care, food, water and livelihoods; violence against women; and severe curtailment of the right to freedom of opinion and expression as well as political participation.

Marking International Women’s Day in Turkey is vital. According to the NGO Umut (Hope) Foundation, in 2018, “477 women were killed and another 232 were injured at the hands of violent men”. Yet, Turkey made over $5m in profit exporting flowers to other countries to honour the day.

Erdoğan has also led a vicious campaign against the Kurdish population in both Turkey and Syria. As The Canary‘s Emily Apple reported, there are currently 15,000 political prisoners in Turkey. And Kurdish lawyers told The Canary that from 1 March, 5,500 prisoners are on hunger strike.

This International Women’s Day came as Leyla Güven – a Kurdish MP for the HDP – marked 121 days of an indefinite hunger strike. The strike calls for an end of the isolation of imprisoned Kurdish leader Abdullah Öcalan. This includes ending his solitary confinement and allowing him access to lawyers and family visits.

Whether it’s writing to your MP, telling people about the hunger strike, boycotting Turkish products, or shutting down an arms company that is making money from selling Turkey weapons, there is something each and every one of us can do to highlight the violence of  Erdoğan’s government.