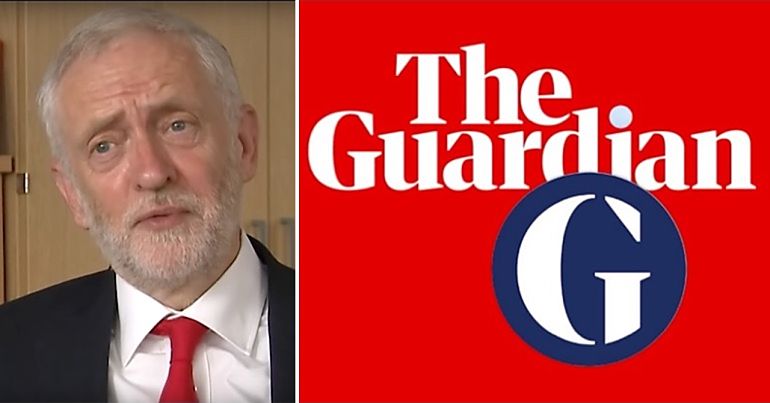 The Guardian never wastes an opportunity to stick its boot into Corbyn’s Labour.

But its latest headline comparing Labour’s Brexit performance to the blood-soaked ‘stain’ of the Iraq war is just trolling. It lets the Tories off the hook for Brexit and it also ignores the Guardian‘s own role in supporting that war.

Brexit and the Iraq war are two stains on the Labour party https://t.co/s0OeZGhql9

A convenient choice of letter

Defenders of the Guardian were quick to point out that the headline concerned a reader’s letter, not the paper’s own views:

this is a letter. From a reader who thinks that. You want not just the paper but all its readers to agree with you?

But the Guardian’s editors have the power to choose which letters they publish and give prominence to.

For example, as The Canary reported on 16 March, the Guardian refused to publish a letter, signed by 200 Jewish women, which criticised its coverage of Labour’s antisemitism controversy.

The letter itself is a disaster-class in lazy false equivalence and poor reasoning. It argues:

The fact that a Labour government took us into the Iraq war will for ever be a stain on the history of the party. When it comes to Brexit, the failure of the current leadership to realise that it should be at the forefront of the campaign for an open and inclusive Britain is equally distressing. Will they never learn?

Firstly, the Iraq war was an illegal murderous bloodbath. It led, according to higher estimates, to the deaths of over a million people. Countless others were wounded and maimed for life. Children are born with birth defects allegedly caused by exposure to depleted uranium weapons. The war displaced millions more people from the country and provoked mass social breakdown. It also inflamed terrorism throughout Iraq and the middle-east. And there were predictions that it would increase the threat of terrorism in the UK, a now widely recognised reality.

But when I last checked, Labour’s evolving position on Brexit hadn’t resulted in mass death, war crimes and violations of international law. Or have I missed something?

The comparison is all the more outrageous when you consider that among the current leadership of the Labour Party are some of the fiercest critics of the war. They voted against it. They protested against it. So to demean Corbyn, McDonnell et al now, by comparing their policy on Brexit with a grotesque war which they actively opposed, is frankly ridiculous.

Brexit is exclusively a Tory disaster, not Labour’s

Secondly, Brexit has nothing to do with the leadership of today’s Labour Party.

An obvious point that is constantly forgotten is that Labour isn’t actually in power. It doesn’t have a majority to control the Brexit agenda or its negotiations. And so it’s not responsible for their calamitous unfolding.

It’s also obvious that the Brexit referendum was called by the then-Conservative prime minister, David Cameron. And it’s equally obvious that he did this to please his own party. President of the EU Council Donald Tusk claimed Cameron admitted this to him. This is also the opinion of former Conservative chair Sayeeda Warsi. And Rachel Sylvester of the Times claims to have seen civil service documents showing Theresa May’s continued concern regarding Brexit’s impact on the Conservative Party, not the country.

What about the Guardian’s own support for Iraq?

It’s easy with hindsight to criticise media coverage of past events. But as the Guardian thinks it’s appropriate to promote those making dubious historical comparisons, surely it’s only fair to discuss its own role in supporting the Iraq war.

We find ourselves supporting the current commitment to a possible use of force… It is because we believe that, if Saddam does not yield, military action may eventually be the least awful necessity for Iraq, for the Middle East and for the world.

After the devastation that unfolded in Iraq, this proved to be one of the worst takes in media history.

At the time [shortly before the invasion of Iraq] …a Guardian leader described Blair’s March 18 performance as ‘an impassioned and impressive speech by the prime minister which may give future generations some inkling of how, when so many of his own party opposed his policy so vehemently, Tony Blair nevertheless managed to retain their respect and support…

‘Mr Blair spoke powerfully. He was serious in tone, respectful to backbenchers, and at times he reached levels of oratory that he rarely achieves in the Commons. He seemed to sense that, though the argument has not been won, it is swinging his way.

This wasn’t journalism. It read like the devoted love letters of a fanboy. As Media Lens concluded:

When it mattered, the Guardian took Blair seriously, respectfully, offering not a word of criticism of anything he had actually said.

The Guardian also published articles before the war in 2003 such as this one titled: This drive to war is one of the mysteries of our time, with the sub-heading: “We know Saddam is hiding weapons. That isn’t the argument.”

And even after the Iraq disaster unfolded, the Guardian still felt Blair should be rewarded with re-election, stating in 2005 that:

We believe that Mr Blair should be re-elected to lead Labour into a third term this week.

Media bias is about choices

Labour didn’t start Brexit, or negotiate it. It’s an exclusively Tory black hole, selfishly sucking us all in. To blame Labour for it is absurd. And even to attempt to equate a bloodless Brexit to the slaughter in Iraq is an insult to its many victims and the current Labour leadership who opposed it.

Media bias isn’t about crude censorship of certain opinions. It’s about choosing to give prominence to certain opinions over others. And by publishing this letter the Guardian has made its bias clear yet again.