The police are trying to trick children going to climate strikes. This has to stop. - Canary 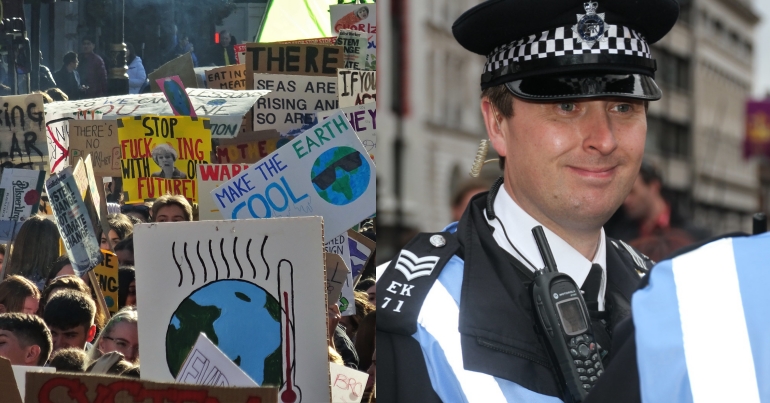 On 20 September, thousands of children across the UK are expected to join the global climate strike. The website for the global action states:

Our house is on fire. The climate crisis is an emergency but we’re not acting like it. People everywhere are at risk if we let oil, coal and gas companies continue to pour more fuel on the fire.

The climate crisis won’t wait, so neither will we.

But while children are leading the way in taking action to save our dying planet, the police are trying to trick them. And we all need to speak up, to defend our children, and to tell them the truth about policing.

A new level of bullshit

With mass protests expected, Police UK released a video on its Instagram feed. The video claims that it includes:

Everything you need to know from keeping safe, why the police are there, what the blue bibs mean and your right to protest!

But this couldn’t be further from the truth. Because the police officers referred to in the video are Police Liaison Officers (PLOs). These are the officers who wear baby-blue bibs on protests. The video describes their role:

The Police Liaison Team are there to help with communication between the police and the organisers of the march.

It claims this is to:

keep everyone on the protest safe.

But as The Canary has previously reported, this is not the role of PLOs. To put it bluntly, the statement the police make in the video is total bullshit.

The real role of PLOs

PLOs are a common sight on protests. They like to pretend they’re your friend and claim they’re there to facilitate your protest. But their real purpose is to gather intelligence on protesters.

In a video for the Network for Police Monitoring (Netpol) about PLOs, Lydia Dagostino from Kellys Solicitors described their role:

They will approach activists and say that they are there to facilitate the protest… But the reality is their job and role is to gather intelligence on the protests…and feed that back to their superior officers.

After the Balcombe [anti-fracking] protests, a document surfaced that contained effectively a blueprint… it effectively said that they should be given a sterile corridor to feed information back to the command officers.

Shamik Dutta, a solicitor at Bhatt Murphy, explained what happens to the intelligence that PLOs gather:

There are… databases such as the National Domestic Extremism database which is now known as the National Special Branch Intelligence System, where the lawful activities of protesters, and journalists, and politicians have been recorded. And so any information which is gathered by the police could be recorded on those databases.

And there’s another piece of extraordinary bullshit in the video. The officer claims that:

Sometimes, though, the police might have a reason to ask for someone’s details or even search them. This might even happen to you, even if you haven’t done anything wrong.

Now, while this is true in a very loose sense – the police might ask for people’s details and they might search them even if they haven’t done anything – the way this is presented is hugely problematic.

Firstly, one of the key messages activist legal collective Green and Black Cross (GBC) emphasises is “no personal details”. As its website points out:

You do not have to give personal details under ANY stop and search power, so don’t [unless you are the driver of a car and are driving when stopped].

On protests, the police often use searches as a way of finding out who is present, both for intelligence purposes and to intimidate you.

And given the evidence from experienced protest solicitors above, it’s clear that any such information will go straight onto police databases.

Secondly, the officer fails to point out that, while there are a couple of exceptions, with general stop-and-search powers the officer must:

[have] a reasonable belief to suspect that you may be carrying something illegal or something that can be used to commit an offence and you are likely to do so.

And to emphasise the point made by GBC above, such a search does not mean you have to give your details to the police.

But while PLOs continue asserting their propaganda, new research from Netpol shows the kids aren’t fooled. 42 students involved in previous climate strikes were interviewed, and the results show that they have a clear understanding about police data gathering and police harassment. As Netpol states:

This survey shows that there are genuine concerns amongst students taking part in climate strike protests about infringements on their rights to freedom of assembly and expression that result from unwarranted attention by the police.

So if you’re one of the thousands of people going to the climate strike tomorrow, don’t be deterred by police harassment and don’t be fooled by videos such as this one.

We all have a right to protest. And it’s important to know your rights. GBC has five key messages all protesters should remember. And prior to the climate strike in March, Netpol offered the following advice:

Netpol also tweeted the following message for anyone out on the streets on 20 September:

If you are out on the streets for the #GlobalClimateStrike, the new Independant Legal Observers Network (ILON) is dispensing bustcards and monitoring police misbehaviour. Ring the emergency helpline if you have questions – 07946541511 – or email [email protected]

Knowing our rights and looking out for each other is crucial to successful and effective protest. So don’t listen to police propaganda. Don’t end up on a police database. And see you on the streets!