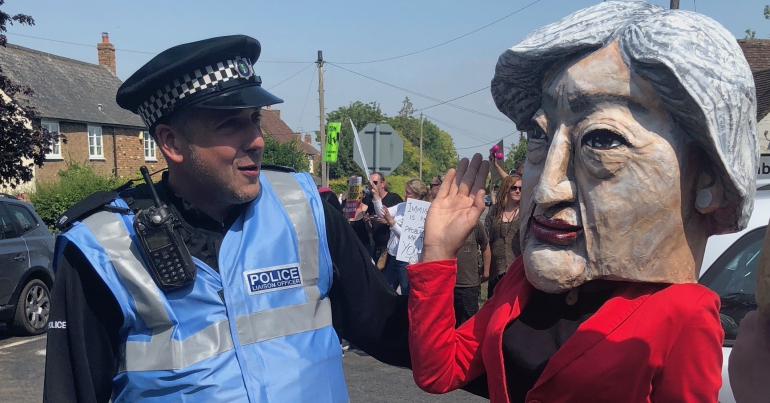 Civil liberties group, Network for Police Monitoring (Netpol) is telling us why we shouldn’t talk to the police officers in baby blue bibs at protests.

Police Liaison Officers (PLOs) are a common sight on many protests. They like to pretend they’re your friend and claim they are there to facilitate your protest. But their real purpose is to gather intelligence on protesters.

And as thousands prepare to take to the streets for climate strikes and other upcoming protests, it’s a timely reminder of why everyone should steer clear of PLOs.

In a Netpol video about PLOs, Lydia Dagostino from Kellys solicitors sets out their role:

They will approach activists and say that they are there to facilitate the protest… But the reality is their job and role is to gather intelligence on the protests…and feed that back to their superior officers.

Dagostino also warns about the way PLOs appear to be your friend at a protest:

Police Liaison Officers present as friendly, as interested, as someone you can talk to. And they speak to people and in some cases even befriend them.

The video shows a police officer denying that PLOs are intelligence gatherers. But as Dagostino says:

After the Balcombe [anti-fracking] protests, a document surfaced that contained effectively a blueprint… it effectively said that they should be given a sterile corridor to feed information back to the command officers.

So where does all this intelligence go?

Shamik Dutta, a solicitor at Bhatt Murphy, explains what happens to the intelligence that PLOs gather:

There are… databases such as the National Domestic Extremism database which is now known as the National Special Branch Intelligence System, where the lawful activities of protesters, and journalists, and politicians have been recorded. And so any information which is gathered by the police could be recorded on those databases.

Don’t talk to the police

Netpol has also produced a guide for protesters about talking to the police. Although Netpol admits that some protesters “occasionally find it useful to talk to the police beforehand”, it also makes clear that:

There is no legal obligation on any organiser of a political assembly to talk to the police before the event and it is completely legitimate for protest groups to take the decision not to do this.

And Netpol also points out that “negotiation” is not the same as “liaison”:

What organisers are expected to agree to in return, however, is a complete ‘liaison policing’ package which involves significant elements of coercive control and surveillance.

Netpol has five key points for protesters and protest organisers to remember:

You can watch Netpol’s video below and read the full guidance here. But it’s a much-needed reminder of why talking to the police is generally a bad idea, and particularly why you shouldn’t talk to the PLOs.