The Sun has redefined rock bottom with its response to the New Zealand attack. On 15 March, a far-right terrorist murdered at least 49 people and injured 20 more across two mosques in Christchurch.

Yet the Sun responded by hosting first-person footage of the terrorist moving to slaughter Muslims on its homepage. The outlet initially included a moving Giff of the terrorist drawing his firearm.

The Sun is one of a few outlets to defy a request from the New Zealand police not to share the “extremely distressing” footage. The Daily Mirror and the Daily Mail also featured parts of the video:

The Sun’s homepage is a *gif* of the terrorist’s first-person video, surrounded by advertising, just looping. pic.twitter.com/nYM1Ei5okz

The thing is, the Sun, the Mail and other UK tabloids have long demonised Muslim people. And this has led people to argue that they are partly responsible for such terrorist attacks:

“What could possibly be fuelling this Islamophobic terrorism that happened in Christchurch, New Zealand?!”

And the outlet has form here. After the Westminster attacks during the 2017 general election, the Sun apparently sought to “boost its circulation” through posting photos of the victims. Again, it didn’t matter that the Met police specifically requested that nobody circulated pictures of the injured:

As alway, The Sun trying to boost its circulation and traffic at the expense of victims of terrorism pic.twitter.com/yKewUqcVL7

Satirical artist Darren Cullen has laid bare the mutually beneficial relationship between tabloids like the Sun and terrorism. Cullen sent a satirical advertisement to the marketing departments of over 200 companies that often advertise with the Sun: 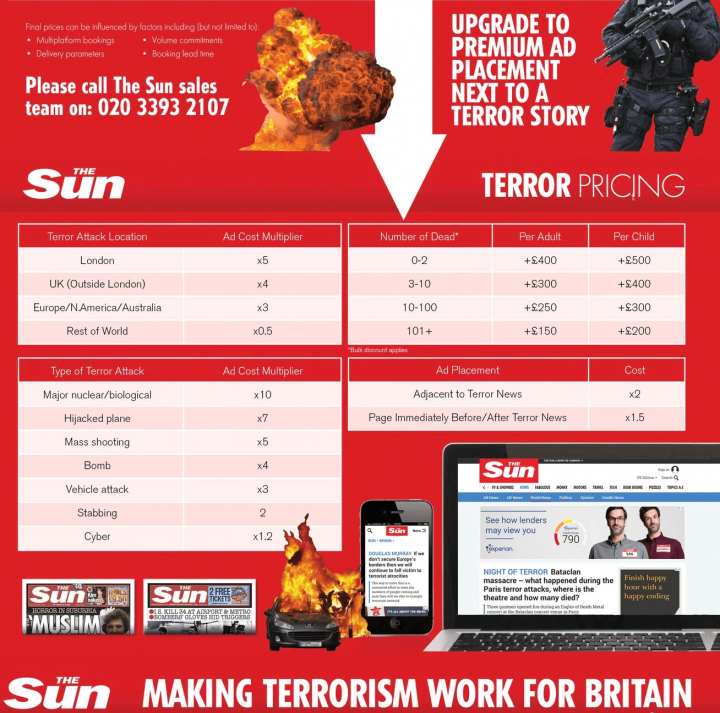 This vilification of minorities in the mainstream media has to end. Otherwise, we will be mourning the victims of far-right terrorist attacks again in the near future. And the Sun will continue to milk profits from the very tragedies it has helped to facilitate. Frankly, that’s utterly despicable.