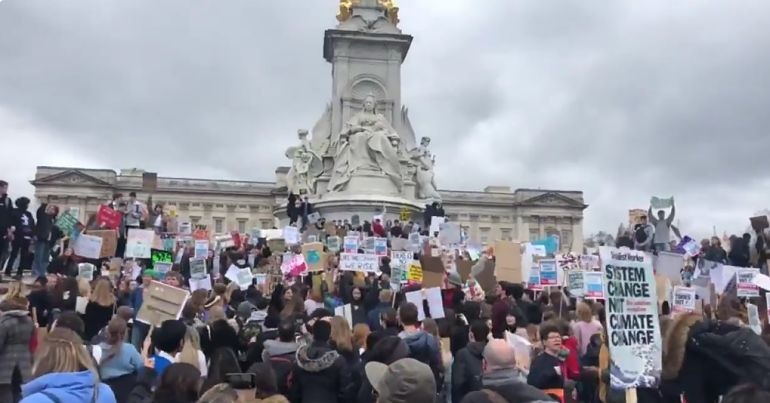 The British media has utterly failed (again) in its response to the New Zealand terrorist attack. Numerous outlets have featured the killer’s live stream of the massacre – and the manifesto he wrote justifying his actions. That’s presumably exactly what he wanted, hence his choice to release these materials in the first place. The British media is dancing to the terrorist’s tune.

The Guardian, however, published another manifesto, on 15 March. And it’s one media outlets should be splashing all over their front pages. Because it contains a list of vital demands on the climate catastrophe from UK students. These are the voices the media could be amplifying, rather than the one of a far-right mass murderer.

It follows a strike in February where thousands of young people protested across the country. The UK Student Climate Network is helping to coordinate the strikes. As UKSCN explains, the choice of 16-year-old Swedish student Greta Thunberg to ‘take a stand’ and strike every Friday since August 2018, has inspired the now global movement.

Tomorrow we school strike for the climate in 1769 places in 112 countries around the world. And counting.

Everyone is welcome. Everyone is needed. Let’s change history. And let’s never stop for as long as it takes. #fridaysforfuture #schoolstrike4climate #climatestrike pic.twitter.com/xpCLQN8icv

So, UKSCN has released a manifesto. It explains:

The climate is in crisis. We will be facing ecological catastrophe and climate breakdown in the very near future if those in power don’t act urgently and radically to change our trajectory… It’s abundantly clear: change is needed, and it’s needed now!

In the statement, the group makes four key demands of the UK government. It says that previous generations and those in power have “have failed to protect us”. So, they’re taking it upon themselves to create “the change we need to see in the world”.

Firstly, UKSCN says the government “must declare a climate emergency”. It calls on the powers that be to protect life on Earth and take “active steps” towards climate justice. It urges the government to:

realign our economy along environmental principles to protect not only the planet, but also to create an equitable world for all people.

UKSCN also attacks the current education system, calling for reform to the curriculum so it makes the climate crisis “an educational priority”. The group says:

Schools are not preparing us for the world we’re about to enter, yet still prepare us for jobs and a society based on the system that caused the crisis.

Furthermore, UKSCN demands the government come clean with the wider population too. It asserts that people need to know the truth about “the severity of the ecological crisis and the necessity to act now”. Not least because such information is vital if the general public is to “hold those in power to account”.

Finally, the group calls on the government to lower the voting age to 16 because “young people have the biggest stake in the future”. It says:

For too long we’ve been disenfranchised and frozen out of the political system. It’s clear that politics isn’t working. We can’t keep operating within these failing models of civic engagement.

It is both inspiring and heartbreaking to witness these young people’s rousing call to arms. It’s brilliant seeing their passion for the natural world in which we live; and their determination to make sure there is a future waiting for them. But it’s tragic that they are having to step in where the ‘grown-ups’ have failed. Because conventional logic positions adults as protectors of the young. But in our abysmal decades-long failure to address the Earth’s environmental degradation – human-induced degradation – adults have recklessly abdicated that position.

Right now, in fact, young people are behaving more responsibly with adults’ futures than so-called grown-ups are with theirs. Shame on us all. And shame on all the ‘adults’ in the British media who are making a terrorist’s manifesto more memorable than these young people’s one through their reporting today.