Children are leading a global revolution to save our planet - Canary 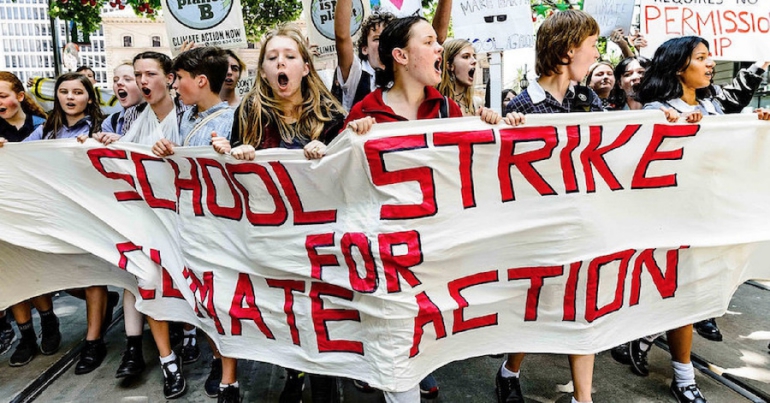 On 15 March, children around the world marched out of school to demand their voices are heard about the growing climate chaos that we all face. Under the banner of #ClimateStrike and Strike4Climate, these young people are a powerful force.

Swedish 16-year-old Greta Thunberg has inspired children around the world. She’s been on strike, leaving school every Friday, since August 2018, to “urge leaders to do more to tackle climate change”. Now, the movement has grown globally, and on 15 March, children around the world marched out of school to share their rage and demand that governments and leaders take urgent action.

Tomorrow we school strike for the climate in 1769 places in 112 countries around the world. And counting.

Everyone is welcome. Everyone is needed. Let’s change history. And let’s never stop for as long as it takes. #fridaysforfuture #schoolstrike4climate #climatestrike pic.twitter.com/xpCLQN8icv

A map showed just how huge this movement has grown in less than a year:

That is the current map of #schoolstrike4climate planned around the world for this Friday! https://t.co/SpV13s6AGM I wonder: Has there ever been such widespread protest action in human history? #FridaysForFuture pic.twitter.com/ddedrzFqff

Adults, governments and leaders around the world need to listen. Because as Thunberg noted, kids marched out of school in “2052 places in 123 countries on all continents”:

Latest update say:
2052 places in 123 countries on all continents, including Antarctica.
So, the question is:
What will you do on March 15 2019? https://t.co/ROmtFMrj6Y#schoolstrike4climate #FridaysForFurture #climatestrike #WhateverItTakes
(picture from Sydney today) pic.twitter.com/oFr6IryCnk

This action is the second in the UK, following a strike on 15 February.

In London, early reports indicated that the Metropolitan police tried to shut down the protest:

MET police are already trying to shut down peaceful protest. We are not being allowed to set up amplified sound. Student voices need to be heard. Help us make this happen @SadiqKhan @theresa_may @michaelgove @jeremycorbyn

But, children took a “spontaneous route” and took “police by surprise” as they marched towards Buckingham Palace. As the Guardian reported:

Officers scrambled to prevent the youngsters, who were chanting “we want change”, reaching the Queen’s residence but the crowd was too big.

Later, they “blocked all the roads leading onto Trafalgar Square, bringing widespread disruption to central London”.

If I was to guess I'd say up to 15/20 thousand children are here in Parliamant square already and many many more are pouring in from the tubes and across the bridges.

It is huge. #ClimateStrike pic.twitter.com/mFe1sYJh9G

Children left school around the UK, from West Cornwall:

I’[email protected] tears again. This is Penzance. These kids might be giving all of us a future. #ClimateStrike pic.twitter.com/F4MOb0G6mP

To Brighton, where they chanted “Oh, Jeremy Corbyn”:

2,000+ kids at the Brighton youth #ClimateStrike are shutting down the centre of town to the sound of 'Oh Jeremy Corbyn' pic.twitter.com/mf6vTyldYG

They also marched in Scotland:

Today's #climatestrike has been impressive all across Scotland…Perth, Aberdeen, Glasgow, Edinburgh and more. #Fridaysforfuture pic.twitter.com/fjVPdO1EAO

Hands around the world

What is so incredible about this movement is the unity and solidarity shown by young people globally. On one day and across different time zones, they marched with a powerful message:

Respect! These students from Bukidnon, Philippines took a 12-km mountain-terrain walk to converge with more students in the province and join the global #schoolstrike4climate ✊🏽#climatestrike #youthstrike4climate #FridaysForFurture pic.twitter.com/ugpxthpDrb

South Africa! We See You!!! Young people are rising in 2052 places in 123 countries on every continents.

In the UK opposition leaders and MPs showed solidarity with these young people.

Jeremy Corbyn gave a full statement in support of the strike and also pledged that a Labour government will take action:

It’s past time all of us stopped looking the other way, learn from the passion and wisdom of young people and join them in actively organising for a better future.

So inspired by the incredible young people on #ClimateStrike in #Brighton & around the world today!

World leaders are starting to sit up and pay attention – but don't let them fob you off with greenwash.

Keep going until you win real and urgent action.https://t.co/rOZxJV3RDp https://t.co/H7S3Zr0Vbu

And congressperson Ilhan Omar offered similar support in the US:

I’m answering that demand Secretary, and will be standing with them at tomorrow’s march! I hope our country and congress will answer their demand as well. https://t.co/Qqtkrw6W2D

The UK government and leaders around the world can’t ignore the powerful force of these children. Their voices and actions are growing stronger day by day. As they must. Because time is running out.