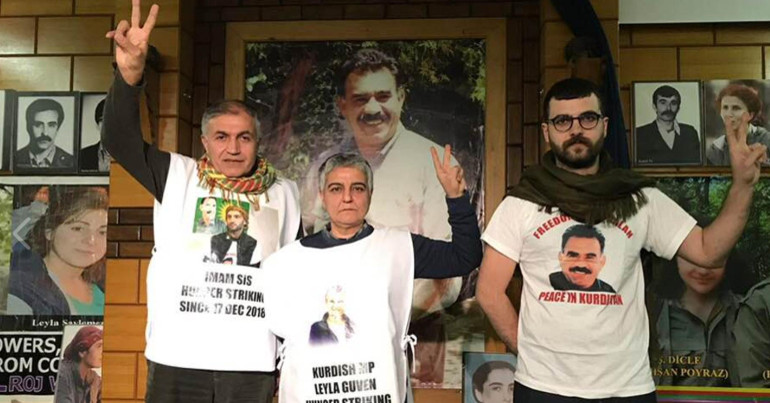 Three Kurdish people in London have joined thousands around the world on indefinite hunger strike. Ali, Said and Nahide have taken the drastic step, knowing that their lives are on the line. They demand that Turkey ends the solitary confinement of Kurdish leader Abdullah Öcalan, and allow him access to his lawyers and family visits. Öcalan has been imprisoned for 20 years.

Their hunger strike is taking place in the Kurdish Assembly in Haringey. The Assembly made this statement:

We… call on everyone who identifies as Kurdish, or who possesses any basic human values, to stand with us and speak against the isolation, for tomorrow will be late and we will have no words to say. Any protest against the tools of fascism is effective. However, nothing is more effective and beneficial than making the ultimate sacrifice and giving their life for this cause.

The hunger strikes were instigated by Kurdish politician Leyla Güven. Güven is approaching her 130th day without food and is getting much closer to death. As Güven’s body fades, the mainstream media remains mostly silent.

Meanwhile, Ilhan Sis, from Newport, Wales, has reached the 90th day of his hunger strike. And in Strasbourg, 14 more activists are also approaching their 90th day. A number of them have very serious health problems. A doctor stated that their symptoms “are coming to a very dangerous stage.” The hunger strikers are all refusing hospital treatment.

Europe’s indifference towards the Kurdish issue in general and the Öcalan case in particular, has left us with no alternative. The continued failures of European institutions, such as the Committee for the Prevention of Torture and the Council of Europe, to carry out their duty are forcing us, as European citizens, to embark on this fatal course. Their failure to act points to a crisis of democracy and loss of humane values, and they will be responsible for any fatality.

We need to act now

Time is running out for the hunger strikers. The Turkish state isn’t listening to their demands. Instead, it is responding using brute force, assaulting and arresting them.

And so it’s down to us. We urgently need to take action.