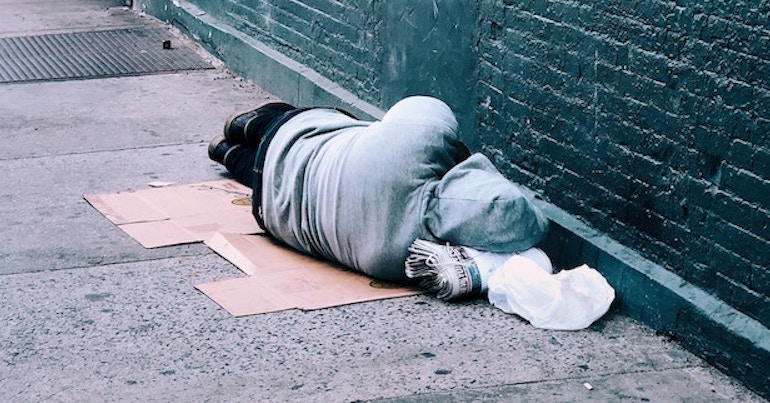 A council in Torbay told a disabled young person to “sleep rough occasionally”. Despite medical evidence, the young person was refused “priority” need for housing. And The Canary has found out that this young person is not alone.

Ellie Waugh who runs Humanity Torbay told The Canary that the letter was sent to a female “aged between 20 and 23”. She suffers from “depression, emotionally unstable personality disorder and borderline personality disorder”. Waugh also said that the young woman had “scars from self-harming”. A letter from Torbay council published on Facebook stated:

I believe that you are resilient enough to manage with a reasonable level of functionality and I am not satisfied that your ability to manage being homeless, even if that homelessness were to result in you having to sleep rough occasionally or in the longer term, would deteriorate to a level where the harm you are likely to experience would be outside of the range of vulnerability that an ordinary person would experience if they were to be in the same situation as you.

Other people have come forward with similar stories since this letter was published. One woman survived domestic abuse and has a child diagnosed with autism. Yet she was refused priority help by Torbay council:

Says it all from a concerned mum about her boy torbay council………. How many more….he is not priority need they told him….

The Canary has seen evidence of another three similar cases.

With regards to the letter that has been shared online, what has been shared isn’t the full content. What has not been shown is an explanation of who would be considered in priority need and why this person is not. The letter also includes a clear explanation on their right to request a review of this decision, and we encourage the person concerned to exercise this right if they feel the decision has been made incorrectly.

Conservative-run Torbay council also stated it was “continuing to support this person to find accommodation”.

The Canary asked Torbay council for comment about the other letters. There was no response at the time of publication.

But Waugh read a statement from the woman involved in this case to The Canary. It tells a different story:

I need a permanent home… I’m worried about my future. The council have lied to me and the media, they have not tried to help me. Torbay council have made me feel worthless and completely suicidal and that I’m not worth contributing anything to society. I am more than that: I am a person. I have severe mental health problems… I’m one of many people who has been treated badly by them and I’m not a number, I am a person… Please help me.

The young woman also said, that no one from Torbay council had contacted her. She said, “I could be dead for all they care”.

And as Humanity Torbay pointed out, this is not an isolated incident:

Humanity torbay… Have 5 more housing letters from torbay council…. Each one worse than the last one…… So torbay council what you got to say about that then………………😡😡😡😡😡😡😡😡😡😡😡

These letters show the extent of the current homeless crisis in the UK.

As The Canary reported, recent government figures revealed that in 2018, the “total number of people counted or estimated to be sleeping rough on a single night” was 4,677 – 74 people (2%) fewer than in 2017. But the fall in these figures doesn’t account for the fact that rough sleeping has soared under consecutive Conservative-led governments. It’s still up 165% since 2010. And many homeless charities questioned the accuracy of these statistics. And as The Canary also reported, the number of homeless people dying on the streets or in temporary accommodation has more than doubled over the last five years.

Now, it seems, vulnerable and disabled people have been told that there’s ‘no extra risk’ if they are forced to sleep rough.

In Torbay, figures released in 2018 also showed a rise in rough sleeping. The figures highlighted that 51% of those sleeping rough also had a “mental health issue that would make it hard for them to live independently”.

Homelessness and mental health often go hand-in-hand, and people with mental health problems are at a greater risk of homelessness. Too often it is the most vulnerable people who slip through the net, and the consequences can be catastrophic.

These letters are from people in just one area of the UK. They suggest that this may be just the tip of the iceberg. One person rough sleeping is one too many. The rising number of vulnerable and disabled people forced to sleep on the streets is a tragedy.