Tory radio host's cockeyed crusade against climate strikers gets called out, by a Tory MP - The Canary 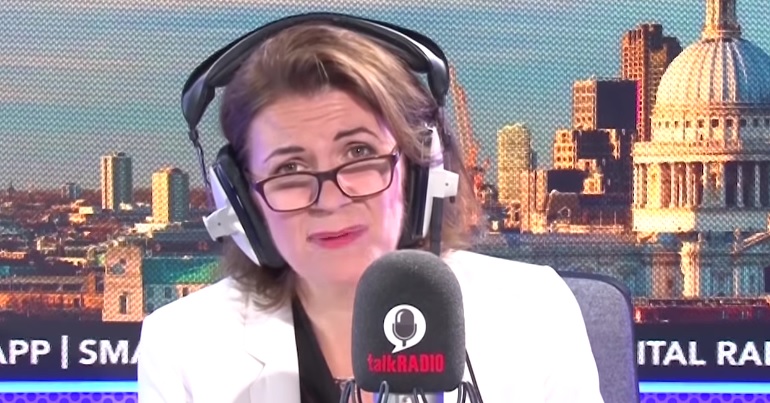 Tory radio host Julia Hartley-Brewer is not a fan of the youth climate movement. Back in August she joined Aaron Banks in ‘mocking the silly claims’ of climate activist Greta Thunberg. And on what looks to be the “biggest day of climate action in planetary history” she, of course, got ready to scold those pesky kids.

Her takedown of the climate strikers didn’t got too well though. Because she was called out by a Tory MP, among others.

During her talkRADIO show on 20 September, Hartley-Brewer spoke to Conservative MP Tobias Ellwood:

Julia: "To strike against the government not doing enough to tackle climate change when this is the government that is tackling this issue is the height of ignorance."@JuliaHB1 | @Tobias_Ellwood | #ClimateStrike pic.twitter.com/TrQVZT946w

In the discussion, Ellwood detailed his concern about the rising temperature of the planet:

People don’t understand what is happening to our plant, our fragile planet… we are going to see sea levels rise. Bournemouth, where I represent, will see a metre worth of sea level come in… migration patterns will change, areas where we can grow food will change as well, this is going to be enormous

That’s a very strong argument for children to have maybe a day of lessons in school about the issues… that’s not an argument for them to go around and stand in Parliament Square with a placard, is it?

She also asked Ellwood whether she, as someone “passionate” about Brexit, should give her children a day off during a weekday rally on that issue, because it’s such an “existential issue for our democracy”.

This was too much, even for a fellow Tory. Ellwood replied:

It’s a provocative question… the scale of this is very, very different…

Democracy is absolutely important. But one expression of democracy is the people themselves, across the world, expressing something when politicians – the democratic elected people – don’t listen. And what we’re seeing across the world is the fact that we’re not doing enough, fast enough

Hartley-Brewer then went on to claim that the UK is leading the world in tackling climate issues. It’s not. In fact, the Committee on Climate Change (CCC) claims the country is ‘going backwards’ on adaptation in the crisis.

“You are kidding me”

Ellwood wasn’t the only politician Hartley-Brewer locked heads with over the issue either. She also interviewed the Green Party’s co-leader Jonathan Bartley:

One particularly ridiculous moment came when Bartley raised the UN Intergovernmental Panel on Climate Change (IPCC) 2018 climate report. The report concluded that global warming must be kept to 1.5°C at the most, half a degree hotter than right now, if we are to limit the most severe effects of climate change. The risk of large-scale food scarcity, poverty, species loss and extreme weather, among other things, becomes more certain at 2°C, the group of UN scientists found. According to the report, we don’t have much time left until we reach the 1.5°C limit.

Yet, Hartley-Brewer’s argument against this report, and reality, was:

we’ve had one of those warnings pretty much every couple of years. We’re still here and the planet hasn’t warmed that much… and we’re all still alive.

You are kidding me, right?

And it’s not only Hartley-Brewer that’s kidding us. It’s talkRADIO for letting her spout this ignorant nonsense on the climate crisis on its radio station. No wonder children are taking the matter into their own hands, with these sort of ‘adult’ responses to the emergency.