Screw Johnson's elitist PR stunts. Here's why Corbyn is the people's leader we so desperately need. - The Canary 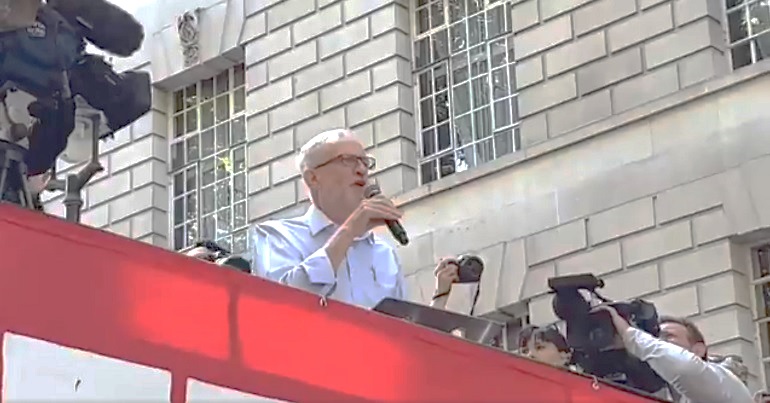 As millions of people took part in a global climate strike on 20 September, UK prime minister Boris Johnson was nowhere to be seen on the streets. Instead, he was tweeting about meeting military elites.

PM-in-waiting Jeremy Corbyn, meanwhile, was on the front line with ordinary people showing yet again why he’s the leader we so desperately need.

As is his custom, Corbyn was on the streets alongside protesters. And people in London greeted him with chants of “Oh, Jeremy Corbyn”.

The Labour leader also gave a powerful speech, explaining why his government would fight hard to deal with the global climate crisis:

⁦@jeremycorbyn⁩ Standing in Solidarity with young people across the world. #ClimateStrike #FridaysforFuture pic.twitter.com/DQ30pp9Mdm

Let’s have no more of this hand-holding with Donald Trump.

He also compared the strike with the mass public efforts to avoid the illegal and disastrous Western invasion of Iraq in 2003, saying:

It feels like the global demonstrations we held in 2003 to try and stop that terrible war in Iraq.

“People coming together across the planet for peace, for justice and sustaining our world” – ⁦@jeremycorbyn⁩ pic.twitter.com/50oC9NYtvu

Green revolution is an “absolute priority”

When a reporter asked Corbyn if the climate emergency was a priority, he answered:

Absolute priority for everybody. If we can’t protect our planet, what can we protect?

And he backed this up by stressing his party’s commitment to a “green industrial revolution“:

This #ClimateStrike is inspiring – full of young people who are demanding change to protect our planet and their future.

Labour will honour that demand by kickstarting a Green Industrial Revolution. pic.twitter.com/avaExj8wKe

He had previously stressed that, among other projects, this plan “will create around 400,000 jobs, high-skilled, good quality, well paid jobs, all around the country” in green industries.

His actions, meanwhile, show just how important he thinks the fight against climate chaos is. Because before attending the main protest in London, he also backed climate strikers in his own constituency:

Young people here and across the world are making it impossible to ignore the environment and climate emergency.

This is the wonderful youth #ClimateStrike in my constituency – now I'm on my way to the main London demonstration. pic.twitter.com/GI1AniUnpb

No flashy cars. No security personnel.

Many protesters, meanwhile, asked where Boris Johnson’s government was:

Climate activists chanting along to the tune of Oh Jeremy Corbyn

📣 Where the f*ck is the government? 📣 in front of the Palace of Westminster #FridaysForFuture #ClimateStrike #schoolstrike4climate #GlobalClimateStrike

The only reference to the climate strike from Boris Johnson on Twitter was an apparent attack on the protesters. The Conservative Party Twitter account said “while some politicians prefer to protest, @BorisJohnson and the Conservatives are taking action”. And it announced a token policy of “12 new renewable projects”. This seemed like a poor afterthought, however, in comparison to numerous previous tweets about increasing military spending to “meet evolving global challenges”:

🇬🇧 @BorisJohnson and the Conservatives are investing an extra £2.2 billion in our Armed Forces so they can meet evolving global challenges and keep us safe 🇬🇧

For most British citizens, increasing military spending during peace time (excluding ongoing covert wars) is far from being the top priority. On the other hand, a recent survey suggests that the climate crisis is a priority for many. The vast majority, for example, believe we are facing an emergency; and 64% agree that “time is running out to save the planet”. Only 23%, meanwhile, think the government is doing enough.

Boris Johnson and his government may believe that now is the best time to boost the military industrial complex. And the recent schmoozing with human rights abusers at the controversial DSEI arms fair suggests they do. But for large numbers of people throughout Britain, the true ‘global challenge’ today is the climate emergency – something that requires bold, systemic change rather than a boost in spending for military elites.

Yet again, Corbyn is on the right side of history. And Johnson is MIA.