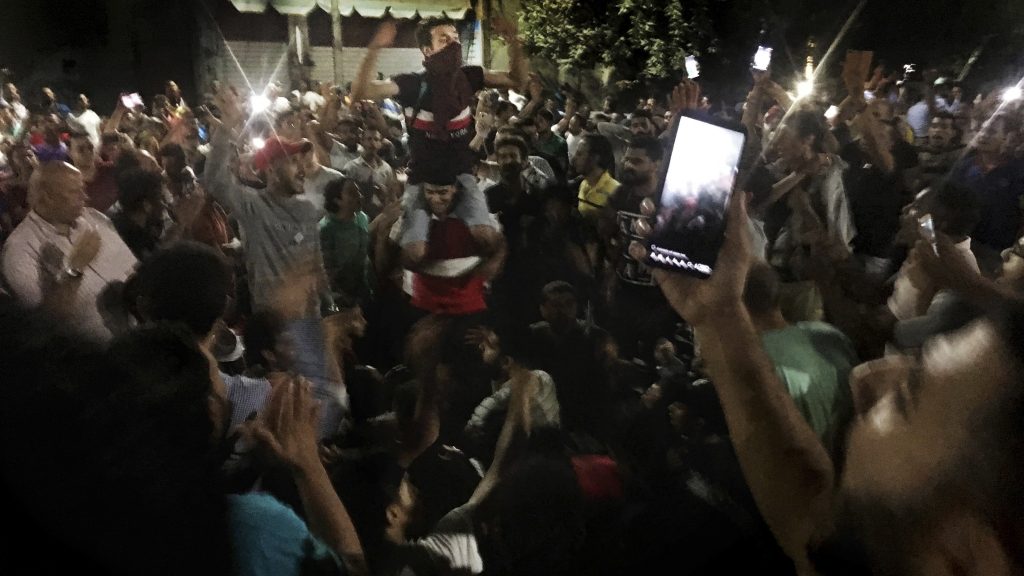 Rare, anti-government protests have broken out in Egypt calling on President Abdel-Fattah el-Sisi to step down.

As Campaign Against Arms Trade (CAAT) noted, these were the first major protests since the overthrow of President Morsi in July 2013. The coup was led by General Sisi, who is widely accused of overseeing the Rabaa Massacre in August 2013 which killed 900 people. Sisi was appointed President in 2014 and has subsequently ‘won’ two totally illegitimate elections.

The Sisi regime has an appalling human rights record. It has widely been accused of carrying out arbitrary detention, torture and other terrible abuses.

Despite its authoritarian rule, it has been able to rely on the political and military support of Downing Street. It is totally hypocritical for Governments like the UK to talk about human rights and democracy while arming despots like Sisi.

If they want to reverse the damage that has been done, then Boris Johnson, Dominic Raab and their colleagues must join the calls for Sisi to step down and allow real democracy in Egypt. It is long past time for the human rights of Egyptian people to be put ahead of arms company profits.”

In the capital, Cairo, dozens of protesters gathered on Friday night near Tahrir Square, the epicentre of the 2011 pro-democracy uprising that toppled long-time autocrat Hosni Mubarak.

The authorities should recognise that the world is watching and take all necessary steps to avoid a repetition of past atrocities.

In viral social media videos posted over the past weeks, Muhammad Ali alleged his contracting business had witnessed the large-scale misuse of public funds in the building of luxurious hotels, presidential palaces and a tomb for Mr el-Sisi’s mother, who died in 2014.

The allegations came as economic reforms and austerity have squeezed Egypt’s lower and middle-classes badly.

In a rambling speech on Tuesday, El-Sisi angrily dismissed the allegations as “sheer lies”. He portrayed Ali’s videos as an attempt to weaken Egypt and undermine the public’s trust in the military.

He said he would continue building new presidential residences for the good of the country. “I am building a new country,” he said.

The president also warned Egyptians against protesting or repeating the 2011 uprising.

On Friday, security forces speedily dispersed the scattered protests, which came directly after a football game between al-Ahly, Egypt’s biggest team, and their rivals Zamalek.

No casualties were reported. Unauthorised protests are not allowed in Egypt.

There were also small protests in other cities including the Mediterranean city of Alexandria.

In a press release CAAT said:

Despite the regime’s appalling human rights record, it has been a major buyer of UK arms.

Since the coup in July 2013 the UK Government has licensed £141 million worth of arms to Egypt. These include licences for assault rifles, small arms ammunition, weapon sights and armoured vehicles. A full breakdown of arms sales is available here.

Last week, representatives of the regime were on the guest list for DSEI 2019 in London, one of the world’s biggest arms fairs. The invitation was sent by the UK Government. Egypt is included on the UK Government’s list of ‘core markets’ for arms exports.

In 2011 the Egyptian authorities used UK-made tear gas against pro-democracy campaigners. Last night there were reports of arrests and tear gas being used to disperse protesters.