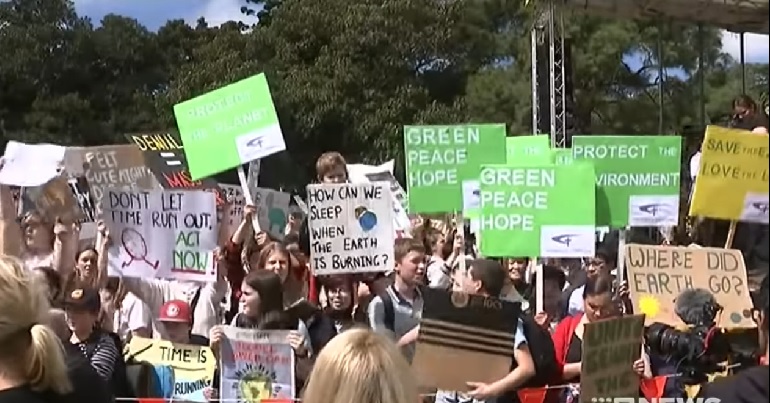 People all over the world are striking today to demand action for climate change. Tweets using the hashtag #climatestrike show huge crowds gathering in major cities around the world:

Today is the biggest day of climate action in world history. #ClimateStrikehttps://t.co/h1JNvn8tQU pic.twitter.com/4IHdgGr9S8

Waking up and learning about the HISTORIC #ClimateStrike turnout worldwide is the BEST way to wake up. From Australia to Indonesia to Uganda to, I mean, practically everywhere, millions of people have already taken the streets.

Young people at the forefront

Taking inspiration from activist Greta Thunberg’s call for action, many protesters are young people striking to demand action for their future. With an array of creative placards and banners, young people everywhere have been at the forefront of protests today. Many have missed school and university classes to show their support for climate action:

Boundless love and respect for the schoolkids out on strike today pic.twitter.com/1gaEB9Y1jb

Uganda has come out for the #ClimateStrike. Amazing pic.twitter.com/0s48j5s0PG

The beauty and brilliance of people power!

More than 1000 people from youth communities marched 1.5km to support the #climatestrike in Indonesia. pic.twitter.com/TeRUrDGXAI

Moreover, people have called attention to the ongoing role of indigenous tribes and people in promoting sustainable living and preserving the planet:

First Nations peoples were leading the #ClimateStrike because they are and have always been at the forefront of the fight to protect land, water, air and Country. #AlwaysWasAlwaysWillBe pic.twitter.com/ipWcwgvVsh

Indigenous elders from the Gulf country in the Northern Territory have come to support the #ClimateStrike – travelling 3 days to do so. “All you young students leading the strike, thank you.” “Who is suffering the most? Remote communities” #MECO6900 pic.twitter.com/6WCXjo6M4W

Eve of #ClimateStrike think about the prisoners – all Black, Indigenous, racialized, migrants, poor, women, trans people – who cannot join us in strike but are on frontlines of #ClimateChange & eco-apartheid in toxic & polluting cages. Strike to dismantle all cages and walls!

Many are emphasising the importance of protecting indigenous rights and centring the voices of indigenous groups in the movement to address climate change:

Climate change will disproportionately impact remote Indigenous communities – these folks need to be at the front when we are talking climate solutions ☀️ https://t.co/DYjxa6Z6A5

In solidarity with our indigenous sisters, I joined diverse group of youth from across Canada protesting federal and provincial inaction on climate change at the @canada #YouthSummit2019 by staging a die in at @JustinTrudeau’s town hall. #ClimateStrike #cdnpoli ✊🏼 pic.twitter.com/CTqU4xWuCB

“We must defend indigenous communities who are fighting in the frontline, we need a transformation of our economic and political systems” @wretchedotearth #ClimateStrike London 🌍 pic.twitter.com/EOXn40pctq

Hey after the #ClimateStrike go find engage with local Indigenous groups to get information about their people’s sustainability practices. Our knowledges kept this planet alive for the past 80k+ years so we know what we are talking about.

With the UN climate summit scheduled to take place on Monday 23 September, the scale of these protests sends a powerful message. We have reached a point where inaction is no longer an option. Capitalism continues to be the biggest cause of climate change, but world leaders motivated by profit have been slow to action. Let’s hope, in the face of pressure from younger generations, they finally sit up and take notice.