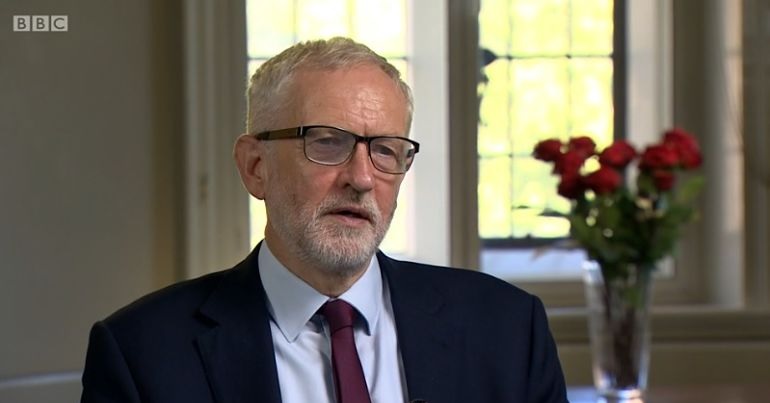 The BBC published an article on an interview with Labour leader Jeremy Corbyn on 19 September. A short video of the interview featured alongside the article by the BBC.

But the public broadcaster really should have thought better than to use the video alongside that headline. Because the video shows the Labour leader’s full remarks in the interview, as opposed to what the BBC News website prioritised in its reporting.

Seeing the two side by side makes it apparent just how spectacularly transparent the spin in the article is.

In the video, the first question thrown at Corbyn is:

In a few weeks time, after a general election, you could be one of the most powerful men in the world. Are you up for it?

The Labour leader answered, without hesitation:

But the BBC didn’t decide to convey Corbyn’s resolute message to readers in its article’s headline. Instead, it went with:

That’s not a lie. Because immediately after the Labour leader gave his resounding “yes” to the question on his readiness for becoming PM, the interviewer fished for more:

To this, Corbyn’s response was somewhat less adamant. After a pause for thought, he gave a cautious “yes” and continued:

Obviously respectful of the mandate I hope will be given, but utterly determined to carry through into government our programme to bring about better social justice all across this country. And very determined to achieve it, and achieve the environmental aims that we’ve got, and to provide hope, particularly for young people in our society.

So, in the vast amount of his comments, Corbyn sounded decidely assured of his capability and desire to be in government. The point he appeared most uncertain on was whether he was “daunted”. Yet the BBC decided to lead with this comment in its article on the interview.

The BBC chose not to comment when asked about the article by The Canary.

Masterclass (in how to get it wrong)

Essentially, this is a masterclass in the sort of spin that media outlets have been churning out for years. Because the BBC has detailed Corbyn’s wider comments in the piece. But how it decided to deliver these comments to readers, especially in a culture where many people only read headlines, tells you everything you need to know about its message.

Although, in order to be an actual masterclass, a video that unmasks the truth shouldn’t be placed alongside the spin itself. That was a gross oversight by the BBC as it resulted in the broadcaster’s spin being scuppered by its own video content. Oof.