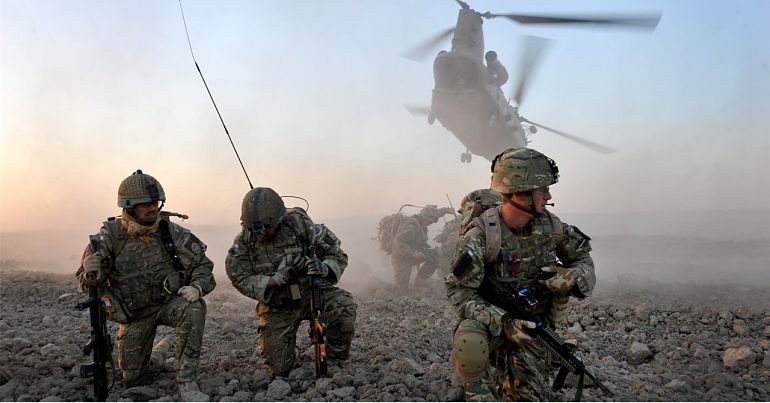 Many people in Britain live under the illusion that war happens ‘out there’ and only involves other countries across the globe. But as new evidence from journalists Mark Curtis and Matt Kennard demonstrates, this isn’t true. The UK’s currently engaged in “seven covert wars”. And our government also continues to profit from these wars.

Curtis and Kennard’s article in the Daily Maverick reveals that UK special forces (UKSF) are currently engaged in conflict in: Afghanistan, Iraq, Libya, Pakistan, Somalia, Syria and Yemen. Yet the nature of UKSF operations means that our “political system enables ministers to conduct secret wars in our name with zero parliamentary or public oversight”.

As the authors explain:

The British government states that its policy on the covert wars it fights is “not to comment, and to dissuade others from commenting or speculating, about the operational activities of special forces because of the security implications”.

Added to this, the UK’s Freedom of Information Act gives “absolute exemption” to UKSF activities. So this makes it virtually impossible for anyone to question or “scrutinise policy”. And if any information is leaked to the establishment media, there’s another layer of control in place.

to prevent material deemed damaging to the national security interest from being published in the media.

So any leaks that do emerge, must first be “approved” and “sanctioned” by the DSMA committee. As the article also shows, these covert wars often take place “alongside MI6”:

The UK’s special forces are shielded from all forms of democratic accountability. Currently they are fighting wars in at least 7 countries, often alongside MI6, who are also completely unaccountable.

But another crucial factor is that in most of the seven countries named, the UK government also profits from selling arms to parties leading those same wars. Since 2008, UK arms export licences totalled £44bn.

Saudi Arabia has been leading an assault on Yemen since 2015. The situation’s now the “world’s worst humanitarian crisis”. According to Curtis and Kennard:

British special forces have been secretly working in Yemen since at least 2016, while the UK’s Ministry of Defence has been covertly supporting the Saudi air campaign in the country.

There are no UK Armed Forces personnel based in Yemen.

But as this article demonstrates that simply isn’t true. It notes that a 2016 report from Vice News:

based on interviews with UK officials revealed that British special forces were in Yemen. They were, in fact, seconded to MI6, which was training Yemeni troops fighting Al Qaeda in the Arabian Peninsula

Curtis and Kennard detail all the evidence of further involvement of UK forces in Yemen. But UK arms exports also prop up this same war. Arms exports to Saudi Arabia are currently on hold. Yet Liz Truss has since admitted the government broke the law. It shipped £261,450 worth of equipment to Saudi Arabia despite this ruling.

In July, a UN report found that:

As the article shows, UKSF play a role in this:

By 2018, the SAS was reportedly fighting almost every day in Afghanistan, usually in support of Afghan commandos leading the battle against the Taliban.

It states that by mid-2019 there were still about 1,000 UK troops in Afghanistan. And, yet again, there’s further profit here for the UK government. Since 2016, UK arms exports to Afghanistan totalled over £42m.

Curtis and Kennard paint a harrowing picture of the true extent of UK involvement in so many global conflicts. And in too many of these, it’s impossible to ignore the UK’s integral role in the current crises.

For example. chaos followed the NATO bombing campaign of Libya in 2011. David Cameron was instrumental in a military assault that left the country both splintered and a perfect playground for terrorists. But not only did the UK play a leading role in the bombing campaign, it also facilitated unrest in the country while Muammar Gaddafi was in power.

Similarly, the illegal invasion of Iraq caused huge devastation. It also helped unleash a wave of terror around the world that we still see today.

Image below is a military base we’re not allowed to know of, for a regiment we’re given no information on, that’s fighting 7 covert wars hidden from the public. Which we pay for. Good that UK is democracy otherwise SAS might just be totally out of control. https://t.co/Pk5l4FvoZl

And yet our government still profits from death.

Curtis and Kennard’s research is meticulous. The UK is involved in covert wars. Our government doesn’t want us to know this. Neither does it want us to know how much it rakes in from global arms deals. We can’t ignore these facts.