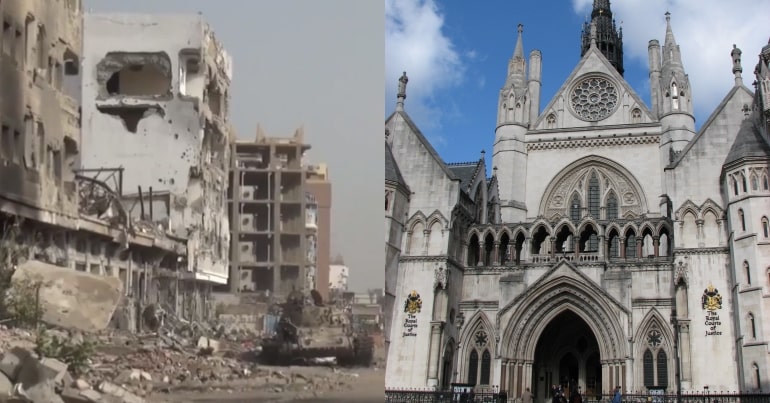 On 20 June 2019, the Court of Appeal ruled that the government granting export licences for arms sales to Saudi Arabia is “irrational and therefore unlawful”. But instead of respecting this ruling, the government is sending a massive ‘fuck you’ to the UK courts and to the people of Yemen.

Minister for trade Graham Stuart says the government is still inviting a delegation from Saudi Arabia to the London arms fair. Defence and Security Equipment International (DSEI) is one of the world’s largest arms fairs. It takes place every two years and will return to the capital in September – along with the Saudi delegation.

According to its website, DSEI provides “valuable opportunities for networking” and is:

DSEI is one of the biggest arms fairs in the world. It exists for one reason only, and that is to sell as many weapons as possible. It will see UK civil servants and military personnel introducing some of the world’s most repressive regimes to many of the world’s biggest arms companies.

According to The Armed Conflict Location & Event Data Project, 91,600 people have been killed in the war with 11,700 reported civilian deaths. Including deaths from hunger, illness and lack of access to health services, the UN predicts the total number of deaths could reach 233,000 by the end of the year.

The UK government is fuelling death and destruction

But as the briefing paper sets out, CAAT is clear that:

And as Smith asserted:

The Saudi-led bombardment of Yemen would not have been possible without UK-made weapons. It has created a humanitarian crisis for Yemen, but for the arms companies it has been a major business opportunity.

Over 100 people were arrested during protests in 2017. Protesters carried out a variety of actions during the course of the week, attempting to stop the arms fair from even starting. Many were acquitted of all charges. As one of the defendants previously told The Canary:

Although several of these acquittals were successfully challenged by the Crown Prosecution Service, the Court of Appeal ruling coupled with the invitation to the Saudi delegation make the legal case for shutting down DSEI even stronger.

Smith outlined why it’s so important that we all take action to stop DSEI, saying:

Smith is right. It’s why every single one of us who can must get to London in September; to put our bodies in the way; to speak up for the people of Yemen and the victims of UK bombs around the world. DSEI must not be allowed to happen. This trade must not continue. And we can all be a part of making this happen.