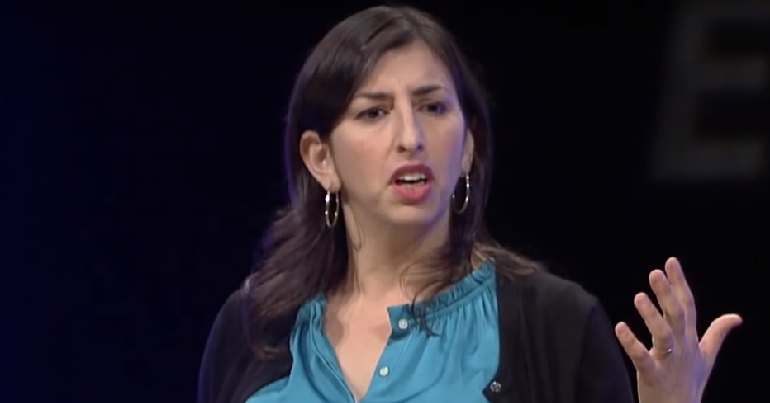 Rabbi Danya Ruttenberg has cut right through Trump’s cynical manipulation of antisemitism to target his opponents. And she insists that most Jewish-Americans “cannot stand Trump”.

This comes amid Trump’s recent attempts to smear vocal opponents (like congresswoman Ilhan Omar) as antisemites and ask them to ‘apologise to Israel’ for proudly opposing the occupation of Palestine.

After Trump’s attacks on progressive congresswomen last week, Ruttenberg tweeted that she was ‘praying for their safety’. And she soon called out Trump’s ‘weaponisation’ of antisemitism allegations:

Once more with feeling:

A thread on Trump and the GOP attempting to weaponize antisemitism against WOC congresswomen and others, aka

Wow This Is Disingenuous

Get A Power Analysis Already

In this thread, Rabbi Ruttenberg (@TheRaDR) deconstructs the current vogue on the right of accusing “The Squad” of anti-semitism. Why are Trump allies doing that? Whose interest does it serve? Hint: They’re not doing it to help the Jews. https://t.co/DVIBigNsBr

She went on to remind people that Trump has exploited antisemitic tropes himself:

Or to put it another way: When we see anti-Semitism and ignore it, whose agenda does that serve?

That's what happened in the fall when Trump suggested the caravan of migrants was funded by Soros.

Trump has long enabled conspiracy theories about George Soros (a Jewish immigrant born in Hungary). He suggested, for example, that Soros was funding the refugee ‘caravan‘ of people fleeing to the US in 2018. There was no proof for this claim. This was the kind of antisemitic conspiracy theory that led one far-right fanatic to murder 11 people at a Pittsburgh synagogue and may have caused one Trump supporter to send a mail-bomb to Soros just days before that. Soros is the high-profile subject of numerous far-right conspiracy theories around the world. Advisers to right-wing Israeli leader Benjamin Netanyahu reportedly played a key role in sending these theories “into overdrive”.

That’s what happens when he frequently uses the anti-Semitic dog whistle “globalist” (even two days after the massacre at the Tree of Life synagogue in Pittsburgh). Trump’s description of Israel as “your country” to a room full of American Jews at the White House Hanukkah party.

And she suggested that Trump – as the person “commanding furious, chanting crowds inciting violence” – had no moral authority on the issue of racism:

Trump, who referred to white supremacists who chanted “Jews will not replace us” in Charlottesville two years ago as “very fine people,” insists that the Democrats have become an “an anti-Jewish party” now.

She had previously stressed that antisemitism is essentially “the fine print of white supremacy”:

This is the perfect encapsulation of a thing. Antisemitism as the fine print of white supremacy. https://t.co/lacI3wzU5A

Trump is pandering not to Jewish-Americans, but to “his Evangelical base”

Ruttenberg believes that Trump isn’t weaponising antisemitism allegations to impress Jewish people, but to rally to what she calls “his Evangelical base”:

Also, consider that Trump's using of antisemitism isn't meant to pander to Jews (except maybe Adelson) so much as to his Evangelical base, which cares for us only insofar as we are useful instruments for them and not for ourselves: https://t.co/eqoKnQdhnX

Trump has controversially recognised Jerusalem as Israel’s capital city. He’s moved the US embassy there, amid international outrage. He has also called for official recognition of Israel’s authority over stolen Syrian land. And he has formed a close relationship with Benjamin Netanyahu; the man who oversaw Israel’s war crimes during its 2014 attack on Gaza (which reportedly killed at least 1,483 Palestinian civilians).

Ruttenberg had previously stressed that, in this context, it’s the evangelical right which is really driving Trump’s shamelessly pro-Israel agenda:

Glad @jonallendc wrote this piece on how evangelicals, not Jews, are the ones driving Trump's Israel agenda, and honored to be quoted in it. https://t.co/wqR2iyJPhh

Trump’s Jerusalem embassy opening incl a pastor who said Jews are going to hell & another who said Hitler was part of God’s plan. Christian Zionists who use Jews/Israel as a tool to bring the end times—& Trump—are not 👏 our 👏 friends. 👏 https://t.co/zgUToDLjCf

Well, this here is a thread with statistics proving that most Jews do not ride with Trump. We do not like the guy.

73% think Jews are less secure than 2 years ago.

But American Jews, by and large, cannot stand Trump, knows who he is and what he stands for, and know that our work is for a just immigration system, equitable distribution of wealth, separation of church & state, and solidarity with everyone else targeted by white supremacy.

Indeed, in one recent poll, 71% of Jewish respondees disapproved of Trump. In another poll, 70% viewed Trump “unfavorably”. And 73% thought Jewish-Americans were “less secure than they were two years ago”; while around 60% blamed Trump (at least in part) for recent antisemitic massacres.

Many Jewish Americans reject the President’s transparent attempt to divert the country’s attention from his own moral failings, just as we reject his attempts to politicize Israel and the rise of anti-Semitism. … Jews have experienced the devastating consequences of hatred and intolerance throughout history and do not want to be used as political pawns in Trump’s Twitter feed.

White supremacy and the status quo

To shout down progressive voices, Trump cynically uses the Jewish people as a political football – all while emboldening the very far-right extremists behind rising antisemitic murders. As Ruttenberg makes very clear, Trump is no ally to the Jewish people. Instead, stopping Trump and his fascist allies is key to defeating antisemitism and all forms of toxic racism.