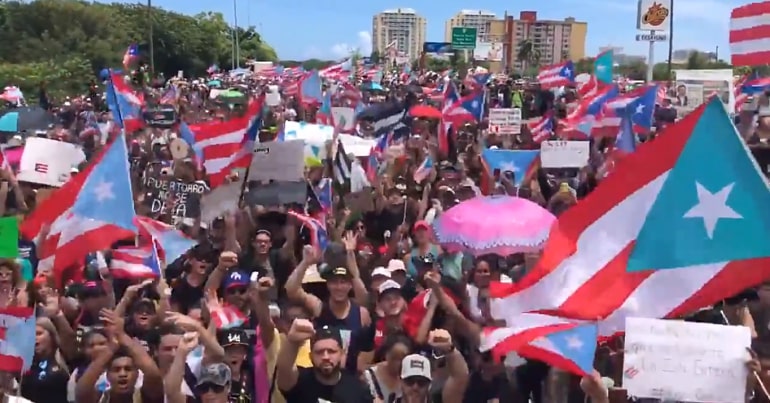 Hundreds of thousands of protesters are currently filling the streets of Puerto Rico to demand the resignation of their governor.

The neglected US territory, “destroyed“ in 2017 by Hurricane Maria, ‘belongs to‘ the US (with the latter ‘making the rules’); but its people can’t vote in presidential elections. And as Slate described in June, “although Puerto Ricans fully pay into the U.S. Medicare, Medicaid, and Social Security systems, they cannot collect the same benefits as citizens in the 50 states”.

On 13 July, the Puerto Rican Center for Investigative Journalism leaked 889 pages of conversations between governor Ricardo Rosselló and his “inner circle”. The messages exposed Rosselló’s use of misogynistic and homophobic language, as well as a disinterest in helping the Puerto Rican people after Hurricane Maria.

The protests, which are the largest in the island’s recent history, are not only a response to Rosselló’s choice of wording. Deeper than that, independent news outlet NACLA reports that they are a reaction to “a broader context of violence, degradation, and exploitation”. As author Naomi Klein added:

Absolutely extraordinary. Sending love and solidarity to Puerto Rican revolutionaries who are showing the world how it's done. This is about #RickyRenuncia but also the anti-democratic Junta, the odious debt and the right to sovereignty on every front! https://t.co/LDxRwJNkWM

“Puerto Rico will rise up”

Since the leaking of the texts, the crowds have swelled larger and larger. This week, an estimated 500,000 people hit the streets of capital San Juan – roughly a seventh of the island’s total population. Massive pressure is therefore mounting on Rosselló, who is still refusing to resign.

The Puerto Rican police, meanwhile, have begun to respond to the protests with increasing violence. The police commissioner, for instance, threatened to defend Puerto Rico’s government “to the last drop of blood”. Police have claimed that the constitution no longer applies, and as NACLA reported:

started to forcibly remove people from the area, nearly causing a stampede.

Videos from 22 July suggest that the momentum nonetheless continues to grow:

Wow. Puerto Rico.
You don’t get this perspective from the ground.
They are Loud.
Determined.
United. pic.twitter.com/3JMmbc8NY2

US senator Bernie Sanders had already written a message of solidarity with the Puerto Ricans, joining the call for the governor to resign.

Congresswoman Alexandria Ocasio-Cortez, who comes from a Puerto Rican family, has also called for Rosselló’s resignation and for solidarity with protesters:

A remarkable testament to the creativity, resilience & power of the people of Puerto Rico.

Jet skis, horses, pots, pans, & body paint – this isn’t about people making something from nothing.

Until Rosselló resigns, meanwhile, it seems the protests are unlikely to wane.