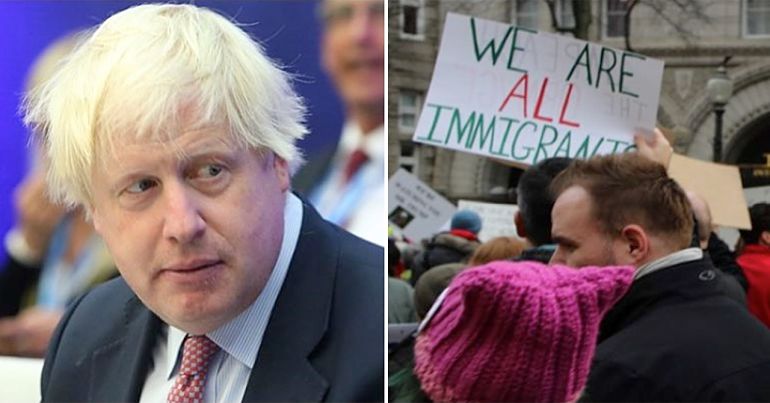 But these comments may be hearsay, so McInerney missed the opportunity to challenge more provable parts of Johnson’s record on race and immigration.

Nelson dismissed McInerney’s comments. And he said the notion of former Spectator editor Johnson being racist was “completely bizarre”. Nelson said Johnson is:

But not only do the “inherently racist” comments credited to Johnson demonstrate the opposite, so too do his written comments. Furthermore, Johnson’s support for an Australian style points-based immigration system demonstrates the immigration policy he “passionately” supports. So it’s worrying that McInerney didn’t challenge this.

As The Canary has reported, Johnson is alleged to have made derogatory comments about his so-called “European friends and partners”. These are the comments McInerney referred to as “inherently racist”. Johnson allegedly called French people “turds” and wondered why taoiseach Varadkar “isn’t called Murphy like all the rest of them?”

These comments prompted the SNP’s Ian Blackford to call Johnson a “racist”.

At a Tory leadership hustings on 5 July, Johnson demonstrated that he’s anything but “passionately pro-immigration”. He said he’d require all immigrants to the UK to learn English. And through repeated use of “they” and the word “waves”, maybe Johnson is revealing his true opinion about people who come to live in London (emphasis added):

waves have come to London and slowly they have changed, they have adapted, they have made their lives, and they’ve helped to make our national culture and they’ve bought into it. And that’s what I want for our country.

In June this year he said he favoured the UK adopting an immigration points system like in Australia. But studies show the points-based immigration system is both racially and gender biased. Furthermore, Amnesty International condemned Australia’s system as unsafe and “hellish”. Yet McInerney mentioned none of this.

Media must do its job

With Johnson in No. 10 and the final outcome of Brexit uncertain, UK immigration policy could be heading to a dark place. And as Johnson’s “inherently racist” comments may just be hearsay, it’s his policy that deserves the greatest attention.

With that gloomy prospect on the horizon, it’s even more important that all elements of the media do their job. We need to challenge and oppose racist comments and regressive immigration policy at every opportunity.