Like Arron Banks, a Tory radio show host is now having 'fun' mocking and taunting a teenager - Canary 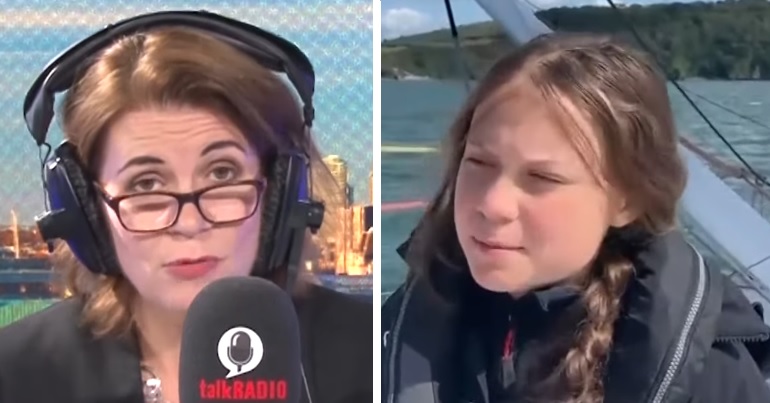 Arch-Brexiteer Arron Banks caused an uproar on 14 August for ‘joking’ about climate activist Greta Thunberg getting in a “freak yachting accident”. Clearly though, Britain’s right wing didn’t think that was enough offensive trolling for the 16-year-old in one day. Tory radio host Julia Hartley-Brewer stuck it to Thunberg too.

What is it in these knuckleheads that makes them think it’s ‘fun’ to mock this teenager?

Yet she also mocked Thunberg in a tweet the same day:

Hi Greta, I’ve just booked some long haul flights for my family to enjoy some winter sun on the beach this Christmas.

Level of guilt being felt: 0% pic.twitter.com/BVE3JyiNgi

She was asked about this apparent hypocrisy. Someone pointed out to Hartley-Brewer that people had said “exactly this” – that it’s inappropriate to make jibes at a young person –  in response to her own tweet. The radio host responded:

I mock her silly claims. That’s hardly the same thing.

Thunberg is, of course, known for her climate activism. She’s inspired the school strikes taking place around the world over the climate emergency:

Tomorrow we schoolstrike for the right to a future. In 1623 places in 119 countries around the world.
And counting!
Join us!
Everyone is needed. Find or register your closest strike at https://t.co/Fu0gVe3IOc
#fridaysforfuture #climatestrike #schoolstrike4climate pic.twitter.com/CDYlbsjfUi

And she has done so through not only taking direct action, but by taking the time and effort to learn about the crisis and share that information with others. She has, however, faced a lot of mockery and criticism from supposed ‘adults’. Hartley-Brewer and Banks are not the first to try and belittle her efforts and ideas.

But there’s always something ‘off’ about these attacks – not only in the fact they’re directed at a teenage. As Thunberg explained during a recent speech in France’s National Assembly:

A lot of people, a lot of politicians, business leaders, journalists, say they don’t agree with what we are saying. They say we children are exaggerating; that we are alarmists. To answer this I would like to refer to Page 108, Chapter 2 in the latest IPCC report…

Right there it says that if we are to have a 6% to 7% chance of limiting the global temperature rise to below 1.5 degrees, we had on January 1st 2018, 420 gigatons of carbon dioxide left in our CO2 budget… At current emissions levels that remaining budget is gone within roughly eight and a half years.

These numbers are as real as it gets, though a great number of scientists suggest that they are too generous, these are the ones that have been accepted by all nations through the IPCC. And not once, not one single time have I heard any politician, journalist, or business leader even mention these numbers.

It is almost like you don’t even know they exist.

Surely Thunberg’s critics do know these numbers exist, even if they’ve never bothered to sit down and actually examine them. And they’re not mentioned by her critics for one reason: because they prove she’s right.

So, as always with those who have no argument or substance, they avoid the actual matter at hand.

Thunberg has also previously said that the adults tasked to protect us on a national level, i.e., our ‘leaders’, are “behaving like children” over the climate crisis. So, she says, young people now “have to take the responsibility [our leaders] should have taken long ago”.

These childish and shameful tweets encapsulate this role reversal perfectly. Hartley-Brewer and Banks are behaving like children. They’re acting like they have no idea of the seriousness of the ecological emergency, and, instead, just think its a tool they can use for fun. In these particular instances, they’re essentially using it as a poker to merrily prod Thunberg with. Meanwhile, the 16-year-old is taking a two week long journey across the Atlantic ocean so she can make numerous speeches to the ‘grown-ups’ in the US, trying to get them to take the climate catastrophe seriously.

If there was ever a time when adults need to be actually mature, responsible beings, now is it.