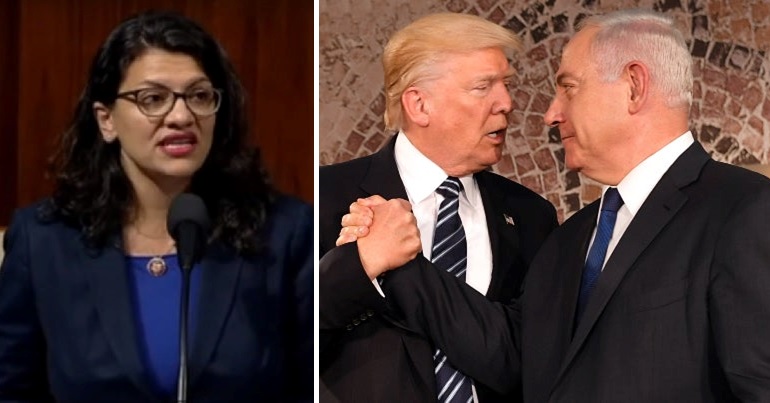 Israel met with strong criticism on 15 August for banning elected US politician Rashida Tlaib – the first ever Palestinian-American congresswoman – from visiting occupied Palestine. The occupying state then said it would consider allowing her to visit relatives if she promised “not to act to promote boycotts against Israel”. But as people in the US rushed to show solidarity with Tlaib, she insisted she would not “bow down to [Israel’s] oppressive & racist policies”:

Silencing me & treating me like a criminal is not what she wants for me. It would kill a piece of me. I have decided that visiting my grandmother under these oppressive conditions stands against everything I believe in–fighting against racism, oppression & injustice. https://t.co/z5t5j3qk4H

What Israel proposed to @RashidaTlaib was their age-old proposition: you can stay in your homeland as a humanitarian exception- without political rights- & on condition you surrender & cease to resist. Thank u Rashida for rejecting these terms and making it clear what is at stake https://t.co/ocLVlkawMX

Statement from @RashidaTlaib: “My family and I have cried together throughout this ordeal…It is with their strength and heart that I reiterate I am a duly elected United States Congresswoman and I will not allow the Israeli government to humiliate me and my family.” pic.twitter.com/EBlxbiU03h

Israel had previously barred Tlaib and fellow congresswoman Ilhan Omar from visiting East Jerusalem and the West Bank (i.e. Palestine, not Israel) over their support for the Palestinian-led Boycott, Divestment and Sanctions (BDS) movement. The US House of Representatives recently gave implicit justification to this Israeli policy by voting overwhelmingly to condemn the BDS movement. Only a small number of congress members opposed the resolution. Tlaib, meanwhile, put all of the resolution’s backers to shame with a powerful statement in defence of free speech.

For many people, Israel’s position came as no surprise:

My grandparents fled to Palestine in 1936 as refugees. I have Israeli citizenship. Half of my family lives in Israel. My parents met & got married in Israel.

In the same breath, I can also say that Israel is an ethnonationalist apartheid state.

If I can do that, you can too.

Trump: SEND HER BACK
Israel: Sorry Palestinians aren’t allowed back

Since becoming US president, Trump has worn his pro-Israel bias on his sleeve shamelessly. He controversially recognised Jerusalem as Israel’s capital city. He moved the US embassy there. And he sparked outrage around the world for doing so.

Trump has also called for official recognition of Israel’s authority over stolen Syrian land. And he has formed a close relationship with Israeli prime minister Benjamin Netanyahu; the man who oversaw Israel’s war crimes during its 2014 attack on Gaza (the one that reportedly killed at least 1,483 Palestinian civilians).

All of that is despite the US being fully aware of Israel’s crimes. Since 2000, for example, Israeli armed forces or settlers have reportedly killed over 2,000 Palestinian children.

Trump has also used Israel as an excuse for spewing racist bile against elected US politicians who oppose him. And this week, he openly encouraged Israel to ban Tlaib and Omar from visiting occupied Palestine:

The President of the United States is joining with a foreign government to punish duly elected representatives of the people to quash their dissent and prevent them from doing their job. This is shameful on his part and on the part of the Israeli government. https://t.co/nBb3vAdGAx

So youre only allowed into Israel if Trump says so…
Even if youre a United States representative.
And why on earth wouldnt Israel want two 'not in their pocket' reps to see the West Bank? https://t.co/HmA4TVICBO

All progressives must stand up and be counted

Fortunately, Tlaib and Omar are not alone. And numerous progressives have stood alongside them in solidarity while slamming Israel’s travel ban:

We call on other members of Congress to join her and refuse to travel to Israel until the government reverses their decision and allows @RashidaTlaib and @IlhanMN to enter. https://t.co/4MVvM6AuCJ

If Prime Minister @Netanyahu doesn't want members of Congress to visit Israel, then maybe he can respectfully decline $3.8 billion in annual funding—the largest amount of U.S. aid to any country.

I believe in an even-handed approach to ending the Israeli-Palestinian conflict. https://t.co/GGVHi8pzSk

It is disgusting that a bigot like Trump is attacking @RashidaTlaib and @IlhanMN in this way. Opposing Netanyahu's policies is not “hating the Jewish people.” We must stand together against those who promote hatred and racism in Israel, Palestine, the U.S. and everywhere. https://t.co/Sq8FikcumK

Anti-Semitism is not some abstract idea to me. It is very personal. It destroyed a good part of my family. I absolutely reject Trump's disgusting efforts to exploit fear of anti-Semitism to attack my colleagues. pic.twitter.com/IwpSmxcnHF

It’s disgraceful that Netanyahu is denying @IlhanMN & @RashidaTlaib access to Israel due to their political views.

This isn’t a partisan issue. When a nation blocks a member of Congress from entering their borders, they are insulting the American people. https://t.co/FUJAH2t8mJ

Israel doesn't advance its case as a tolerant democracy or unwavering US ally by barring elected members of Congress from visiting because of their political views. This would be a shameful, unprecedented move. I urge Israel’s government to allow @IlhanMN and @RashidaTlaib entry.

I’m calling this like I see it: bigoted, short sighted and cruel. Any leader committed to advancing democracy would welcome with open arms two democratically elected United States Congresswomen. And every single member of Congress should be calling this out. https://t.co/Ydn3KQLofn

However, one Jewish Voice for Peace activist has stressed that progressives shouldn’t let the Democratic Party establishment off the hook. She argued that Democratic elites have failed miserably at holding Israel to account for its crimes. She also pointed out that:

"The Democrats' absolute inability to hold Israel accountable for any of its human rights violations is what has allowed it to continue to increase, with impunity, its repressive policies," @RVilkomerson of @jvplive says of Israel barring entry to @Ilhan and @rashidatlaib. pic.twitter.com/i8uxfNx7Db

Trump and Netanyahu are very much part of a violent, racist, elitist alliance that is gaining strength around the world. And liberal centrists – like those still at the helm of the Democratic Party – are clearly hindering the fight against that toxic, hard-right alliance. Tlaib and her progressive supporters, on the other hand, are at the forefront of the resistance. So they deserve all the support we can give them.