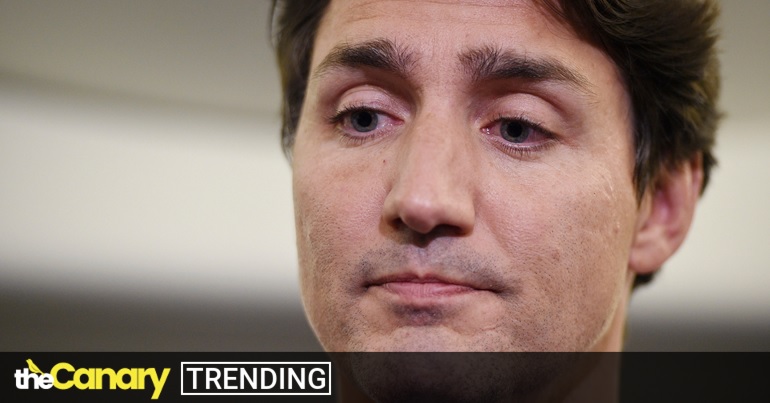 Canadian prime minister Justin Trudeau’s campaign is facing a growing scandal after a yearbook photo surfaced of him in ‘brownface‘ make-up at a 2001 costume party and two other similar incidents also came to light. With Canada’s election just a month away, this could be devastating for Liberal sweetheart Trudeau.

Time magazine published the photo on Wednesday, saying it was taken from the yearbook from the West Point Grey Academy, a private school in British Columbia where Trudeau worked as a teacher before entering politics. It shows the then 29-year-old Trudeau in a turban and robe with dark make-up on his hands, face and neck.

Trudeau, who launched his re-election campaign a week ago, also revealed that this was not the first time he darkened his face. He said he once did it while performing a version of Harry Belafonte’s Banana Boat Song (Day-O) during a talent show.

“I should have known better then, but I didn’t, and I am deeply sorry for it,” Trudeau said.

Global News also reported on a third instance, broadcasting a brief video of Trudeau in blackface while raising his hands in the air and sticking out his tongue. A spokeswoman for Trudeau’s Liberal Party said the footage was from the early 1990s. The Canadian TV network said it was not clear where the tape was made.

This could all spell more trouble for Trudeau, who polls say is facing a serious challenge on October 21 from Conservative leader Andrew Scheer.

Liberals around the world have admired Trudeau’s apparently pro-diversity policies in the Trump era, with Canada accepting more refugees than the US. His government has also legalised cannabis.

However, the 47-year-old son of late prime minister Pierre Trudeau was already vulnerable following one of the biggest scandals in Canadian political history, which arose when Trudeau’s former attorney general said he improperly pressured her to halt the prosecution of a company in Quebec. Trudeau has said he was standing up for jobs, but the scandal rocked the government and led to resignations and a drop in his ratings earlier this year.

His opponents on the left, meanwhile, have responded firmly to the ‘brownface’ scandal. New Democrat leader Jagmeet Singh, for example, said:

I am deeply troubled by what this means to Canada. Young kids are not just going to see just one or two but multiple images of the prime minister mocking their lived reality… This is so hurtful to so many Canadians.

Jagmeet Singh says growing up he fought back against racists, but people who don't have that ability will be hurt by Trudeau's brownface incident: 'It's going to hurt to see this. It's going to hurt them a lot."#cdnpoli pic.twitter.com/j7Rt2PbpUs

This is maybe the most centered and truthful statement about Trudeau "Brownface" picture. This is Canada. This are our true values. #jagmeetsingh https://t.co/QhIYDbl4GG

I am deeply shocked by the racism shown in the photograph of Justin Trudeau. He must apologize for the harm done and commit to learning and appreciating the requirement to model social justice leadership at all levels of government. In this matter he has failed.

Hope for the Canadian left?

Many on the left see Trudeau for what he is – a corporate stooge with a progressive mask. And workers showed that earlier this month during a Labour Day parade:

According to local sources, transit workers and postal workers who were ahead of the PM in the parade turned backward to protest Trudeau with some members of the parade chanting "Justin Trudeau, Andrew Scheer, same old bullshit, different year."https://t.co/q98j1AASO3

At the Labour Day parade in Hamilton Ontario, Justin Trudeau was jeered by workers who feel he had no place there. Those workers were right to stand up to Trudeau and his disingenuous support for working people #elxn43 https://t.co/f3APH5RAZr

Labour activists & workers are the backbone of the Cdn economy

Today, they booed Justin Trudeau out of the Labour Day Parade

Because, it's time to reject a govt on the side of Corporations

And, it's time for a govt on Your Side with Jagmeet Singh & the NDP#cdnpoli #canlab pic.twitter.com/xnX9SLrLua

Under Trudeau’s watch, Canadian authorities have invaded Indigenous people’s land in defence of a gas pipeline. And just a day after declaring a ‘climate emergency’, his government approved a huge pipeline project:

This is just so perfectly Trudeau, King of Gesture Politics. Declares a "climate emergency" one day, approves a massive tar sands pipeline the next. All symbol, no substance, no matter the stakes. This will not stand. https://t.co/aWjaXaPYfW

Trudeau has also thrown Palestinians living under violent Israeli occupation under the bus by attacking the Boycott, Divestment and Sanctions (BDS) movement.

The alternatives to Trudeau on the left are Singh’s NDP and May’s Greens. They are currently battling for third place, but have some very attractive proposals:

This #elxn43 is about choices.

For PM Trudeau that means spending billions on fossil fuel subsidies while spending less than Harper's Conservatives as a % of GDP on housing.

Today in #OttawaCentre we recommitted to building 500,000 units of quality affordable housing across 🇨🇦. pic.twitter.com/AvllhfcH0y

People in #OttawaCentre know very well that 4 years of a Trudeau Liberal government haven't made life any easier, while things for the ultra-rich are better than ever.

We don't work for the powerful, we work for people – and that's what you get with New Democrats. #elxn43 pic.twitter.com/pX1U2k4oKS

Jagmeet Singh may not be a socialist, but he’s much better than Trudeau or Scheer. #ImWithSingh #FreeKashmir pic.twitter.com/AfuhH7QslP

The Greens, meanwhile, are campaigning on “transitioning Canada to a green economy while also lifting Canadians out of poverty, abolishing tuition fees and bringing in national pharmacare”. And there are suggestions that concern in Canada over the global climate crisis may be a priority for many voters:

Either way, Trudeau is not an option for true progressives. Because he’s very much a wolf in sheep’s clothing. And with the current ‘brownface’ scandal, it looks like his mask has finally slipped.