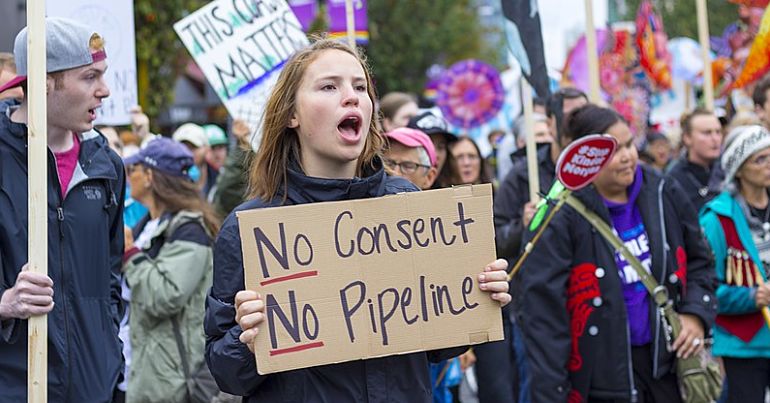 Just one day after declaring a ‘climate emergency’, Justin Trudeau’s Liberal government in Canada has approved a massive pipeline project. And the decision has provoked major uproar worldwide.

The Canadian government argues that the project will allow Canada to reduce dependence on US oil and export to markets via the Pacific Coast. The project, however, has been met with fierce opposition from both First Nations indigenous groups and environmental campaigns.

In August 2018, First Nations groups in Canada won a historic victory in the Canadian Federal Court of Appeal by temporarily quashing the project. They argued that they were not properly consulted about the future impact of the project and that it would “push Canada’s climate change goals out of reach”. The court found that “there was no meaningful two-way dialogue” between First Nations communities and the government, as required by the Canadian constitution.

The court put the project for review, and on 18 June Canada once again gave it the go-ahead. Trudeau claims revenues from the project will fund a “transition to a green economy”.

Global leaders paid lip service to Thunberg’s concerns, with many recently declaring a ‘climate emergency’ in response to the global climate breakdown.

Unsurprisingly, then, Trudeau’s decision to approve the Trans Mountain expansion project just one day after declaring a ‘climate emergency’ in Canada caused global outrage. Thunberg herself called the move “shameful”:

One second they declare a #ClimateEmergency and the next second they say yes to expand a pipeline.

This is shameful.
But of course this is not only in Canada, we can unfortunately see the same pattern everywhere…https://t.co/zVbWXnLBSQ

This is just so perfectly Trudeau, King of Gesture Politics. Declares a "climate emergency" one day, approves a massive tar sands pipeline the next. All symbol, no substance, no matter the stakes. This will not stand. https://t.co/aWjaXaPYfW

Indeed, not long after shedding tears for Canada’s historic mistreatment of First Nations groups, Trudeau sent state forces onto their land to defend a gas pipeline in January 2019.

Today, though, we’re not only talking about genocide, but omnicide: the mass extinction of every living organism. And for this crime, there may soon be no organised life remaining to judge or be judged.