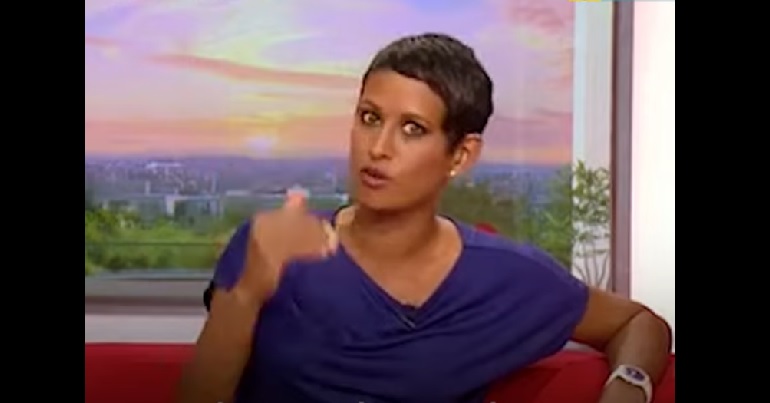 The BBC has come under fire for reprimanding presenter Naga Munchetty because she described remarks made by Donald Trump as racist. The broadcaster has said that Munchetty’s stance on Trump breached their guidelines on impartiality.

Many prominent journalists have signed an open letter condemning the BBC‘s decision. In the wake of this controversy, the BBC‘s approach to reporting on racism has come into question. BBC executives have since issued a response to say that they are “not impartial on racism”. Still, this controversy tells us a lot about how we understand and approach racism in general in the UK today.

There has already been much discussion around impartiality at the BBC, and the irony of censoring a Woman of Colour for her views on racism. What’s noteworthy, however, is the broader context in which this debate has taken place. I want to refer to what Munchetty actually said that the BBC found worthy of reprimand:

every time I have been told as a Woman of Colour to go home, to go back to where I came from, that was embedded in racism. Now I’m not accusing anyone of anything here, but you know what certain phrases mean.

During the discussion in question, Munchetty did in fact, more than once, say she didn’t want to share her opinion on Trump himself. So why the reprimand?

Yes, at times, the BBC does seem to have clear double standards when it comes to implementing impartiality, but it goes beyond that. One of the key issues here is the general discomfort, particularly for powerful white people, evoked by the term ‘racist’. This discomfort, which can also be described as white fragility, is owed in large part to the fact that people today, in what we would like to describe as a ‘post-racial’ society, find the accusation of racism more unacceptable than racism itself.

We can repeatedly witness someone saying racist things, but the second we ascribe racism to the individual who said them, the discussion is derailed. It then stops being about racism altogether. It is no longer about the fundamental injustice of racism or how it impacts the people it affects. Instead, the discussion becomes centred around the feelings of those who insist that they are not racist.

Who can we call racist?

In popular discourse today, we have developed a distinction between someone ‘doing something racist’ and describing them as ‘a racist’. This distinction isn’t limited to the media but can be witnessed in many spheres including politics, academia, schools, workplaces, etc. We see it online as well as in real life. And it explains, in part, why we are where we are today with the BBC‘s stance on Munchetty.

It explains how people like Donald Trump, Boris Johnson, or even the liberal Justin Trudeau, can repeatedly ‘do racism’ without ‘being racist’ themselves. The distinction is, of course, both absurd and pointless. It’s resulted in the label ‘a racist’ now having an impossibly high burden of proof. It’s almost as though calling someone ‘a racist’ is only justified when they flash swastikas or wear white pointy hats.

We need to realise that racism isn’t an abstract concept, but a reality that people are responsible for creating. Whether it’s one-off microaggressions, discrimination, or sustained hatred, it’s all done by people who are racist to varying degrees. But the stigma attached to the label ‘racist’ seems to have superseded all concern for racism itself, and for the pervasive, traumatising effects of racism on those who experience it. So we can talk about racism, but only as long as we don’t say someone is actually being racist. And this has become a way to shift the focus away from victims of racism and towards the feelings of its perpetrators.

Why diversity and inclusion matters

Perhaps what’s most worrying about the entire situation is the realisation that our national broadcaster has such a poor understanding of racism and how it functions. The reprimand against Munchetty must be seen within the context of the BBC consistently giving a platform to far-right views. I wonder if the BBC realises that by being so weak on challenging racism, it could be enabling racist and fascist ideas. What’s more, it has decided to discourage staff from protesting against the ruling on Munchetty.

In response to the backlash, the BBC has said: “diversity matters hugely”. However, when we talk about diversity in the media, we must acknowledge that it’s about more than representation. It’s about actually allowing marginalised groups to have a voice, and taking their concerns seriously. The BBC, along with other mainstream media in the UK, has protected the establishment for far too long. In doing so, while also airing far-right views without sufficiently challenging them, it continues to disregard the risk its reporting creates in the lives of marginalised people.