Fascism is now. Why we need to stop giving people like Steve Bannon a platform to air their views. - Canary 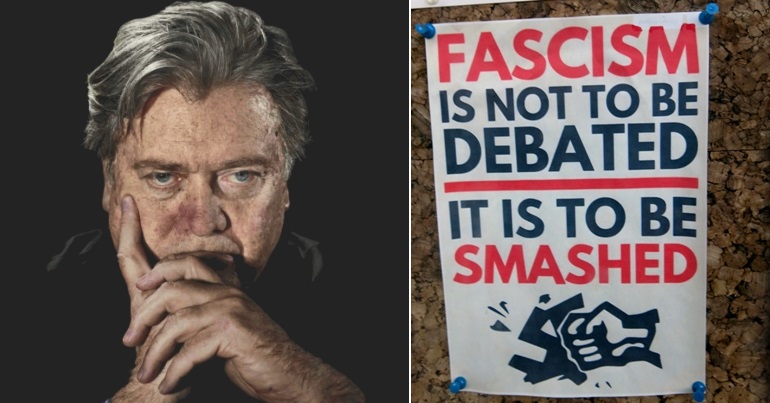 It looks like 2018 has been a good year for the ‘marketplace of ideas’. Steve Bannon was interviewed on BBC Newsnight in May. In October, Stephen Yaxley-Lennon, aka Tommy Robinson, got a Sky News interview as well as an appearance on the BBC. And on 15 November, Oxford Union gave Bannon a platform yet again, amid much protest.

The union is certainly no stranger to inviting far-right personalities. Earlier this month, German far-right politician Alice Weidel declined an invitation to speak there citing ‘security concerns’. It also hosted Yaxley-Lennon in 2014 as well as far-right politician Marine Le Pen in 2015. Video recordings of both events are still available to watch on the union’s YouTube channel.

The right to speak

On its Twitter page, Oxford Union – a paid, members-only debating society at Oxford University – proudly calls itself the “last bastion of free speech”. Stephen Horvath, the president of Oxford Union, defended the invitation to Bannon by saying “it is only through listening to the opinions of others that we can fully understand those opinions”. When RT covered the protests that took place outside the event, a student similarly said “I despise what [Bannon] stands for, but I believe we have to give people a right to speak”.

But if an institution such as Oxford Union refuses to invite Bannon, is that really affecting his right to speak? Of course not. Because people like Bannon already have a dedicated following and an established audience. They have enough influence not to need a prestigious stage from which to share their views. As for claiming we need to listen to his opinions to “fully understand” them, I can’t say I’ve heard anything more insulting in recent memory. I don’t need to see Bannon at one of the most respected universities in the world to understand that equating anti-fascism and Black Lives Matter activists with the KKK is an indefensible position.

Personally, I have lost count of the number of times it has already been argued that free speech is being hijacked under the guise of hearing everyone out, while empowering the privileged few. It is no coincidence that the people whose right to speak is publicly defended are invariably white, and already command enough influence to not need a platform to further their agenda. Some have suggested that the union’s decision to host ‘controversial’ personalities is more for their entertainment value, for the buzz it creates, rather than a genuine commitment to free speech.

What is really frustrating, however, is the reckless abandon with which these people claim to defend free speech while completely removing it from its real-world implications. Aleksandar Hemon, in an article written in response to the news that Bannon might headline the 2018 New Yorker literary festival, says:

Only those safe from fascism and its practices are likely to think that there might be a benefit in exchanging ideas with fascists.

Hemon describes how witnessing the rise of fascism in Serbia meant he could not bring himself to see ideologies such as Bannon’s as mere ‘ideas’. Rather, fascism always has violent real-life consequences. The Nazi salutes witnessed at the protests outside Bannon’s event are an ominous sign of this reality. The swastika found painted on a sports centre in Oxford just days later, even more so.

The reality is that we are on the verge of fascism right now. And by debating fascism as though it were an abstract concept, we aren’t just blinding ourselves to this reality. We are normalising and enabling it. We see it in May’s hostile environment and Trump’s dehumanisation of immigrants and refugees. And debating it won’t help anyone – what we need is to crush it completely.