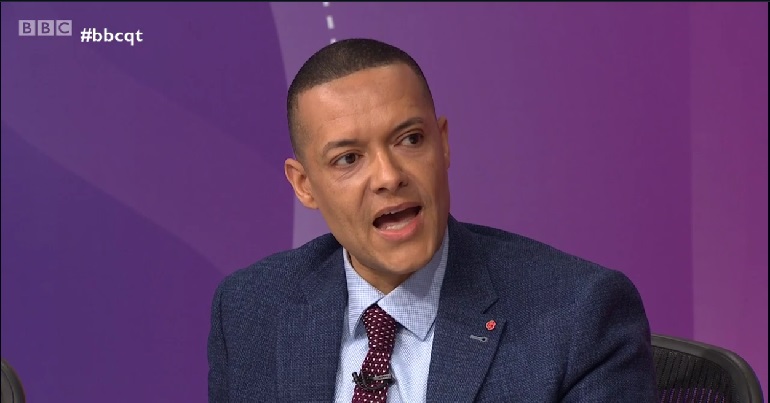 Another week, another blow for the government. After being condemned last week by the United Nations (UN), the government’s record on homelessness just got exposed in a big way.

Labour MP Clive Lewis slammed the Conservative Party on BBC‘s Question Time for failing to tackle homelessness and poverty in the UK.

One in two hundred Britons sleeping rough or in temporary accommodation

On the show, the panel was asked:

one in two hundred Britons are sleeping rough or in temporary accommodation – how has this been allowed to happen?

After hearing from Conservative MP Karen Bradley, Lewis laid into the government for its record:

He then went on to talk about the impact of austerity on his constituency in Norwich:

In my own city, I went to visit the prison service. And the prison governor is handing prisoners backpacks – homelessness backpacks – so that they can sleep on the streets.

And he continued by also laying into the government’s policy decisions and their links to homelessness and poverty:

We’ve got 5,380 social homes that were completed last year, and a waiting list for council houses of 1.2 million. And that is on the watch of this Conservative government.

You say that there was no choice. Austerity was a political choice. You’ve given 110 billion pounds away in corporate tax cuts to the largest, wealthiest corporations. And yet at the same time, you now have a UN report saying that there are millions of people who are destitute – 1.5 million. It’s a disgrace. It’s a scandal. And you can not fob it off on eight years ago for a financial crash that hit the entire globe.

You can watch Lewis’ contribution in full here:

But Lewis wasn’t alone in slamming the government on the show. In fact, members of the audience called out the government’s record too.

One member of the audience also gave a blistering attack on the “harsh” and “inhumane” austerity policies of the Conservatives:

‘This has been a problem ever since this government got in power’
This audience member says that the government’s policy of austerity has been a major contributor to the problem of homelessness. #bbcqt pic.twitter.com/XGhKGY6ZAI

Another audience member then drew links between inadequate mental health services and rising homelessness. They laid some of the blame on:

More and more people are calling out the government’s record on homelessness and poverty. And in the wake of the UN’s damning report, it’s high time it changed tack.