As the Brexit crisis deepens, UKIP has gone to war. With itself. - Canary 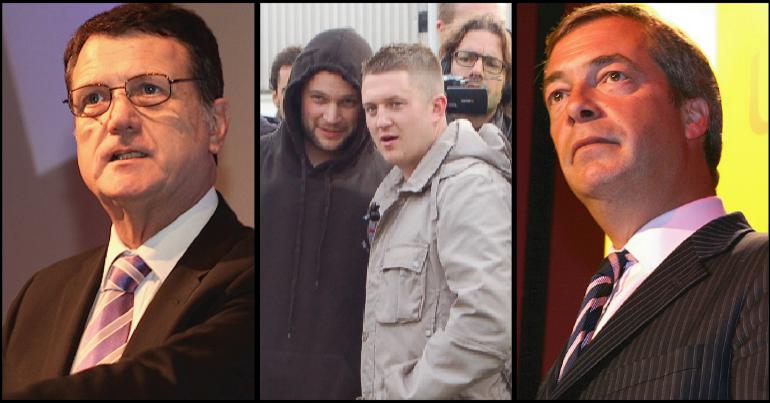 Theresa May’s Brexit plan has created a national crisis. With the deal on the table angering both Leavers and Remainers, it seems like the ideal situation for UKIP to capitalise on. Instead, the party looks like it may be going to war with itself over the appointment of Stephen Yaxley-Lennon (aka Tommy Robinson).

The current UKIP leader Gerard Batten has been supporting Yaxley-Lennon for a while. He’s referred to him as an “incredibly brave man”, and called for him to be allowed into the party. What prevented this was UKIP’s ban on former English Defence League (EDL) members joining. Yaxley-Lennon was no mere member, either; he was actually one of the EDL’s founders.

Batten has now brought Yaxley-Lennon on as an advisor on “rape gangs and prison reform”. The UKIP leader described him as having “great knowledge” on these subjects. Yaxley-Lennon was imprisoned earlier this year following an incident which allegedly could have risked the mistrial of a child grooming gang.

I’m appalled. Gerard Batten has this sort of fixation with Tommy Robinson and discussing Islam and dragging Ukip into the direction of effectively being a street activist party…

He didn’t hold back on what’s happening next:

We are going to have one last go of getting rid of a leader who is dragging us in a shameful direction.

I’m going to fight and save it [UKIP] but if it carries on going in this direction, electorally it is finished.

Farage wasn’t the only person with something to say, either.

I share the concerns and objections voiced by Nigel Farage to the involvement of Tommy Robinson in UKIP at the invitation of Gerard Batten and so do the vast majority of longstanding UKIP members that I know. This issue is coming to a head very quickly now.

His party may be divided on the Yaxley-Lennon issue, but people replying to O’Flynn seem to largely favour the former EDL leader joining: 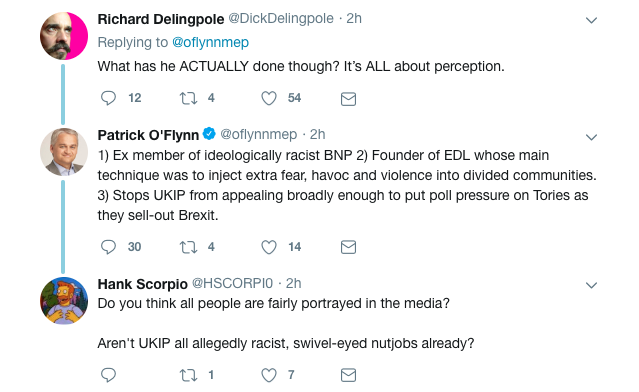 UKIP’s Suzanne Evans, who’s sparred with Farage before, pointed out hypocrisy on his part:

I would be interested to know if @Nigel_Farage now regrets his own appointment of Raheem Kassam as a trusted senior advisor, not to mention backing him for our party leadership, seeing as he too is one of Tommy Robinson’s greatest champions?

Raheem Kassam used to run Breitbart‘s London bureau. He was brought on by Steve Bannon, who also has links to Farage. Bannon is another person who’s spoken favourably of Yaxley-Lennon.

Others pointed out Farage’s hypocrisy:

all very well for @Nigel_Farage to repudiate UKIP links with Tommy Robinson, but Farage’s right-hand man at UKIP, @RaheemKassam has been one of Robinson’s biggest cheerleaders for years. You sleep with dogs Nigel, you get fleas.

Rank hypocrisy of Nigel Farage condemning UKIP for appointing Tommy Robinson when he spoke at AfD rally in Germany, a neoNazi party that won seats by playing on migrant fears…

Others pointed to the hypocrisy of Yaxley-Lennon’s appointment, asking:

And some think the move signifies that UKIP should no longer be treated as a legitimate political entity:

Leanne is right: anywhere UKIP sits in elected institutions and by broadcasters – it should be treated like Golden Dawn. Walk out when they speak. https://t.co/drZAEYhVwx

Although UKIP taking Yaxley-Lennon on board is an unwelcome development, it isn’t an unexpected one. The links between him and people like Farage are clear, so it’s difficult to believe keeping Yaxley-Lennon out has been anything other than strategy to appear electable.

Good strategy is the last thing anyone would accuse UKIP of these days. That’s why we could see them losing another leader just as they had chance to capitalise on Britain’s mess of a political situation.