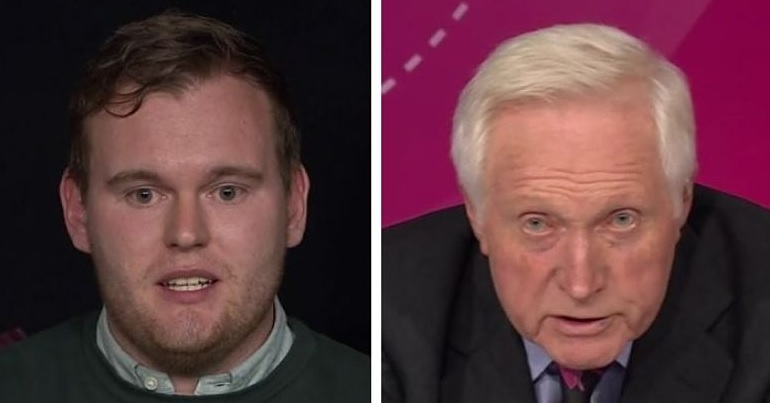 A Question Time audience member made a powerful observation on 22 November. And it unwittingly forced David Dimbleby to ask a damning question about the Conservative government.

During the BBC‘s flagship show, someone asked a question about the UK’s homelessness crisis. As the audience member said, “One in 200 Britons are sleeping rough or in temporary accommodation”. Some members of the mainly right-wing panel responded by arguing that solutions lie with councils. Or by effectively saying ‘it’s complicated’. But then another audience member spoke. He said:

In every answer so far we’ve had somebody mentions councils and the work that councils could do in order to help homelessness… It’s quite clear what the problem is here, chronic underfunding of public services and our local authorities…

This has been a problem ever since this government got in power started forward with its harsh and inhumane policy of austerity, as the UN pointed out this week. Now if actual money was put into our public services, maybe this issue wouldn’t have got as bad as it has.

Not only was this comment insightful, it was striking. Because in the 50-odd minutes leading up to it, no-one mentioned the UN’s recent assessment of the UK at all. This reflects terribly on the BBC and, indeed, the British media in general.

‘This has been a problem ever since this government got in power’
This audience member says that the government’s policy of austerity has been a major contributor to the problem of homelessness. #bbcqt pic.twitter.com/XGhKGY6ZAI

Philip Alston, special rapporteur on extreme poverty and human rights for the United Nations, held a press conference on 16 November. In it he relayed findings of a UN investigation into the impact of Britain’s austerity measures. That investigation should be devastating to the current government. Because Alston accused it of turning the UK into a country akin to one dealing with “a natural disaster or health epidemic”; continuing with hurtful policies that it could change “overnight, and for very little money”; and doing so out of “political choice” rather than necessity. As Alston said, the Conservative government has fundamentally transformed Britain into a country where:

If it weren’t for this audience member, however, it doesn’t appear the investigation would have featured on Question Time. Of course, it’s possible the BBC didn’t receive a question from the audience on the issue. If so, that’s an awful indictment of the UK media’s failure to give this investigation the prominence it deserves. But the question forced Dimbleby’s attention to the findings. He asked Northern Ireland secretary Karen Bradley:

The Conservative government really couldn’t have hoped for anything better. The UN reveals that austerity has led millions into poverty, which it says “is not just a disgrace, but a social calamity and an economic disaster, all rolled into one”. But the British public only hears about it on the BBC‘s flagship programme after a clued-up audience member manages to get Dimbleby to ask a question about it.

Shame on the BBC, and shame on this country’s media.