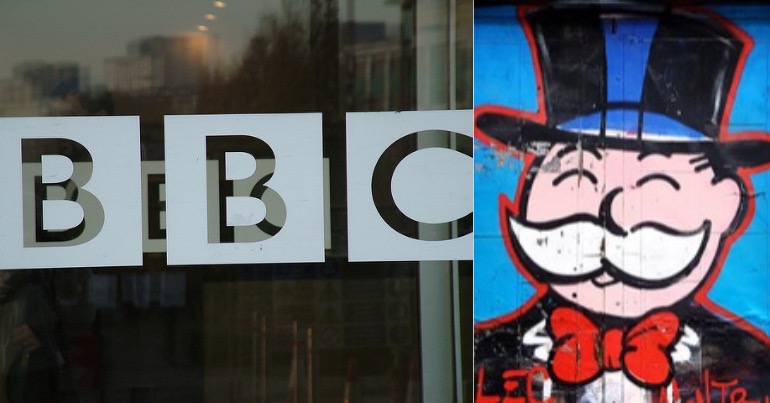 On BBC Question Time (BBCQT) on 22 November, the BBC yet again demonstrated favouritism to the voices of big business over those of ordinary working people.

The panel included a Tory minister, a right-wing tabloid journalist, two members of the business community, and then Labour left-winger Clive Lewis.

From the world of business came Brexiteer Richard Walker, who took over the role of managing director of Iceland from his father Sir Malcolm Walker (who has publicly supported and funded the Tories).

Also included was Trevor Phillips, whom the BBC described innocuously as a “broadcaster”, but who was until recently president of the John Lewis Partnership.

But absent from the panel were representatives of workers, union or otherwise. And Labour’s Clive Lewis surely cannot be a sufficient counterweight to a Tory minister, a right-wing journalist, a Tory-supporting business, and a former business representative.

People may respond by pointing out the positive work Iceland has done in plastic reduction, or their recent banned advert campaigning against the devastation caused by the palm-oil industry.

Meanwhile, people might acknowledge Trevor Phillips’s former position as a Labour representative on the London general assembly, or as chair for both the UK Equality and Human Rights Commission and the Commission for Racial Equality; or that, even though Phillips comes from business, the John Lewis Partnership is worker-friendly and employee-owned.

But both remain voices of the business community, whether framed as benevolent capitalists or not. And in a country of nearly 67 million people, there should be a greater range of opinion debating issues that affect all citizens.

This isn’t just a one-off occurrence, though. Because there’s a consistent saturation of business representatives in BBC coverage.

Mike Berry of Cardiff University has documented this. He found that:

And when examining the BBC Six O’Clock News alone, he noted:

business representatives outnumbered trade union spokespersons by more than five to one (11 vs 2) in 2007 and by 19 to one in 2012.

As Berry suggests, during critical moments in British economic history, this imbalance has skewed the public policy debate in favour of business-friendly solutions.

For example, Berry notes how, during the most recent financial crisis:

The table below shows the sources featured during the intense six weeks of coverage following the collapse of Lehman Brothers. 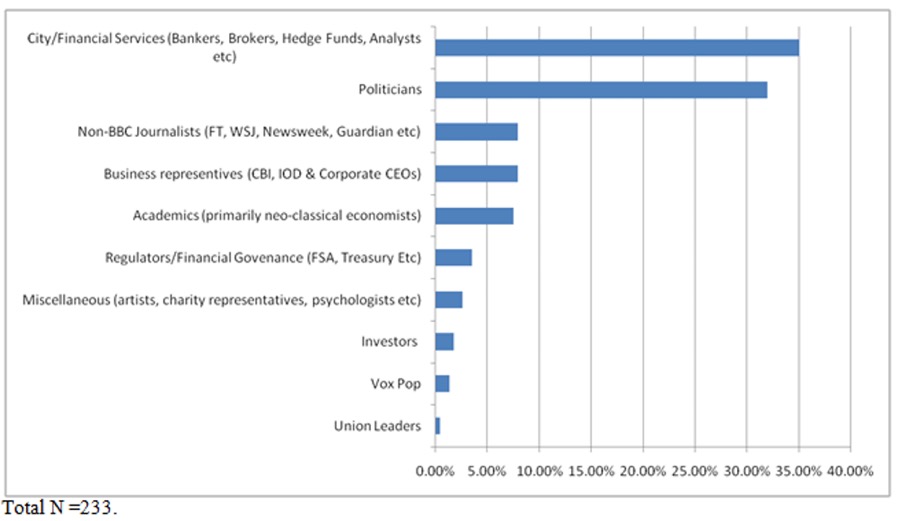 Note that union voices commenting on the crisis are virtually non-existent relative to business and financial-sector representatives – many of whom arguably caused the crisis.

Considering the impact of the issues on the UK workforce, and the fact that trade unions represent the largest mass democratic organisations in civil society, such invisibility raises troubling questions for a public service broadcaster committed to impartial and balanced coverage.

Dr Tom Mills of Aston University argues along similar lines in his own research, believing that the general trend in BBC coverage is:

towards the interests and perspectives of powerful groups in society, especially those in Westminster, Whitehall and the City.

The BBC routinely allows politicians, political commentators and business elites to define the political and social agenda. This has arguably played some role in bringing us to the current political and constitutional crisis in which we now find ourselves.

The Canary contacted the BBC for comment but it had not replied by the time of publication.

The BBC needs a revolution

The weighting of BBCQT panels seems to fit in with a wider pattern of bias towards the business establishment, as the 22 November edition demonstrated.

It is difficult for the public to make informed decisions if it does not receive a variety of opinions. And unfortunately, that is the case today, with the mainstream media bombarding us with the opinions of one privileged community and sharing just a narrow ideological perspective.

It’s time we radically reformed and democratised the BBC.