Instead of trying to woo Tory voters, Jo Swinson should be getting behind Corbyn - Canary 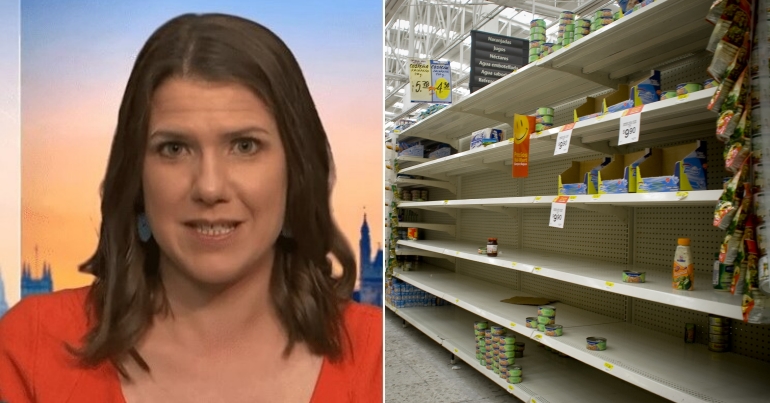 The Lib Dems are refusing to back Jeremy Corbyn as caretaker prime minister in an alternative to Boris Johnson’s government. And should they stick to that position they’ll be remembered as the party that brought no-deal catastrophe and further austerity suffering to the UK. Clearly, this is something the British people will never forgive them for. Particularly when they realise the Lib Dems are putting their own political interests ahead of the British people.

Why we need an alternative government

As Johnson’s hard-right Conservative and DUP minority government appeared ready for a no-deal Brexit, opposition MPs decided to act. And in doing so, they supported the EU Withdrawal (No.2) Act, known as the Benn Act.

The Benn Act requires that:

But if Johnson decides to ignore the Benn Act, a caretaker government would become necessary.

If that government is necessary and the Lib Dems maintain their hard-line opposition to Corbyn, they’ll be remembered as the party that brought catastrophe to the UK. Such catastrophe could lead to shortages in food, medicine, and fuel as well as civil unrest. Jo Swinson would then go down in UK history as the politician who allowed all this to happen. So it seems quite an irrational position for her to take.

Lib Dem MP Chuka Umunna attempted to show that Corbyn didn’t have the numbers to become caretaker prime minister. But he was quickly reminded of the Lib Dems’ responsibility:

If we look a little closer, it appears as if Swinson’s motives are in fact much more self-interested. Because it could be part of her strategy to take Tory seats at the next election. So, rejecting Corbyn might be an attempt to woo those Tory voters. After all, Swinson believes she can do the impossible at the next election.

Swinson gets called out

Labour MP Jon Trickett called her out on this:

Swinson's LibDems put more effort into preventing a socialist interim-Prime Minister than preventing no deal. This is not surprising- their top 100 target seats are largely Tory, and in the last election they did not win a single seat from Labour. 1/2https://t.co/flbSWtJ7lm

And other people were quick to express their disgust and bewilderment:

Well they did help the Tories screw the poor and disabled , bunch of opportunists

And some reminded us of what Swinson stands for:

Another person highlighted a more recent uncomfortable truth for Swinson:

They won’t get away with this

People are on to the Lib Dems, so they won’t get away with sacrificing the British people for their own political ends. In any case, the Lib Dems have been on a downward spiral since 2005. And the number of pro-austerity Tory defections to Swinson’s party, with a record of austerity, only underlines this.

So the choice is simple for Swinson and her party: back Corbyn and the British people or go down in history as the party that let the hard right bring chaos to the UK.