We need to force the government to end all arms deals with Turkey, not just some - Canary 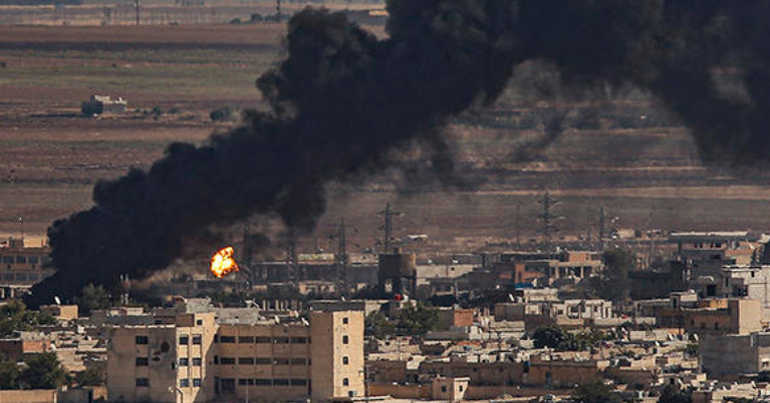 On Tuesday 15 October, the British government suspended new arms sales to Turkey over its invasion of northern Syria.

Foreign secretary Dominic Raab announced that no more export licences would be granted “for items that might be used in military operations in Syria” until a review takes place.

But Raab’s announcement made no mention of the UK-based companies who have already been approved licences. These existing licences mean that UK-based companies can continue exporting military equipment for use by Turkey in its invasion.

The Turkish invasion, which began on 9 October, is intended to crush the revolutionary movement in Rojava. Rojava’s revolution is based on women’s freedom, direct democracy, and a collective ecological society.

At least 78 civilians have been killed by Turkey and its jihadist proxy forces since last week, and 70,000 children have been made homeless.

This video by Rojava Information Centre, made before the invasion, analyses Turkey’s objectives:

Despite the tough rhetoric, this announcement does not go nearly far enough. It only applies to future sales, so will not affect the hundreds of millions of pounds worth of weapons that have already been licensed to Turkish forces over recent years. Those weapons can still be exported to Turkey, and can still be used.
These arms sales should never have been allowed in the first place, which is why, to be more meaningful, this must mark a change in policy. Things cannot simply go back to ‘business as usual’ once the war is out of the headlines. UK companies should not be profiteering from the crackdown in Turkey or the appalling repression of Kurdish people.

‘We need to keep the pressure on’

The Canary asked Berivan Qereçox, a British internationalist currently in Rojava, what she thought of the announcement. She told us:

When the British government announced that they were suspending future arms licences to Turkey… this was in response to the huge amount of public pressure. It was a success for the actions that have been taken. And it was, if nothing else, a small diplomatic nod in the direction of acknowledging that [the government] is now in a position where [it] can’t pretend that what’s going on isn’t completely unacceptable.

But obviously it’s laughably, pathetically, too little, too late. It’s completely inadequate…Turkey isn’t currently in the position of going to Europe to ask for weapons, warplanes, tanks, heavy artillery. It’s already here. It’s already happening…The hospitals are overcrowded, people have died and people are dying right now only a few miles from where I’m [speaking].

So what we cannot do is accept this response as in some way adequate. We need to keep the pressure on.

[The campaigning that] we’re doing works, if this much action is taken they have to listen, they cannot continue to ignore it.

But what has happened so far is not the end of the story, and we need to keep that pressure up. In fact we need to take it up another step and insist that they take steps that actually make a difference.

They could [suspend] the licences that have already been granted to export arms to Turkey. And they can also take much greater diplomatic action, or put pressure on international institutions to take action against the invasion.

‘They will sit up and listen’

[The arms trade] is something that the richer western European countries tend to participate in very heavily whilst failing to take any responsibility for the wars that those weapons are used in.

When we organise around those issues we’re showing that culpability and we’re putting the blame where it should be.

[One] reason why there’s a meaningful and long tradition of resistance [against the arms trade] is that we’re hitting them right where it hurts, which is in the profit. If we can find some way to stop the military industrial complex, even just for a moment, they will start to lose money, and then they will sit up and listen.

We need to take action

We need to take action to force the British government to suspend all existing arms export licences to Turkey. More than that, we need to stand with the people of northern Syria who are calling for a boycott of Turkey and an internationally imposed ‘no-fly zone’ to stop Turkey’s massacre. As many of those opposing the invasion have been repeating: “The people of Rojava can hear us, stay on the streets!”

Riseup4Rojava and Boycott Turkey are calling on people globally to take action against the companies supplying arms to Turkey. 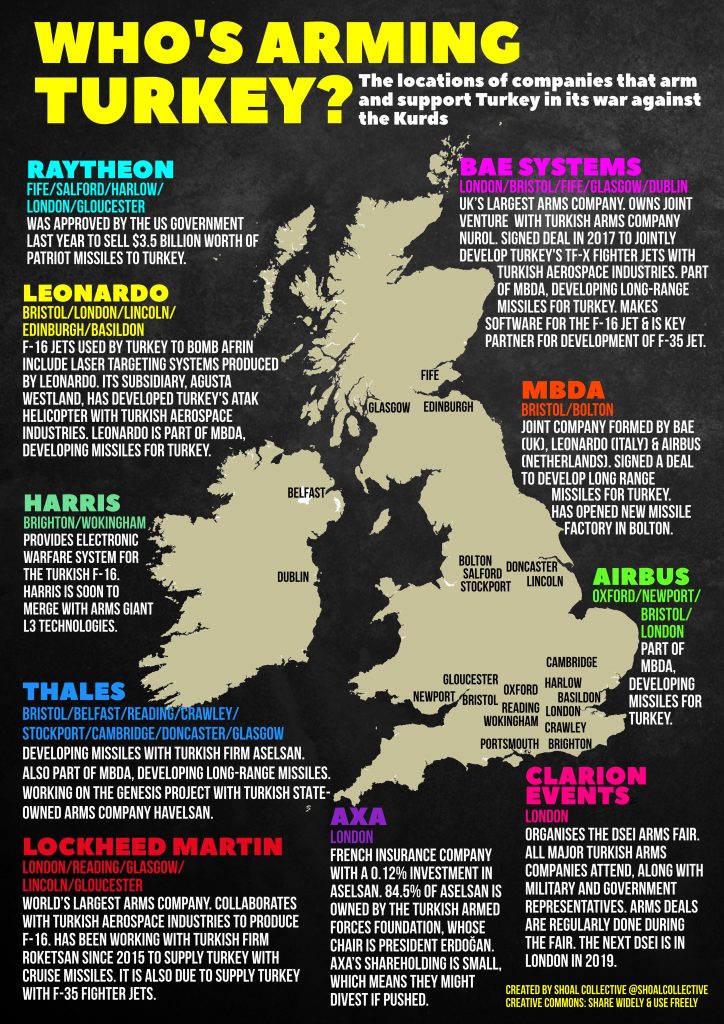 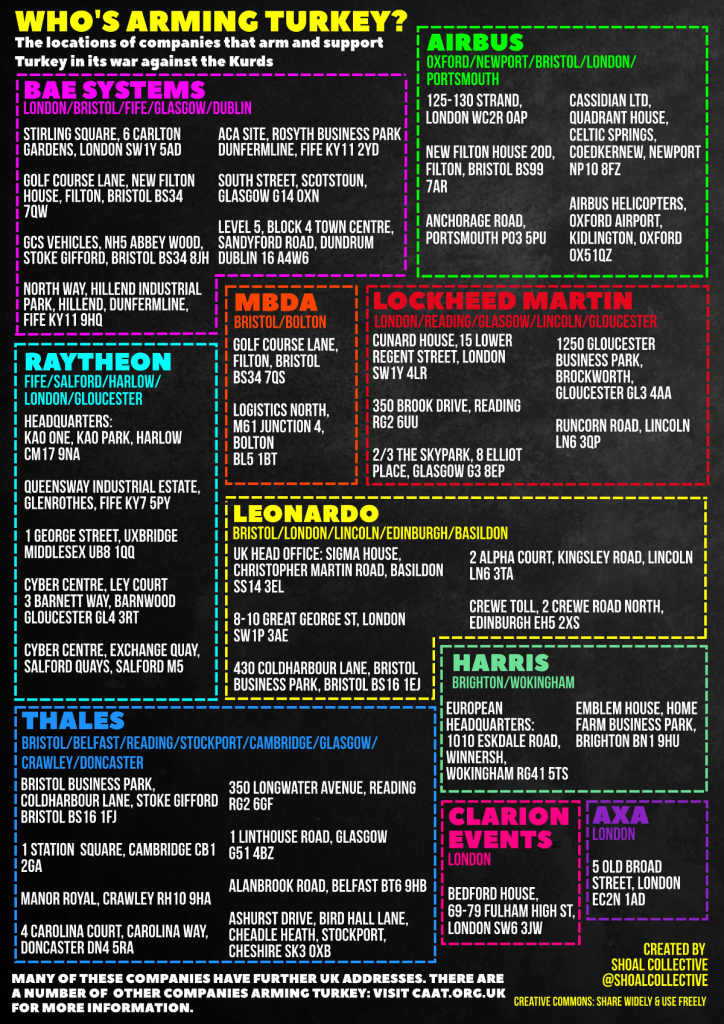