With just one tweet, the youngest ever MSP destroys Trump's drivel on Turkey's invasion of Syria - Canary 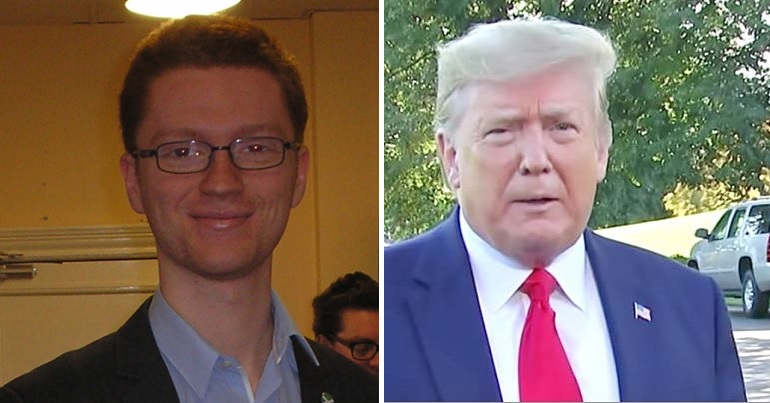 Ross Greer, the youngest ever member of the Scottish parliament (MSP), has brilliantly taken down Donald Trump’s latest drivel on Turkey’s illegal invasion of northern Syria (aka Rojava).

NATO’s second largest army is currently attacking Kurdish-led defence forces in Rojava which played a key role in defeating Daesh (Isis/Isil) in Syria (over 11,000 Rojavan fighters died in this war). Rojava has also been a strong opponent of Daesh ideologically, forging a green democratic revolution which is feminist, socialist, and opposes all religious and ethnic discrimination. On 16 October, however, Trump gifted Turkish-led invaders by shamelessly echoing propaganda that Turkey uses to try and discredit its opponents. With no evidence, he claimed that the left-wing Kurdistan Workers’ Party (PKK) was somehow “worse at terror, more of a terrorist threat in many ways, than ISIS”.

Journalist Lindsey Hilsum, who previously called out Turkey’s “ethnic cleansing” during a frank report on its invasion, also chimed in, saying:

This is just extraordinary. On no planet are the PKK a greater threat than ISIS. They’re not even a greater threat to Turkey let alone the US, where they’re no threat at all. Trump parroting Erdogan. https://t.co/74xtAcEi0d

What happened in Sinjar?

In 2014, Daesh committed war crimes against the Yazidi minority group in Sinjar, Iraq. A UN commission said in 2016 that “genocide has occurred and is ongoing”. Daesh reportedly killed over 3,000 Yazidis in its 2014 attack, and kidnapped around 6,800 more to use as sex slaves or fighters.

The official army in charge of protecting Sinjar in 2014 allegedly withdrew as Daesh advanced. So as the disaster unfolded, Rojava’s People’s Protection Units (YPG) and Women’s Protection Units (YPJ) moved across the border, stepping in to create a humanitarian corridor for Yazidi civilians to escape to Syria. Their PKK allies soon joined the rescue efforts. The YPG/YPJ and PKK then fought alongside the Yazidi Sinjar Resistance Units (YBŞ) and Sinjar Women’s Units (YJŞ) to defeat Daesh. As part of a broad alliance, they liberated the town in 2015.

What is the PKK?

Turkey has a large Kurdish population, and a long history of repression and massacres in these communities. After the Second World War, this repression spread to anything left-wing amid ‘anti-communist’ fervor. The PKK arose in this context, and Turkey has now fought against it for decades. There have been big losses on both sides (as in most conflicts, civilians were often caught in the middle). But today, the PKK and its allies condemn all attacks on civilians. And it has reportedly never attacked Western targets.

As academic Dilar Dirik wrote in 2014:

The PKK started out with the aim of an independent Kurdish state in the 1970s, but long transformed its vision and now advocates regional autonomy or “democratic confederalism” through grassroots democracy, gender equality, and ecology

What’s the PKK got to do with Turkey’s invasion of Rojava?

Since 2015, Turkish leader Recep Tayyip Erdoğan has sought to repress all of his political opponents by labelling them either terrorists or terrorist sympathisers (and killing or arresting them accordingly). It’s a cynical tactic, but it plays to his fans, who support his strongman mix of Islamism and Turkish nationalism. His war on the Kurdish minority community in Turkey, meanwhile, has provided the perfect progressive opponent for his hybrid hard-right dogma. According to the Permanent Peoples’ Tribunal, Erdoğan and his regime have committed numerous war crimes in the process.

European courts have criticised the smearing of Erdoğan’s progressive opponents as ‘terrorists’, insisting that the PKK is a “party to an armed conflict”.

Erdoğan ended peace talks with the PKK in 2015, partly due to the success of the Rojava Revolution, which had given hope to Kurds and progressives campaigning for democracy in Turkey. And because Rojava’s ideology is inspired by the founder of the PKK, Turkey has consistently attacked its left-wing revolution (allying itself with fascists and extremist groups similar to al-Qaeda and Daesh in the process). The NATO power has been stepping up its attempts to destroy Rojava since at least 2018.

Not only is the current Turkish regime an alleged war criminal; its mercenaries also continue to commit crime after crime with impunity. Trump may be playing along with Turkish state propaganda about the PKK and Rojava, but the international community must not. Progressives and democrats around the world must stop Turkey from terrorising Kurdish communities; and we must do it as a matter of urgency.