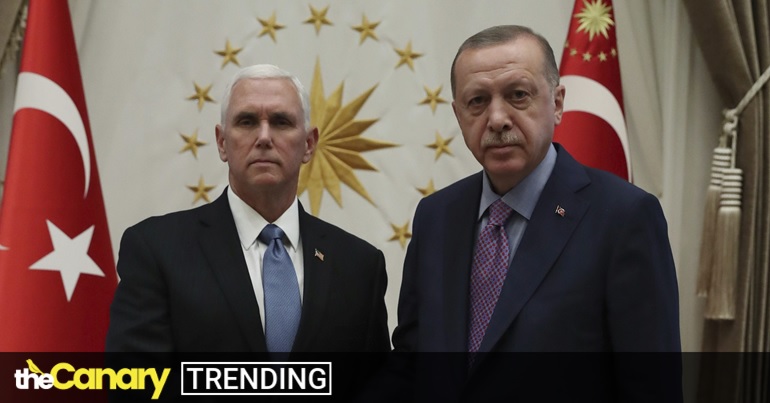 US vice president Mike Pence has said Turkey has agreed to a ‘ceasefire’ in northern Syria (aka Rojava) after a high-level delegation of US officials met with Turkish leader Recep Tayyip Erdoğan in Ankara, Turkey. Pence said there would be “a pause” in Turkey’s illegal invasion “for 120 hours” to allow Kurdish-led defence forces in the region to withdraw from their own territory. But while Donald Trump called this “great news”, local people and their supporters totally disagreed with that assessment.

Local forces in Rojava suggested the deal looked more like “surrender” than a “ceasefire”:

-"Ceasefire is one thing and surrender is another, we are ready to defend ourselves"

-"We welcome the ceasefire, but we will defend ourselves in the event of an attack"

They also reiterated their rejection of Turkey’s plans:

N/E Syria Official Aldar Khalil:
We've previously stated that the proposal of Turkey's entering a depth of 30 km inside Syrian territories, is rejected.

Call from Aldar Xelil:They may have had to cease at the moment, but after 5 days they can reorganize and attack more violently.The occupation did not end. We call on our people, the forces of democracy and the world public to be sensitive and to maintain resistance and support🕊

Before Turkey’s invasion, the US had convinced Rojavan forces to lower their guard. It then reportedly colluded with its NATO ally’s assault, with CNN reporting that:

The US also gave Turkey access to airspace and intelligence on the area… . The US said it was working days before Turkey launched the offensive.

Turkey’s invasion has so far killed dozens of civilians, created around 200,000 refugees, and allowed hundreds of Daesh supporters to escape detention. The invaders are also allegedly committing war crimes.

With the above in mind, one critic questioned why Rojavan defence forces in the SDF would trust the US and Turkey now:

What reason would the SDF have to agree to this deal? They already made a deal. The US and Turkey broke it. Why do it again?

People in Rojava have built a green democratic revolution in the middle of Syria’s brutal war. Its system is feminist, socialist, and opposes all religious and ethnic discrimination. And both militarily and ideologically, it played a key role in defeating Daesh in Syria, gaining limited support from the West in the process. Over 11,000 of its fighters died in this war.

Some commentators stressed that the US-Turkish deal essentially amounted to the destruction of Rojava’s revolution:

#BREAKING The document of the ceasefire between the US and Turkey.

⏺️YPG will withdraw as far as 32km
⏺️YPG will be disarmed.
⏺️YPG fortifications will be destroyed.

In short, there will be nothing called ROJAVA pic.twitter.com/E5STF9llLD

You can't invade a neighbouring country, attempt to ethnically cleanse their people and then claim that a "ceasefire" entails occupying their land and removing their people. This is a pathetic attempt to paint warcrimes as peacemaking. Classic American imperialism

And one journalist tweeted:

This deal sounds like a massive crock of shit, including a US tacit assistance of significant forced population movement. Easy to get a ‘ceasefire’ when you grant one side everything it wants and browbeat the other with it’s own vulnerability. https://t.co/NE3hLY2Nfz

Others have stressed that this is simply “ethnic cleansing by international agreement”:

To be totally clear, Turkey and the US are demanding that Kurdish defense forces withdrawn from Kurdistan. That's the effect of a 'safe zone' which covers almost every population centre in Syrian Kurdistan.

The terms of this ceasefire would appear to mean leaving Kobane, Qamlishi, and all points in between to the mercy of the Turks and their proxies.

This is not a "peaceful resolution". This is ethnic cleansing.

Critics have long highlighted evidence of Turkish collaboration with Daesh and other far-right extremists. And in 2018, the Permanent Peoples’ Tribunal ruled that Erdoğan and his regime had committed war crimes against Kurdish people at home and abroad.

Now, the US seemingly wants local forces in Rojava to let Turkish-led invaders take over their land. And it seems no one is willing to accept that.