After Corbyn goes, the aspiration for public ownership must remain - The Canary 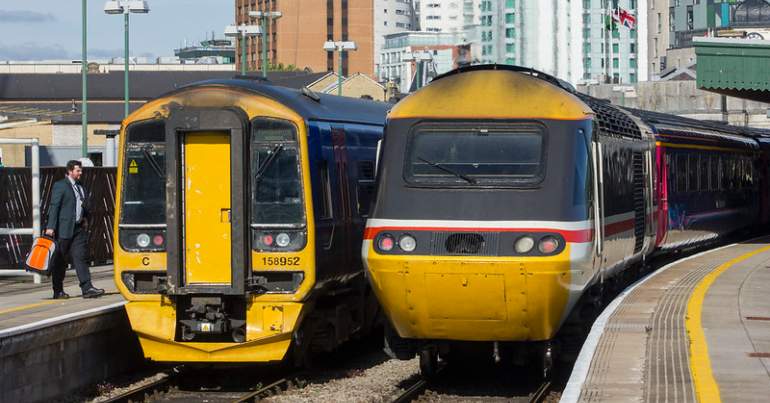 Following the devastating loss for Jeremy Corbyn’s Labour Party in the 12 December election, the Labour right has already been crowing about how the result ‘proves’ that Corbyn and “the far-left” were “toxic”. As the recriminations gather steam, there will inevitably be calls for the party to drop its commitment to renationalising the UK’s railway and utility companies. Progressives must stand firm in resisting such pressure. The evidence is overwhelming that public ownership is sound policy that enjoys strong public support.

Historical memory about public ownership has been misshaped by years of propaganda in the mainstream media. Even one article in the nominally progressive Guardian encouraged readers to “forget the nostalgia for British Rail”. But the reality is that privatisation has never been popular.

Even Margaret Thatcher opposed selling off the publicly-owned British Rail. It was left to her successor John Major to do so in 1993. And at the time, the move was widely unpopular both in parliament and among the wider public. Much of the opposition came from within his own party. The Transport Select Committee, which was chaired by Tory MP Robert Adley, fiercely criticised the proposal. A revolt against the bill in the House of Lords was led by former Conservative Party minister Lord Peyton of Yeovil. And even Thatcher’s deputy William Whitelaw opposed the move.

Indeed, there is lingering support for renationalisation amongst conservative commentators. Even the usually hard-right Mail on Sunday columnist Peter Hitchens, for example, consistently expresses his fierce opposition to railway privatisation, as has the Telegraph‘s Andrew Martin.

Their views are hardly unusual. Just a few years after privatisation, 73% of all voters supported renationalising Railtrack, according to a 1999 Guardian/ICM poll. Today, the British public overwhelmingly supports renationalising not just the railways but also the water and energy companies, the bus system, and the Royal Mail. A YouGov poll taken in May 2017 found at least 50% support for nationalisation of all of these sectors. And in spite of the fierce smear campaign against Jeremy Corbyn by the media and the Labour right, this support has actually increased since he became Labour leader in 2015.

When you look at the facts, it’s not hard to see why. Customers have faced years of price increases from these private companies across the board. For instance, the energy companies British Gas, EOn, Scottish Power and EDF raised their prices twice in 2018. During the same year, energy prices increased by 21% in just five months.

The reason for this price gouging is simple. The current privatised system creates a huge overhead from profiteering by greedy corporate managers and shareholders. To take just one example, in the very same year that these increases took place, the CEO of Centrica, the parent company of British Gas, received a 44% pay boost. This increased his already obscene 2017 pay package of £1.7m up to £2.4m thanks to not one, but two, bonus payments worth £388,000 each.

As for the shareholders, their profiteering is just as obscene. Utility companies pay unusually high dividends to their shareholders – creating a further overhead that gets passed on to consumers in the form of high prices. In fact, the stocks of the aforementioned Centrica paid the highest dividends of any FTSE company in the UK in 2018.

These high dividends result from the fact these companies are natural monopolies. As a result, utility bills have very low price elasticity – i.e. prices can go up with little effect on demand. This means that private utility companies can keep rising prices again and again without consequence.

As a result of these entrenched capitalist interests within the privatised system, a campaign of misinformation has arisen to provide bogus justification for the maintenance of the status quo. For example, there is ample fear-mongering about how pension funds are invested in the shares of these privatised companies. However, the reality is that pension funds own only 5% of the water and energy company stocks.

Present-day Conservative Party politicians and their cheerleaders in the right-wing tabloids love to pontificate about how British Rail ‘ran at a loss’ and was somehow ‘inefficient’. What they fail to mention is that the current system operates under considerable debt. As a result, a large proportion of spending within the railway industry is on interest payments for this debt. In some years, more has been spent on interest payments than track maintenance.

With respect to the purported inefficiencies of public ownership, they have this exactly the wrong way around. The reality is that natural monopolies tend to function better in the public sector whereas privatisation breeds inefficiency.

As a result of the above, the British government has had to subsidise the railway industry with about £5bn of taxpayer money every year. So in a cruel irony, the government has to prop up the system with public money without having any meaningful control over its operation. Worse still, it means that the taxpayer is subsidising parasitic shareholder profiteering.

To be sure, there were problems with British Rail. But they resulted not from any inherent failure of public ownership, but from years of underfunding by successive Conservative governments. This was done as part of the classic neoliberal three-card trick described by US author Thomas Frank in his book The Wrecking Crew. Frank explains how right-wing governments underfund public services deliberately in order to make them fail and then present this failure as ‘proof’ of the need to privatise them.

And even if publicly-owned rail did, by its nature, have to be run at a loss, one has to consider whether this is really a problem. As US-born travel writer Bill Bryson put it:

the grounds that it doesn’t pay its way… is the most mad and preposterous line of argument imaginable. We’ve been hearing this warped reasoning for so long about so many things that it has become received wisdom, but when you think about it for even a nanosecond it is perfectly obvious that most worthwhile things don’t begin to pay for themselves. If you followed this absurd logic for any distance at all, you would have to get rid of traffic lights, lay-bys, schools, drains, national parks, museums, universities, old people and much else besides. So why should something as useful as a railway line… have to demonstrate even the tiniest measure of economic viability to ensure its continued existence?

A final thing to consider is the experience of other European countries. Though some have regrettably introduced a degree of privatisation (with similarly negative consequences), they have generally resisted going as far down the rabbit hole as the UK. As a result, they consistently offer passengers much lower fares when compared with the UK.

But one does not even need to look outside the UK’s own borders to see the success of public ownership. Scotland and the north of Ireland both successfully operate their water systems under public ownership, while Wales operates on a not-for-profit basis. The private water companies in England, on the other hand, have been embroiled in a series of controversies including multi-million-pound fines for sewage leaks into their water supply.

Staying on message in the post-Corbyn era

The Labour membership needs to keep public ownership at the heart of the party’s project. As Corbyn steps down from the leadership, Blairites will no doubt attempt to move the party back to the dark days of neoliberalism-lite. Both they and their Tory ideological brethren need to be called out on their nonsense. For they are exactly the kind of people Oscar Wilde had in mind when he spoke of those who know “the price of everything, and the value of nothing”.