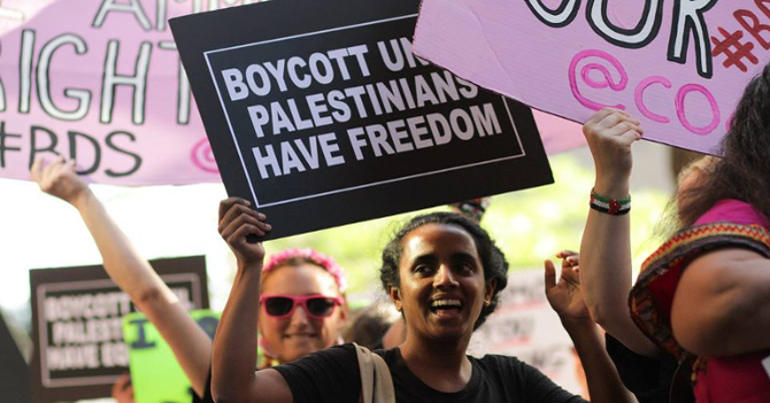 BDS is an international movement calling for a boycott of Israeli goods. It also calls for grassroots groups to initiate boycott campaigns against companies complicit in Israeli war crimes. According to the BDS movement’s website:

Boycott, Divestment, Sanctions (BDS) is a Palestinian-led movement for freedom, justice and equality. BDS upholds the simple principle that Palestinians are entitled to the same rights as the rest of humanity.

This week, Tory peer Eric Pickles recorded this video. The message was tweeted out by Conservative Friends of Israel:

BDS… is an organisation devoted to boycotting and removing investment from Israel, one of our key allies. And we’re going to ensure that public sector, places like councils and health authorities, can’t work against Israel, can’t prejudice Israel.

The new plans were also mentioned in the Queen’s speech on 19 December.

Boris Johnson’s government has joined the likes of Trump in repressing citizen-led nonviolent action in support of human rights, targeting in particular solidarity with Palestinians and divestment from Israel´s regime of occupation and apartheid.

Supporters of freedom of expression and human rights for all should oppose Johnson’s efforts to repress our peaceful movement for freedom, justice and equality, and should support local democracy and ethical investments.

Not just about boycotting Israel

The Conservative plans won’t just affect the Palestinian movement for BDS. It could affect other movements, such as the Boycott Turkey campaign. The briefing paper for the Queen’s speech reads:

We will stop public institutions from imposing their own approach or views about international relations, through preventing boycotts, divestment or sanctions campaigns against foreign countries and those who trade with them.

This will create a coherent approach to foreign relations from all public institutions, by ensuring that they do not go beyond the UK Government’s settled policy towards a foreign country.

This wording clearly includes boycotts of any ‘foreign country’, not only Israel.

Responses from supporters of the boycott Turkey campaign

Berivan Qereçox, a British internationalist volunteer currently based in northeast Syria (aka Rojava) – a region which is currently under attack from Turkish invasion, told The Canary:

This new law is patently and obviously an attempt to cut off the possibilities that people have for interrupting the military-industrial complex and the war machine. It’s insane that public institutions won’t be allowed to [boycott].

The grounds that it’s justified on, I’m sure, will be the classic, liberal skewed idea of what freedom, or democracy or fairness means. The idea ‘that [public institutions] can’t be seen to be political, you have to be objective. Or it’s not fair on the poor little companies’ [that are targeted by boycotts], or whatever it is.

It just shows how much liberalism supports the status quo, and allows these fascist, authoritarian policies to be brought in, because it provides the morality for it.

Debra Allen, another British supporter of the Boycott Turkey campaign, told The Canary:

This law is designed to prevent public institutions from expressing their own views and govern their own bodies independently from the government line. It’s another authoritarian clampdown on organisations and individuals who are standing in solidarity with communities targetted by oppressive regimes and nation states like Turkey and Israel.

We will continue our support for the BDS campaign which has a powerful international reach beyond the ability of this new Tory government to suppress.

If they are repressing us, then it must be working

Qereçox told The Canary that the Tory anti-BDS measures showed how effective the campaign has been:

On the plus side, I guess that if they’re going to all this trouble to make something illegal then that means it must be working. So that means we need to keep organising these [boycott campaigns] in different ways. Keep pushing, and keep coming up with new ways to attack all the different aspects of the war machine.

We need internationalism now more than ever

If the number of people who voted for the Tories in the recent UK election tells us anything at all, it shows that to achieve meaningful change in Britain we will need inspiration from outside. Boycott campaigns are a key tactic to connect with struggles for freedom around the world. But solidarity is very much a two-way process.

We need to defend internationalism. Not only so we can act in solidarity with others, but also because to unlock freedom and real democracy in our own lives, we need to see ourselves as part of a global, internationalist struggle.